Behold the Glories of the Lamb 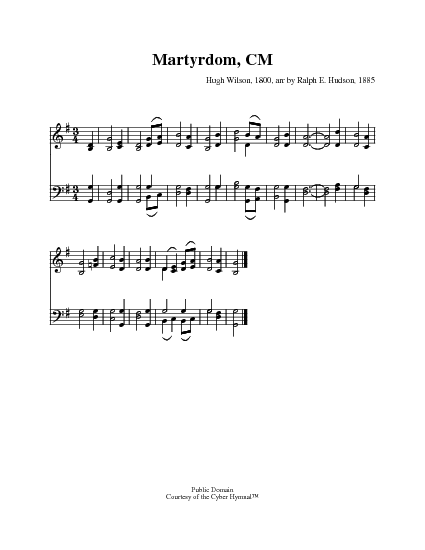 Behold the glories of the Lamb

Behold the glories of the Lamb. J. Watts. [Praise.] First published in his Hymns, &c, 1707 (2nd edition, 1709, Book i., No. 1), in 8 stanzas of 4 lines, and entitled, “A New Song to the Lamb that was slain." It is a paraphrase of a part of Rev. I. Watts's biographers state that this was his first hymn, and was written in 1696 in answer to a challenge that he could not produce better hymns than those by W. Barton (q. v.) which were sung in the Chapel in Southampton which he attended, and against which he had laid a complaint. In the Hymns, &c, stanzas iv. and v. are bracketed for omission if desired, and in the Baptist Psalms & Hymns, 1858, and others, this is done. In Darling's Hymns, 1886, it is given as "How great the glory of the Lamb." The use of the hymn is extensive, both in Great Britain and America.
In the Draft Scottish Translations and Paraphrases of 1745, a somewhat peculiar cento is given as No. ix. in 12 stanzas of 4 lines. It opens with this first stanza, and is thus composed: stanzas i., ii., iii, iv. corresponding stanzas from this hymn; stanza v. Watts; stanza vi. new; stanza vii. Watts. From this point stanzas viii. to xii. are Watts's "Come let us join our cheerful songs" (q. v.) slightly altered. In the authorized issue of the Translations and Paraphrases in 1781, there is another cento, opening again with the same stanza, but differing from the last. It is thus composed: stanzas i., ii., iii., iv. Watts, as above, with new alterations; stanza v. Watts, "Come let us, &c." as altered in 1745; stanza vi. Watts; vii. Watts altered; stanza viii. Watts, as above; stanza ix. from 1745; stanza x., xi. Watts, "Come let us, &c," slightly altered. This complicated arrangement was made by W. Cameron (q. v.) for the 1781 issue of the Translations &c, and has been in use in the Church of Scotland for 100 years. It is also found in a few modern hymnals. It was given in the Salisbury Hymn Book1857, No. 171, with slight alterations. Full recast text in modern copies of the Scottish Psalms, &c. This, in common with the original, is in use in America. From this arrangement in the Translations & Paraphrases, a cento is given in Stevenson's Hymns for the Church and Home, 1873, No. 92, as "Hark, how the adoring hosts." In this stanzas i.-iv. and x. are omitted.
In Miss J. E. Leeson's Paraphrases and Hymns, &c, 1853, this arrangement of the hymn is given with extensive alterations and additions, as No. 110 in 12 stanzas of 4 lines. Its use is limited, although stanzas ix.-xii. are very fine.

MILES LANE is one of three tunes that are closely associated with this well-known and beloved text; CORONATION is found at 471. Other hymnals also include the more florid DIADEM, composed by James Ellor in 1838 and noted for its elaborate choral harmo¬nization. MILES LANE was published anonymously…

All tunes published with 'Behold the Glories of the Lamb'^ top 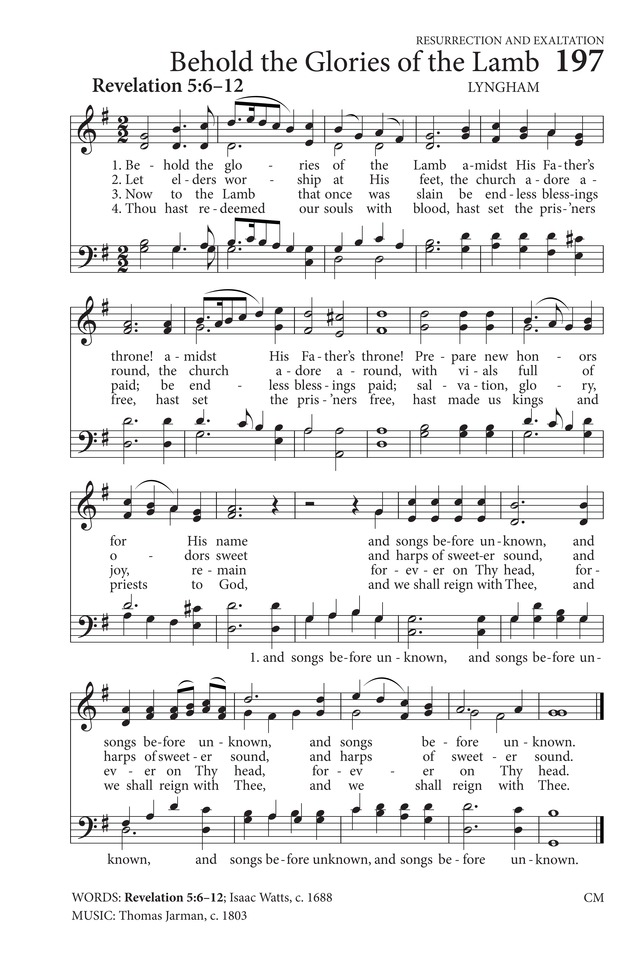