William Shrubsole (bap. 1760, d. 1806), organist. United Kingdom.When young, he sang in the choir at Canterbury Cathedral, He became organist at Bangor Cathedral, when he was dismissed for attending non-comformist meetings. He then became organist of Spa Fields Chapel, London, holding that post until his death. He was a successful teacher. He was an alto singer and sung at Westminster Abbey and Drury Lane churches. He knew Edward Perronet, who wrote the words to the hymn he composed music for. Perronet left Schrubsole property in his will. John Perry Not to be confused with W. (William) Shrubsole 1759-1829 bank clerk and hymn writer.  Go to person page >
^ top

MILES LANE is one of three tunes that are closely associated with this well-known and beloved text; CORONATION is found at 471. Other hymnals also include the more florid DIADEM, composed by James Ellor in 1838 and noted for its elaborate choral harmo¬nization.

MILES LANE was published anonymously with Perronet's first stanza in the November 1779 issue of the Gospel Magazine. The tune appeared in three parts with the melody in the middle part. Each "Crown him" was meant to be sung by a different part, first by the bass, then by the treble, and finally by the tenor. Thus MILES LANE was a fuguing tune. Stephen Addington identified William Perronet as the composer in his Collection of Psalm Tunes (1780). The tune's title comes from the traditional English corruption of St. Michael's Lane, the London street where the Miles' Lane Meeting House was located, of which Addington was minister.

William Shrubsole (b. Canterbury, Kent, England, 1760; d. London, England, 1806) composed MILES LANE when he was only nineteen. A chorister in Canterbury Cathedral from 1770 to 1777, Shrubsole was appointed organist at Bangor Cathedral in 1782. However, he was dismissed in 1783 for associating too closely with religious dissenters. In 1784 he became a music teacher in London and organist at Lady Huntingdon's Spa Fields Chapel, Clerkenwell, a position he retained until his death.

Shrubsole is the subject of a famous essay (1943) by Ralph Vaughan Williams (PHH 316): who called MILES LANE a "superb" tune and composed a concertato arrangement of it in 1938. Edward Elgar called it "the finest tune in English hymnody." MILES LANE has a wide melodic range and a most effective climax in the refrain, which could benefit from some rubato, especially at the end of stanza 4. Accompany and sing in a majestic manner.

Text: All Lands, to God in Joyful Sounds

With Heart and Voice: songs for all God's children #129

Text: All Hail the Power of Jesus' Name
^ top 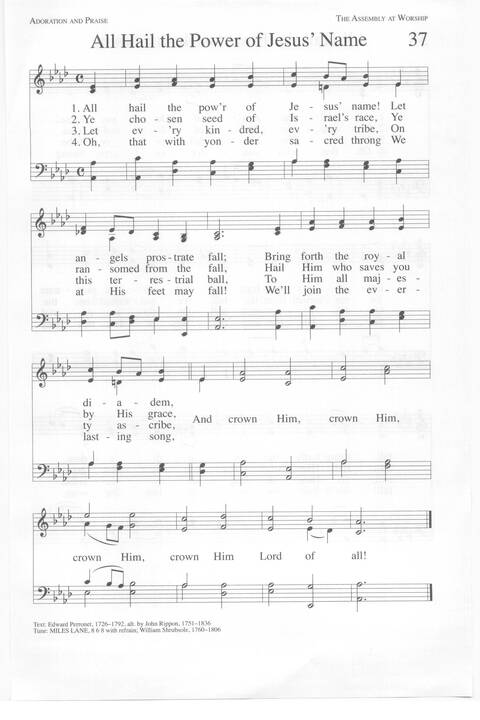 A New Hymnal for Colleges and Schools #22

Hymns of Glory, Songs of Praise #457a

Worship and Service Hymnal #111b