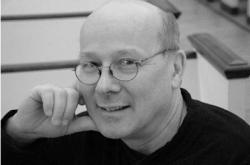 Andrew Donaldson, a composer and church musician, grew up in northern Ontario, Canada. He attended Glendon College, York University in Toronto, receiving a Bachelor of Arts degree in 1974. He went on to study classical guitar performance at the Royal Conservatory of Music in Toronto, receiving its ARCT (Associate of Royal Conservatory Teachers) degree in 1979. Since then he has worked as a composer and performer in many contexts, in both French and English. Andrew co-edited the Book of Praise (1997), Presbyterian Church in Canada, with Donald Anderson. Their company, Binary Editions, continues to administer copyright for the PCC. In 2007 he was made a Doctor of Divinity, honoris causa, by Knox College of the University of Toronto, for… Go to person page >
^ top

Psalms for All Seasons #64B