Blessing God for His Goodness to Soul and Body Bless, O my soul, the living God. I. Watts. [Ps. ciii.] This is Pt. i. of his L.M. version of Ps. ciii., first published in his Psalms of David, &c, 1719, Pt. ii. being, "The Lord, how wondrous are His ways.” Both parts are in common use both in Great Britain and America. Pt. i. is in 8 stanzas, and Pt. ii. in 9 stanzas of 4 lines. In addition there are abbreviations of Pt. i., and a cento from Pts. i. and ii. in common use The most popular arrangement in modern American hymnals is that in Songs for the Sanctuary, N. Y., 1865, Laudes Domini, N. Y, 1884, and many others. It is composed of stanzas i., ii., iii., and viii., slightly altered. Other arrangements are also found both in Great Britain and America. A cento from Pts. i. and ii. appeared in Bickersteth's Christian Psalmody, 1833, and is made up of Pt.i. stanzas i.—iii., Pt. ii. stanzas iv. and v., and an additional stanza from another source. 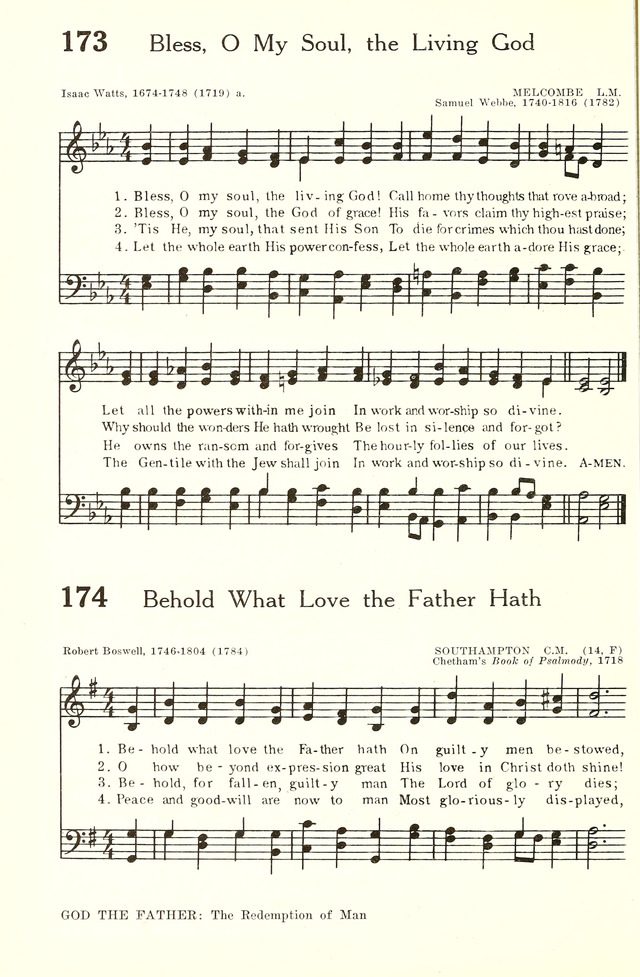 Psalms and Hymns and Spiritual Songs #4

The Harmonia Sacra #61B

The New Harp of Columbia, Restored Edition #36b