Blest are the pure in heart, For they shall see our God

1 Blest are the pure in heart,
for they shall see our God;
the secret of the Lord is theirs,
their soul is Christ's abode.

2 The Lord, who left the heavens
our life and peace to bring,
to dwell in lowliness with men,
their pattern and their King;

3 Still to the lowly soul
he doth himself impart,
and for his dwelling and his throne
chooseth the pure in heart.

4 Lord, we thy presence seek;
may ours this blessing be;
give us a pure and lowly heart,
a temple meet for thee.

Source: Ancient and Modern: hymns and songs for refreshing worship #602

Bless'd are the pure in heart. J. Keble. [Purification.] This poem, in 17 stanzas of 4 lines, is dated "Oct. 10, 1819." It was first published in his Christian Year, 1827. As a whole it is not in common use. The following centos; some of which are found in numerous collections, have been compiled therefrom:—
1. In J. Bickersteth's Psalms & Hymns, 1832, No. 449, we have stanzas i. and xvii. This was repeated in Elliott's Psalms & Hymns, 1835, No. 258, as "Blest are the pure," &c. Although it has fallen out of use in Great Britain, it is still given in a few American collections, as the American Methodist Episcopal Hymns, 1849; The Evangelical Hymnal, N. Y., 1880.
2. In his Mitre Hymn Book, 1836, W. J. Hall published a cento, as No. 249, which was composed of two stanzas from this poem, and two that were new. By whom this cento was arranged, by Hall, or his collaborator, E. Osier, is not known, as the H. MSS. simply say "Keble."
In Murray's Hymnal, 1852, No. 122, this cento was repeated with slight alterations, and the addition of a doxology. This text, sometimes with, and again without a doxology, has been adopted by most of the leading hymnals in Great Britain, and a few in America, including Hymns Ancient & Modern; the Hymnary; Church Hymns; the H. Companion; Thring; the Baptist Hymnal; the American Sabbath Hymn Book, N. Y., 1858, and others. In a note to this cento, No. 141, in the 1st edition of Hymns Ancient & Modern, Mr. Biggs, in his Annotated Hymns Ancient & Modern, quotes these words from Keble: "Hymn No. 141 is materially altered; not, however, without asking the writer's leave, Rev. J. Keble." Whether this leave was given to Hall, in the first instance, in 1836, or to Mr. Murray on adopting Hall's text in 1852, cannot now be determined.
3. In several American collections, Hall's cento is repeated with the omission of stanza ii. These include Songs for the Sanctuary, N. Y., 1865.
4. In the Hymns for Christian Seasons, Gainsburgh, 2nd edition, 1854, the cento is, stanzas i.-iv. are Keble's stanzas i., xii., xiv. and xvii. very much altered, and v. Hall, stanza iv.
5. In Alford's Year of Praise, 1867, No. 251, the cento is Keble, stanzas i., ii., iii., xv., and xvii.
6. In Nicholson's Appendix Hymnal, 1866, stanzas iv., viii.-x. are given as No. 19, beginning, "Give ear, ye kings, bow down."
In addition to these, other arrangements are sometimes found, but are not of sufficient importance to be enumerated.

All tunes published with 'Purity of Heart'^ top 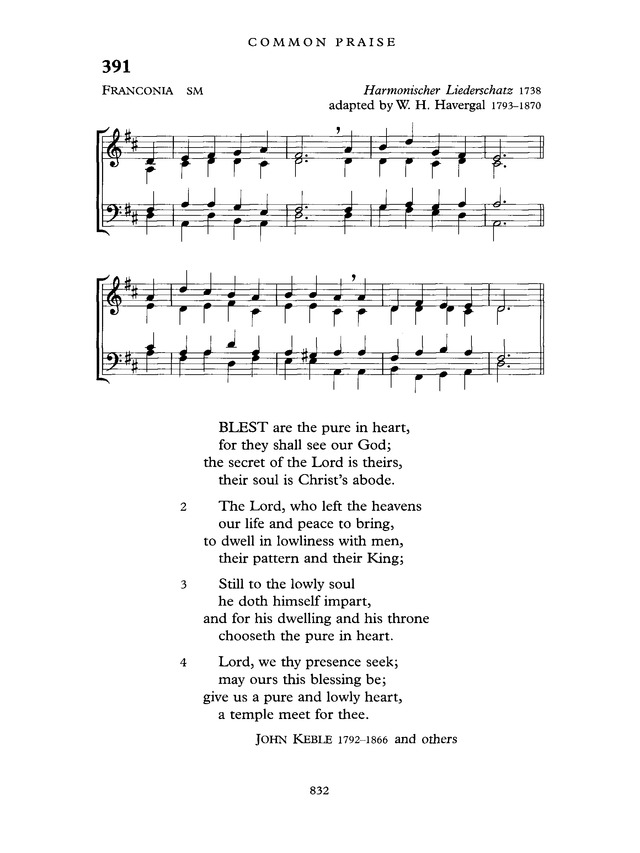 The Book of Hymns (A fresh anthology of favourite hymns) #33

The Song Book of the Salvation Army #411