1 O Jesus, I have promised
to serve thee to the end;
be thou forever near me,
my Master and my Friend;
I shall not fear the battle
if thou art by my side,
nor wander from the pathway
if thou wilt be my guide.


2 O Jesus, thou hast promised
to all who follow thee,
that where thou art in glory
there shall thy servant be;
and, Jesus, I have promised
to serve thee to the end;
O give me grace to follow,
my Master and my Friend.


3 O let me feel thee near me!
The world is ever near;
I see the sights that dazzle,
the tempting sounds I hear;
my foes are ever near me,
around me and within;
but Jesus, draw thou nearer,
and shield my soul from sin.


4 O let me hear thee speaking
in accents clear and still,
above the storms of passion,
the murmurs of self will.
O speak to reassure me,
to hasten or control;
O speak and make me listen,
thou guardian of my soul. 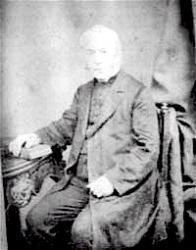 John E. Bode (b. St. Pancras, England, 1816; d. Castle Camps, Cambridgeshire, England, 1874) A fine student at Christ Church, Oxford, England, and a prominent scholar who gave the famous Bampton Lectures ("for the exposition and defense of the Christian faith") at Oxford in 1855, was a rector in Westwell, Oxfordshire, and in Castle Camps. This gifted poet and hymn writer published Hymns for the Gospel of the Day, for Each Sunday and Festivals of Our Lord in 1860. Bert Polman… Go to person page >
^ top

All tunes published with 'O Jesus, I have promised'^ top 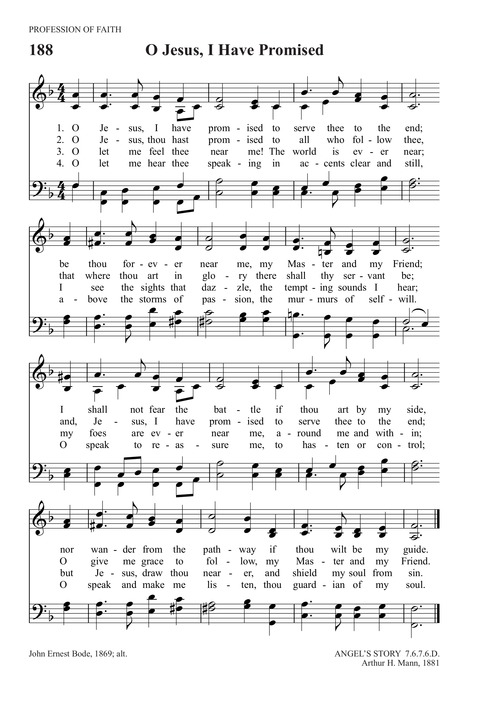 Hymns for a Pilgrim People #367

Hymns of Glory, Songs of Praise #644a

Hymns of Glory, Songs of Praise #644b

The Hymnal for Worship and Celebration #369

The Irish Presbyterian Hymbook #551a

The Irish Presbyterian Hymbook #551b

The Song Book of the Salvation Army #862