1 Christians, awake, salute the happy morn,
whereon the Savior of the world was born;
rise to adore the mystery of love,
which hosts of angels chanted from above;
with them the joyful tidings were begun
of God incarnate and the Virgin's son.


2 Then to the watchful shepherds it was told,
who heard th'angelic herald's voice: "Behold,
I bring good tidings of a Savior's birth
to you and all the nations on the earth:
this day hath God fulfilled his promised word,
this day is born a Savior, Christ the Lord."


3 He spake, and straightway the celestial choir
in hymns of joy, unknown before, conspire;
the praises of redeeming love they sang,
and heav'n's whole orb with alleluias rang;
God's highest glory was their anthem still,
peace on the earth, and unto men good will.


4 To Bethl'hem straight the happy shepherds ran,
to see the wonder God had wrought for man;
and found, with Joseph and the blessed maid,
her son, the Savior, in a manger laid;
amazed, the wondrous story they proclaim,
the earliest heralds of the Savior's name.


5 Oh, may we keep and ponder in our mind
God's wondrous love in saving lost mankind!
Trace we the babe, who hath retrieved our loss,
from his poor manger to his bitter cross.
Tread in his steps, assisted by his grace,
till our imperfect state God doth replace.


6 Then may we hope, th'angelic throngs among,
to sing, redeemed, a glad triumphal song;
he that was born upon this joyful day
around us all his glory shall display;
saved by his love, incessant we shall sing
eternal praise to heav'n's almighty King. 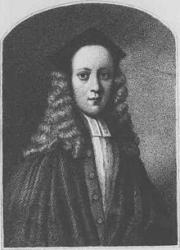 John Byrom was born in 1691, at Manchester, where his father was a linen-draper. He entered Trinity College, Cambridge, 1708; became a Fellow of the College in 1714; took his M.A. in 1716, and then proceeded to Montpelier, where he studied medicine. He afterwards abandoned medicine, settled in London, and obtained his living by teaching a system of shorthand, which he had projected. He was elected a member of the Royal Society in 1724. He died Sept. 28, 1763. The first edition of Byrom's poems appeared in 1773, in two volumes. A more complete edition was published in 1814. Byrom did not seek publicity as an author, but wrote verses only for recreation. --Annotations of the Hymnal, Charles Hutchins, M.A., 1872… Go to person page >
^ top

Christians, awake, salute the happy morn , p. 231, ii. Through the kindness and courtesy of Mr. Walter F. Browne, Acting Librarian of Chetham's Library, Manchester, we are enabled to give the following additional information concerning this hymn:—
Anent this hymn, "Christians, awake," the Master of Peterhouse [Cambridge] says, in vol. 34 of the Chetham Society's Publications, 1895, The Poems of John Byrom, 4 vols., vol. ii., Sacred Poems, Part i., p. 19:—

"The Chetham Library at Manchester preserves in the Librarian's room, carefully framed, the original manuscript of this famous hymn. The title is ‘Christmas Day for Dolly.' The verses were therefore designed by Byrom as a Christmas gift to his daughter Dorothy (born April 26, 1730, died unmarried, September 19, 1797). . . In a letter dated October 12, 1886, the late Mr. J. E. Bailey writes:—'I lately got an original broadside copy of Christians, Awake, most likely printed by Orion Adams, Smithy Door (Manchester). It has a woodcut, and is very carefully printed, showing, I think, that Byrom corrected it. The paraphrase, Hebrews i., is printed in another column beside the Christmas Hymn. It is stitched up with Adams's Manchester Weekly Paper for 1751. As on Christmas Eve, 1750, the organist "Wainwright and the singing men and boys of the old church came before Byrom's door to sing the hymn, this may be the date of its composition and sudden popularity."

It has been said that the poem appeared in Harrop's Manchester Mercury for 1746. On this point Mr. Browne says:—
"I have not a copy of Harrop's Manchester Mercury for 1746 in our library, but a former librarian conveyed the following information to me:—'This hymn was written in 1745 and printed in Harrop's Manchester Mercury in 1746.'"
From Dr. W. E. A. Axon's Annah of Manchester, 1886, p. 88, we find that the first number of Harrop's Manchester Mercury is dated March 3, 1752. This is conclusive against the printed date of the hymn being 1746. There is in the Manchester Free Reference Library an undated broadside containing Byrom's two Christmas hymns, "Christians! awake," and "God Who at sundry times in divers ways," which is regarded as the first printed copy of these hymns, but being without date it is of little value in determining the year in which the "Christmas Day for Dolly" was written. From the evidence before us the earliest date we can give to the hymn is 1750. Wainwright's tune, to which it was sung by his choir as noted above, is known by the varying names of "Yorkshire," "Stockport," and "Mottram."

John Wainwright (b. Stockport, England, 1723; d. Stockport, 1768) wrote YORKSHIRE for [the] text [Christian's awake, salute the happy morn, by John Byrom] in 1750. The tune was first sung on Christmas Day, 1750, in the parish church of Stockport; it was first published in Caleb Ashworth's Collection… 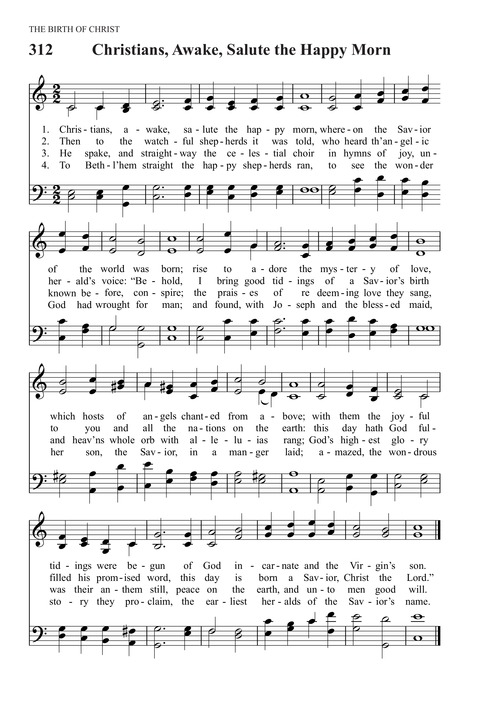 The Song Book of the Salvation Army #78