Come, ye that love the Lord

Come, ye that love the Lord, And let our joys be known

Come, we [ye] that [who] love the Lord. I. Watts. [Joy and Praise.] First published in his Hymns & Sacred Songs, 1707, and again, 2nd ed., 1709, Bk. ii., No. 30, in 10 stanzas of 4 lines, and entitled "Heavenly Joy on Earth." In its original and full form it is rarely found in modern collections, the New Congregational Hymn Book, 1859, No. 693, and the Baptist Psalms & Hymns, 1858-80, being exceptions with the alteration of stanza iii., line 3, of "fav'rites" to "children." It has undergone many alterations and revisions. Of these the principal are:—
1. "Come ye that love the Lord." This was given by J. Wesley in his Psalms & Hymns, published at Charlestown, U. S., 1736-7, during his stay in Georgia. In this form stanzas ii. and ix. are omitted, and the rest are considerably altered. After slight revision this text was repeated by Wesley in the Wesleyan Hymn Book, 1780, and is in the revised edition, 1875, and in most collections of the Methodist communion.
2. "Come ye who love the Lord." This reading of the first line was given by Cotterill in the 8th ed. of his Selection, 1819, and is followed in Hymnal Companion and others.
The different arrangement of stanzas, and the variations in the text which have been adopted by the numerous editors who have used it in one form or another may be counted by the hundred. The example set by Wesley in 1736, was followed by Whitefield, 1753; Madan, 1760; Conyers, 1772; Toplady, 1776, and onwards to the latest modern collection. No text can, as a rule, be relied upon. The original is easy to obtain in modern editions of Watts. The hymn, as a whole, is regarded as a good specimen of Watts's powers.

All tunes published with 'Come, ye that love the Lord'^ top 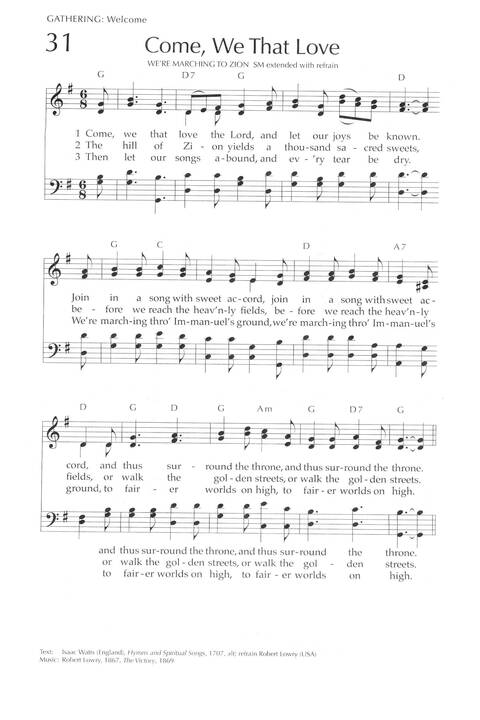 Great Songs of the Church (Revised) #68

Hymns for a Pilgrim People #427

Hymns of the Christian Life #353

Hymns to the Living God #18

Lift Every Voice and Sing II #12

Sacred Selections for the Church #2

Display Title: We're marching (on) to Zion First Line: Come, we that love the Lord, and let our joys be known Tune Title: MARCHING TO ZION Date: 2006
The Christian Life Hymnal #584

The Hymnal for Worship and Celebration #18

The Hymnal for Worship and Celebration #555

The Sacred Harp #31b

The Sacred Harp #31b

The Sacred Harp #52a

The Song Book of the Salvation Army #314

Welsh and English Hymns and Anthems #52b