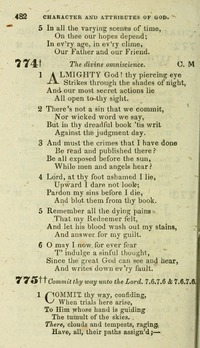 1 Commit thy way, confiding,
When trials here arise,
To Him whose hand is guiding
The tumults of the skies.
There clouds and tempests, raging,
Have each their path assigned;
Will God, for thee engaging,
No way of safety find?


2 Trust in the Lord! His favor
Will for thy wants provide;
Regard His word!--and ever
Thy work shall safe abide.
When sorrows here o'ertake thee,
And self-inflicted care,
Let not thy God forsake thee!
He listens for thy prayer.


3 Should Satan league his forces,
God's purpose to withstand,
Think not their rage and curses
Can stay His lifted hand!
When He makes known His pleasure,
The counsel of His will,
That, in its utmost measure,
Will He at last fulfill.


4 Hope on then, weak believer,
Hope on, and falter not!
He will thy soul deliver
From deeps of troubled thought.
Thy graces will He nourish,
With hope thy heart employ,
Till faith and hope shall flourish
And yield their fruits of joy.


5 Well blest, His grace receiving,
God owns thee for a son!
With joy, and with thanksgiving,
Behold the victor's crown!
Thy hand the palm-branch raises,
God gives it thee to bear;
Then sing aloud His praises,
Who has removed thy care.


6 The sorrows, Lord, that try us,
O bring them to an end!
With needed strength supply us!
Thy love to us commend!
That we, till death pursuing
Thy best, Thy chosen way,
May then, our life renewing,
Praise Thee in endless day.

Mills, Henry, D.D., son of John Mills, was born at Morriston, New Jersey, March 12, 1786, and educated at the New Jersey College, Princeton, where he graduated in 1802. After being engaged in teaching for some time at Morristown and elsewhere, he was ordained Pastor of the Presbyterian Church of Woodbridge, New Jersey, in 1816. On the opening of the Auburn Theological Seminary in 1821, he was appointed Professor of Biblical Criticism and Oriental Languages, from which he retired in 1854. He died at Auburn, June 10, 1867. In 1845 he published Horae Germanicae; A Version of German Hymns. This was enlarged in 1856. The translations are not well done, and very few are now in common use, although 18 and 9 doxologies were given in the Lutheran Ge… Go to person page >
^ top

Befiehl du deine Wege. P. Gerhardt. [Trust in God.] This hymn, which Lauxmann in Koch, viii. 392, calls "The most comforting of all the hymns that have resounded on Paulus Gerhardt's golden lyre, sweeter to many souls than honey and the honey-comb," appeared as No. 333 in the Frankfurt edition, 1656, of Crüger's Praxis pietatis melica. Thence in Wackernagel's edition of his Geistliche Lieder, No. 66, and Bachmann's edition, No. 72, in 12 stanzas of 8 lines, and included as No. 620 in the Unverfälschter Liedersegen, 1851. It is an acrostic on Luther's version of Ps. xxxvii. 5, "Befiehl dem Herren deine Wege und hoffe auf ihn, er wirds wohl machen," formed by the initial words of the stanzas, those in Wackernagel’s edition being printed in blacker type.
The hymn soon spread over Germany, found its way into all the hymn-books, and ranks as one of the finest hymns of its class. Lauxmann relates that it was sung when the foundation stone of the first Lutheran church at Philadelphia was laid, May 2,1743, and again on Oct. 20, when the Father of the American Lutheran Church, Heinrich Melchior Muhlenberg, held the opening service.

All tunes published with 'Commit thy way, confiding'^ top 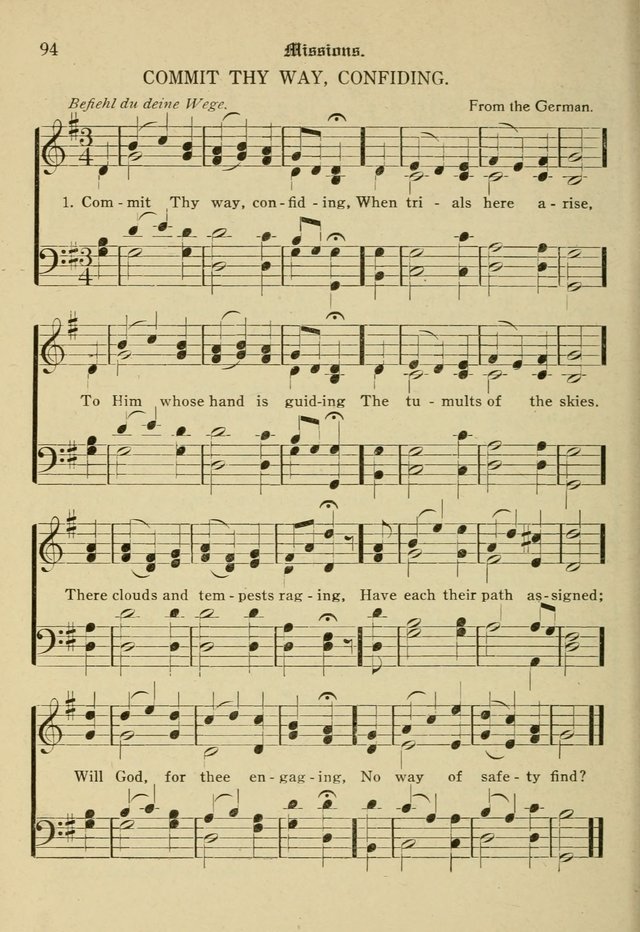 Songs of Praise for Sunday Schools, Church Societies and the Home #d51