Creator Spirit, by whose aid

Creator Spirit, by Whose aid

1 Creator Spirit, by whose aid
the world's foundations first were laid,
come, visit ev'ry waiting mind;
come, pour your joys on humankind.
From sin and sorrow set us free;
may we your living temples be.


2 O Source of light, our Counselor
the Father's help to us assure,
Come down, as promised, with your fire,
and hearts with heav'nly love inspire.
Your sacred, healing message bring
to sanctify us when we sing.


3 Giver of grace, descend from high
in answer to our earnest cry.
Help us eternal truths receive
and practice all that we believe.
Give us your wisdom that we see
the glory of the Trinity.


4 Immortal honor, endless fame,
attend th'almighty Father's name;
the Savior-Son be glorified,
who for all humankind has died;
and equal adoration rise
to you, O Spirit, in the skies.

Rabanus Maurus (c. 776-856) or Hrabanus Magnentius Maurus, was born of noble parents at Mainz, and educated at Fulda and Tours under Alcuin, who is reputed to have given him the surname, Maurus, after the saint of that name. In 803, he became director of the school at the Benedictine Abbey at Fulda. He was ordained priest in 814, spending the following years in a pilgrimage to Palestine. In 822, he became Abbott at Fulda, retiring in 842. In 847, he became archbishop of Mainz. He died at Winkel on the Rhine, February 4, 856. This distinguished Carolingian poet-theologian wrote extensive biblical commentaries, the Encyclopaedic De Universo, De Institutione Clericorum, and other works which circulated widely during the Middle Ages. Som… Go to person page > 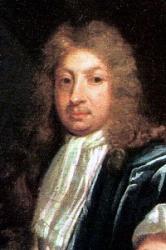 Dryden, John. The name of this great English poet has recently assumed a new importance to the students of hymns, from a claim made on his behalf in regard to a considerable body of translations from the Latin published after his death (1701), in a Primer of 1706. The discussion of this point will preclude us from giving more than an outline of his life. i. Biography.—John Dryden was the son of Erasmus, the third son of Sir Erasmus Dryden, and was born at Aid winkle, All Saints, Northants, Aug. 9, 1631. He was educated under Dr. Busby at Westminster, and entered Trip. College, Cambridge, in 1650. He took his B.A. in 1654, and resided nearly 7 years, though without a fellowship. He was of Puritan blood on both his father's and mother's… Go to person page >
^ top

The ninth-century Latin hymn "Veni, Creator Spiritus" is the basis for this text as well as 426. Almost as well known as the earlier "Te Deum Laudamus" (504),”Veni, Creator Spiritus” is an anonymous hymn; it has been attributed to Rhabanus Maurus (776-856), but with no solid proof to date. The Hymnal 1982 Companion provides the following information:

Of all Latin Hymns, this has probably been the most familiar to Anglicans throughout the centuries. Most likely written in the ninth century, it has been in continuous use in English coronation rites since the accession of Edward II in 1307. . . . Its original use is unknown, but it has been sung at various Pentecost offices at least since the tenth century and at ordination services at least since the eleventh (Vol. Three B, pp. 502-503).

Several translations are in use, all rather free paraphrases from the Latin. The translation provided here is by John Dryden (b. Aldwinkle, Northamptonshire, England, 1631; d. London, England, 1700), published in his Miscellany Poems (1693). One of the prime literary figures of his time, Dryden received his education at Trinity College, Cambridge, England. His first major poem was "Heroic Stanzas on the Death of Oliver Cromwell." After James I was restored to the throne, Dryden became both a royalist and Roman Catholic. At the height of his career he was appointed poet laureate and royal historian. Because he remained a Roman Catholic when the Protestants William and Mary came to the throne in 1688, he lost his official positions. A writer of plays, poems, odes, and satires, Dryden also translated the works of classical poets such as Virgil and Bocaccio. His English translations of Latin hymns were published posthumously in The Primer of Office (1706).

The text is a prayer for the creative, dynamic work of the Holy Spirit in God's people. The prayer is cast in older English expressions: "Paraclete" is Greek for comforter, advocate, or counselor (st. 2); "sevenfold energy" is based on the medieval reading of Isaiah 11:2, in which the Hebrew list of six characteristics of the Spirit was mistakenly translated into the Latin Vulgate as seven traits, thereby spawning a medieval tradition of "sevenfold . . . of the Spirit" (st. 3).

All tunes published with 'Creator Spirit, by whose aid'^ top

The Book of Common Praise: being the hymn book of The Church of England in Canada (revised 1938) #482 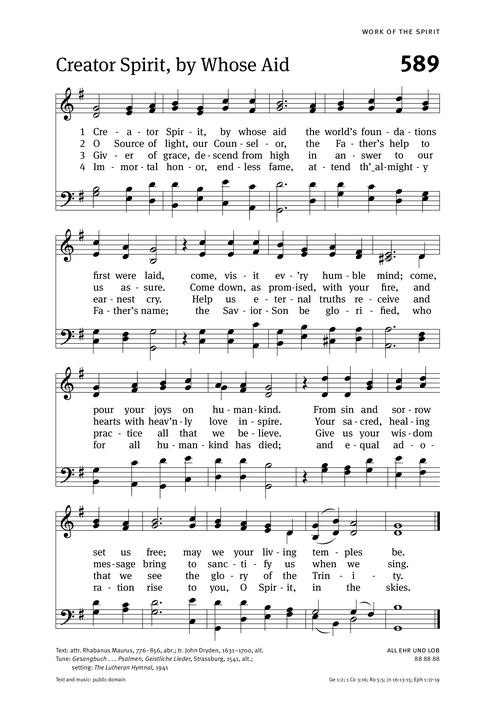