Eat this bread, drink this cup

Audio files: MIDI, Recording
Representative text cannot be shown for this hymn due to copyright.
To see the text, purchase a flexscore.
See page scan previews below.

Robert J. Batastini is the retired vice president and senior editor of GIA Publications, Inc., Chicago. Bob has over fifty-five years of service in pastoral music ministry, having served several parishes in the Archdiocese of Chicago and one in the Diocese of Joliet. He served as executive editor and project director for the Worship hymnals (three editions), Gather hymnals (three editions), Catholic Community Hymnal, and as executive editor of RitualSong. In 1993 he became the first recipient of the Father Lawrence Heimann Citation for lifetime contribution to church music and liturgy in the U.S., awarded by St. Joseph's College, Rensselaer, Indiana, and was named "Pastoral Musician of the Year-2000" by the National Association of Pasto… Go to person page >

The first volume of Music from Taizé included mostly Latin texts; when preparing the second volume, G.I.A. president Robert J. Batastini was interested in providing more English texts as well. Working with Brother Robert and Jacques Berthier of the Taizé Community in France, Batastini adapted "Eat This Bread" from John 6:35 on the morning of October 7, 1983, and Berthier composed the music that same afternoon. The volume they were working on was published in 1984. (See PHH 217 for more information about the Taizé Community and their music.)

Batastini intended the hymn for communion processionals that call for a chorus that is easily memorized and sung while people come forward for the communion bread and wine. The Psalter Hymnal prints only the refrain; five stanzas taken from John 6, to be sung by a soloist, are published in Music from Taizé (vol. 2, 1984). The original text of the refrain portrays Christ as the speaker: "Come to me" and “Trust in me.”

Liturgical Use:
Lord's Supper, during distribution of the bread and wine.

Like JESUS, REMEMBER ME (217), EAT THIS BREAD is a meditative chorus intended to be sung repeatedly and accompanied with various descants; repetitions are more natural when sung as refrains to the solo stanzas. Sing this chorus in harmony without accompaniment, with a song leader indicating dynamics…

All tunes published with 'Eat This Bread'^ top 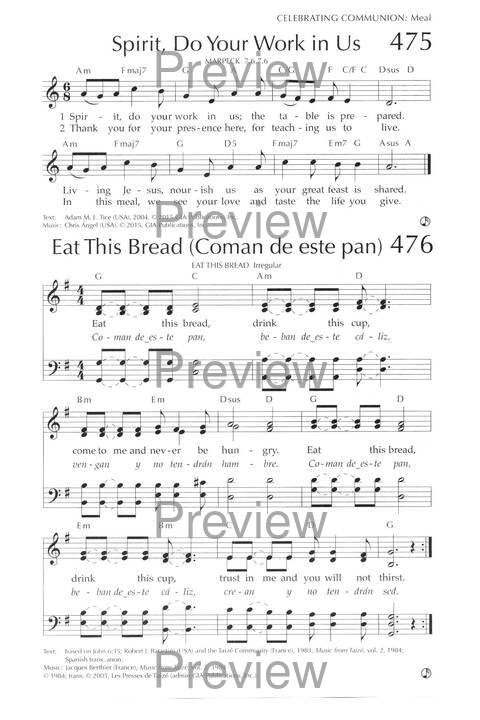