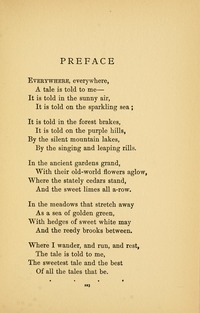 Everywhere, everywhere,
A tale is told to me—
It is told in the sunny air,
It is told on the sparkling sea;


It is told in the forest brakes,
It is told on the purple hills,
By the silent mountain lakes,
By the singing and leaping rills.


In the ancient gardens grand,
With their old-world flowers aglow,
Where the stately cedars stand,
And the sweet limes all a-row.


In the meadows that stretch away
As a sea of golden green,
With hedges of sweet white may
And the reedy brooks between.


The tale is the tale of Jesus—
It is told in Heaven above,
On the sea and the moors and the mountains,
In language of all the peoples,
The speech of love.


The morning star and the dayspring,
The sun and the cloud and the shower,
The grass and the rose and the cedar,
His glory and love are telling
From hour to hour.


The birds in the greenwood singing,
The sea that is deep and wide,
The sheep in the folds of the mountains,
The corn in the golden valleys,
And all beside.


All round me the glorious pictures
Of Him who has made them fair;
Through the long bright day I can see Him,
And I fear not the silent darkness,
For He is there.


Source: Hymns of Ter Steegen and Others (Second Series) #123

Bevan, Emma Frances, née Shuttleworth, daughter of the Rev. Philip Nicholas Shuttleworth, Warden of New Coll., Oxford, afterwards Bishop of Chichester, was born at Oxford, Sept. 25, 1827, and was married to Mr. R. C. L. Bevan, of the Lombard Street banking firm, in 1856. Mrs. Bevan published in 1858 a series of translations from the German as Songs of Eternal Life (Lond., Hamilton, Adams, & Co.), in a volume which, from its unusual size and comparative costliness, has received less attention than it deserves, for the trs. are decidedly above the average in merit. A number have come into common use, but almost always without her name, the best known being those noted under “O Gott, O Geist, O Licht dea Lebens," and "Jedes Herz will etwas… Go to person page >
^ top 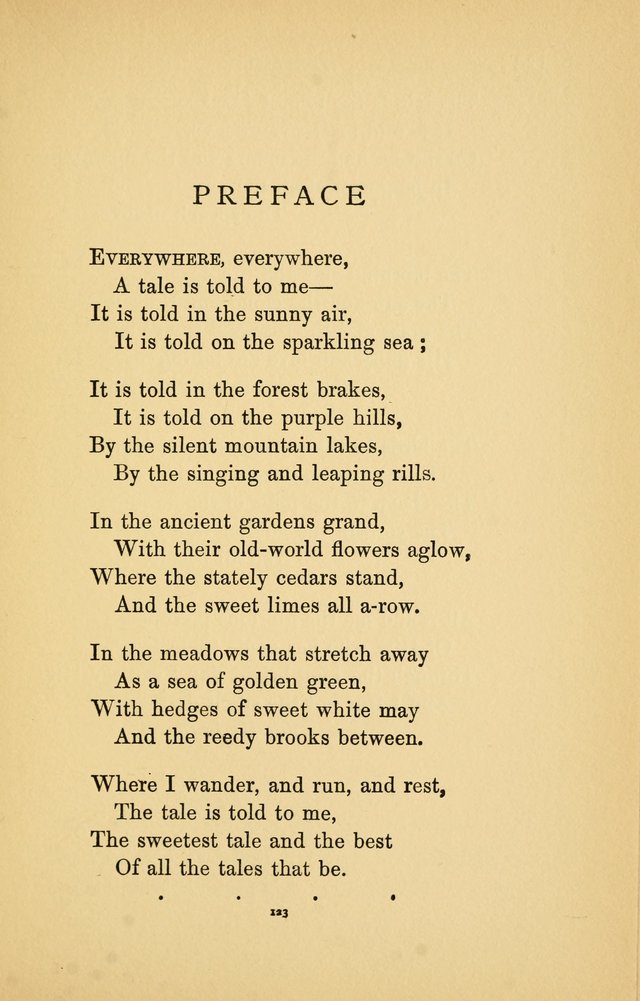 Hymns of Ter Steegen and Others (Second Series) #123