For ever lasts the mercy of the Lord 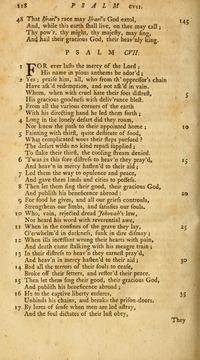 For ever lasts the mercy of the Lord

1 For ever lasts the mercy of the Lord;
His name in pious anthems be ador'd;
2 Yes; praise him, all, who from th' oppressor's chain
Have ask'd redemption, and not ask'd in vain.
Whom, when with cruel hate their foes distrest,
His gracious goodness with deliv'rance blest.
3 From all the various corners of the earth
With his directing hand he led them forth;
4 Long in the lonely desart did they roam,
Nor knew the path to their appointed home;
5 Fainting with thirst, quite destitute of food,
What complicated woes their steps pursued?
The desart wilds no kind repast supplied;
To slake their thirst, the cooling stream denied.
6 'Twas in this sore distress to heav'n they pray'd,
And heav'n in mercy hasten'd to their aid;
7 Led them the way to opulence and peace,
And gave them lands and cities to possess.
8 Then let them sing their good, their gracious God,
And publish his beneficence abroad:
9 For food he gives, and all our griefs controuls,
Strengthens our limbs, and satisfies our souls.
10 Who, vain, rejected dread Jehovah's law,
Nor heard his word with reverential awe,
11 When in the confines of the grave they lay,
O'erwhelm'd in darkness, sunk in dire dismay;
12 When ills incessant wrung their hearts with pain,
And death came stalking with his meagre train;
13 In their distress to heav'n they earnest pray'd,
And heav'n in mercy hasten'd to their aid;
14 Bad all the terrors of their souls to cease,
Broke off their fetters, and restor'd their peace.
15 Then let them sing their good, their gracious God,
And publish his beneficence abroad;
16 He to the captive liberty ensures,
Unbinds his chains, and breaks the prison-doors.
17 By lures of sense when men are led astray,
And the foul dictates of their lust obey,
They feel th' inflictions of his heavy wrath;
Some dire distemper draws them nigh to death:
They relish now their luxuries no more;
And loath the dear-bought cates they priz'd before.
19 But if in their distress to heav'n they pray,
His mercy drives the foul disease away,
20 Heals all their pains, bids new-born vigour rise,
And firms their souls--the dreaded spectre flies,
21 Let such sing then the goodness of their God,
And publish his beneficence abroad;
22 With victims croud his sacred courts, and sing
Glad hymns of praise to their all-clement king.
23 Who plough the surface of the raging main,
And dare the fury of her waves for gain,
24 To them his dread tremendous works appear;
They view his wonders in the deep with fear.
25 At his command the stormy winds arise,
And raise her foamy billows to the skies:
26 High as the heav'ns his waves old ocean rears;
Aloft they mount, and seem to threat the stars;
Then sudden to the depths below subside,
And in the horrible abyss are hid.
27 What terrors then the mariners assail,
What killing fears o'er their sad hearts prevail,
When, like a wretch o'erpower'd with wine, they reel,
And the tost vessel mocks the master's skill?
28 But, if to heav'n in their distress they pray,
He drives their dangers and their fears away,
29 Calls off his winds, and strait allays the storm;
Still are th' obedient waves; the sea grows calm;
30 The mariners rejoice, their terrors o'er,
And the torn bark scuds swiftly to the shore.
31 Let such sing then their good, their gracious God,
And publish his beneficence abroad.
32 Yes; all ye people, all, his pow'r proclaim,
And in the great assemblies hail his name;
33 'Tis he forbids the flood t' enrich the lands,
And turns the living springs to barren sands;
34 'Tis he, when rages wickedness around,
Curses with quick sterility the ground;
35 He too the desart wilds with water fills,
And blesses thirsty soils with fruitful rills;
No more their wonted barrenness they mourn,
But soon look gay with herbage, fruits and corn,
36 These to industrious poverty he gives;
The colony, by him supported, thrives;
Their wives, their infants, strong-built towns defend;
37 Their tilth with joy the painful farmers tend;
They sow the grain, they plant the fruitful vine,
That oon repays their toil with gen'rous wine.
38 Their God looks o'er them with protectful eye,
Hears all their pray'rs, does ev'ry want supply;
With a fair off-spring crowns their chaste embrace,
And gives of cattle the desir'd increase.
39 But, when, elated with their prosp'rous fate,
The mercies of the donor they forget,
They heav'ns beneficence no more engage,
But feel the fury of almighty rage:
40 He gives them up to tyranny a prey,
They soon some proud imperious prince obey;
Their prince and they are equally a scorn
To realms around, and their contempt they mourn;
Stript of their wealth, they roam wild desarts o'er,
Where human feet have never trod before.
41 Yet still the humble and the modest mind
A sure protection in his love shall find;
Secure from ills, by him they're set on high,
Rewarded with a num'rous progeny.
42 This view the righteous, and sincere rejoice,
And to his glory tune the grateful voice;
While impious sinners sullenly repine,
And mock in gloomy silence truth divine.
43 Whoe'er is wise, and on the blest effects
Of heav'n's high justice seriously reflects,
Will know, and own, that mercy, truth and love,
Pertain to him alone, who rules above.


Source: New Version of the Psalms of David #CVII 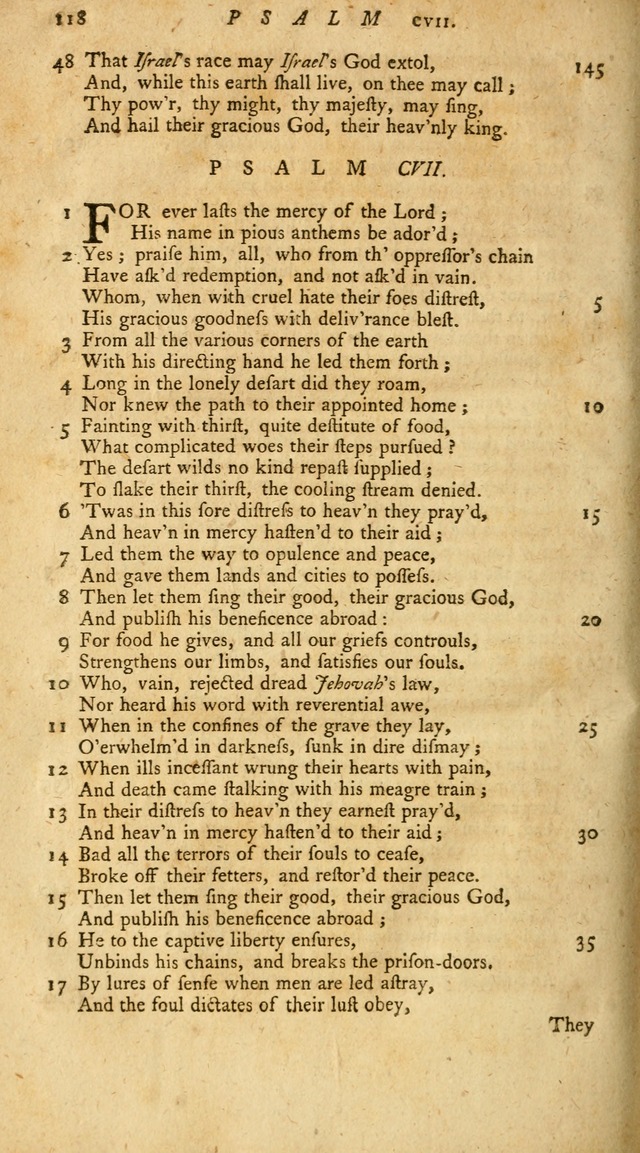 New Version of the Psalms of David #CVII