Forward! be Our Watchword 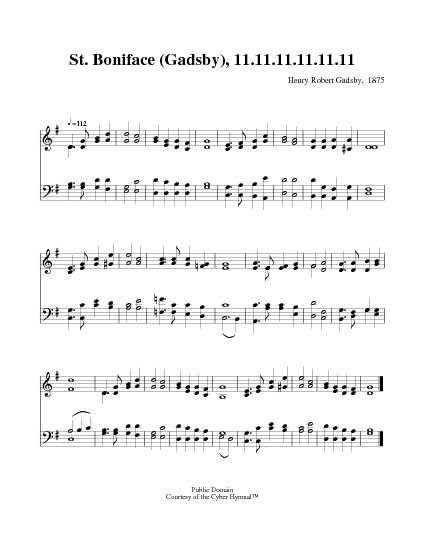 Forward be our watchword, Hearts and voices joined

1 Forward! be our watchword,
Steps and voices joined;
Seek the things before us,
Not a look behind.
Burns the fiery pillar
At our army’s head;
Who shall dream of shrinking,
By our captain led?
Forward through the desert,
Through the toil and fight;
Jordan flows before us,
Zion beams with light.


2 Forward, fleck of Jesus,
Salt of all the earth,
Till each yearning purpose
Springs to glorious birth.
Sick, they ask for healing,
Blind, they grope for day;
Pour upon the nations
Wisdom’s loving ray.
Forward, out of error,
Leave behind the night;
Forward through the darkness,
Forward into light.


3 Glories upon glories
Hath our God prepared,
By the souls that love him
One day to be shared.
Eye hath not beheld them,
Ear hath never heard,
Nor of these hath uttered
Thought or speech a word.
Forward, ever forward,
Where the heaven is bright;
Till the veil be lifted,
Till our faith be sight.


Source: The Song Book of the Salvation Army #682

Forward! be our watchword. H. Alford. [Processional.] Was written for and first sung in public at the tenth Festival of Parochial Choirs of the Canterbury Diocesan Union, on the 6th June, 1871, and published with music, also by the Dean, in the Festival Book of that year. Both words and music were subsequently included in the author's Life by his widow, in 1872 in 8 stanzas of 12 lines. It has since appeared in many hymnals both in Great Britain and America, including The Hymnary, 1872; Hymns Ancient & Modern, 1875, Thring's Collection, 1882, .&c. In the American Laudes Domini, N. Y., 1884, it is divided into two parts, the second beginning, "Far o'er yon horizon."

"On Whitsun Tuesday, June 14th [1870], the tenth [? ninth] Festival of the Parochial Choirs of the Canterbury Diocesan Choral Union was celebrated by a service in the Cathedral, performed by 900 voices. . . . After it was over he made arrangements with the Society for the performance at their next Festival (Whitsun Tuesday, 1871) of a Processional Hymn, for which he furnished the words and music. It was his last composition of this kind."

The Dean composed a hymn at Mr. Wood's request. On receiving it he pointed out to the Dean " that the hymn, while excellent in its way, was not at all adapted to be sung upon the march. Would he kindly go into the Cathedral, walk slowly along the course which the procession would take, and compose another hymn as he did so." This the Dean did, and "Forward! be our watchword" was the result. The Dean also supplied the treble and bass, and Miss Lindsay (Mrs. J. Worthington Bliss) the alto and tenor of the tune which was sung at the Festival.

All tunes published with 'Forward! be Our Watchword'^ top 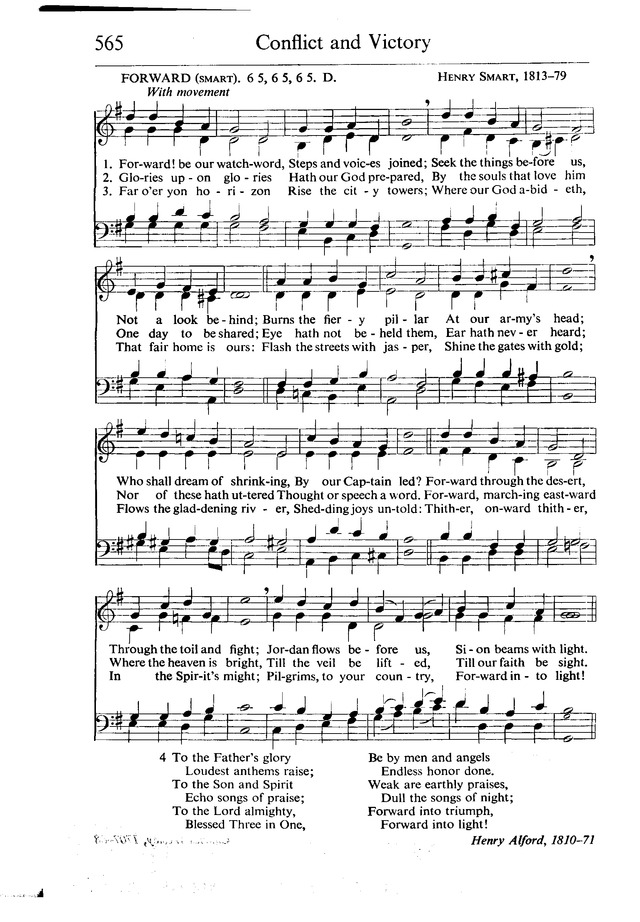 The Song Book of the Salvation Army #682