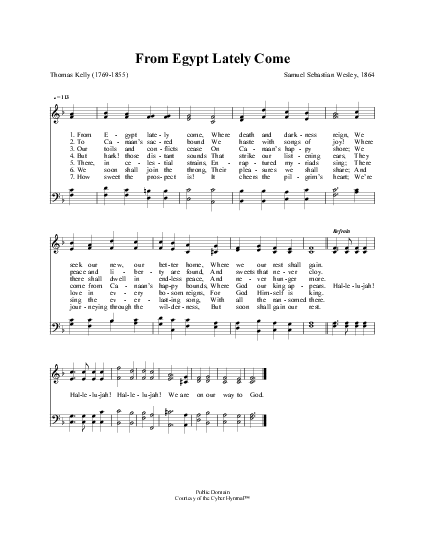 1 From Egypt lately come,
Where death and darkness reign,
We seek our new, our better Home,
Where we our rest shall gain.
Alleluia!
We are on our way to God!


2 To Canaan's sacred bound
We hast with songs of joy,
Where peace and liberty are found,
And sweets that never cloy.
Alleluia!
We are on our way to God!


3 There sin and sorrow cease,
And every conflict's o'er;
There we shall dwell in endless peace,
And never hunger more.
Alleluia!
We are on our way to God!


4 There, in celestrial strains,
Enraptured myriads sing;
There love in every bosom reigns,
For God Himself is King.
Alleluia!
We are on our way to God!


5 We soon shall join the throng,
Their pleasures we shall share,
And sing the everlasting song,
With all the ransomed there.
Alleluia!
We are on our way to God!


6 How sweet the prospect is!
It cheers the pilgrim's breast!
We're journeying through the wilderness,
But soon shall gain our rest!
Alleluia!
We are on our way to God!


Source: The Evangelical Hymnal with Tunes #392

From Egypt lately come. T. Kelly. [Seeking a Better Country.] First published in his Collection of Psalms & Hymns extracted from Various Authors, with an Appendix, 1802, No. 250, in 7 stanzas of 6 lines. It was repeated in the numerous editions of his Hymns on Various Passages of Scripture, &c, from the first, 1804, to the latest, 1853. It is rarely given in its original and full form. The version, "From Egypt's bondage come," appeared in Cotterill’s Selection, 8th edition, 1819, and was repeated in Montgomery's Christian Psalmist, 1825. It came into general use, and is a popular form of the hymn. Other altered texts are in Bickersteth's Christian Psalmody, 1833; Hall's Mitre, 1836; the Society for Promoting Christian Knolwedge Church Hymns, 1871, &c. These begin with the same first line as in Cotterill, but differ somewhat in the body of the text. The same differences are repeated in the American collections, but most of these are in error as to date. In a few hymn-books the hymn opens with stanza ii., "To Canaan's sacred bound," as in the Marylebone Psalms & Hymns, 1851.

Although this tune is widely attributed to Isaac Smith and was published in Smiths Collection of Psalm Tunes, London, ca. 1780, Smith does not claim to be the composer. The tune also appeared in other books of similar or earlier date. Southern Harmony, 1835 attributes the tune to J. Street. - From T…

All tunes published with 'From Egypt lately come'^ top 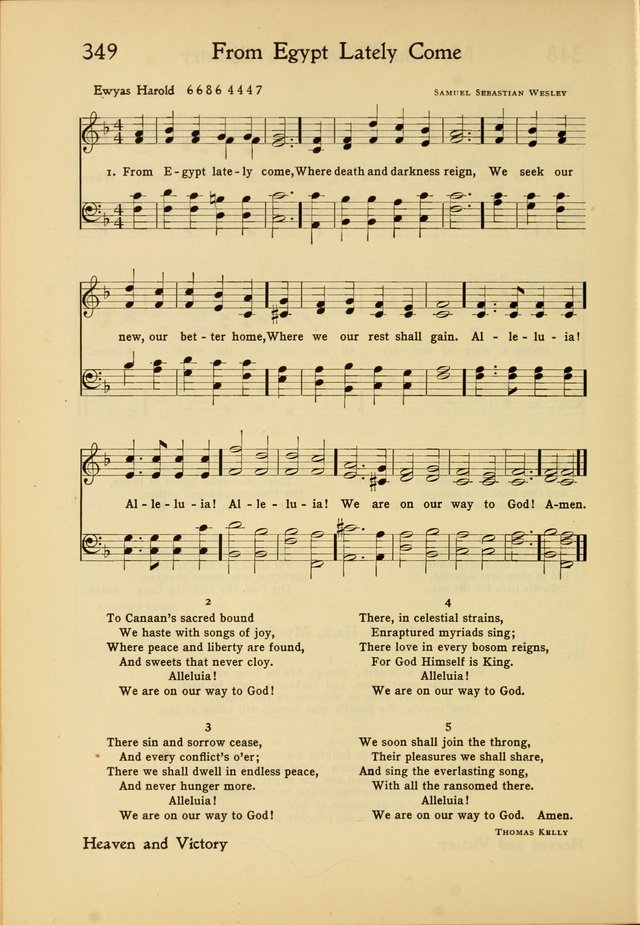