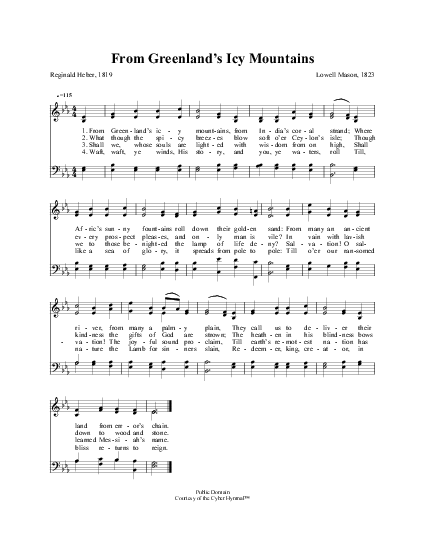 1 From Greenland's icy mountains,
From India's coral strand,
Where Afric's sunny fountains
Roll down their golden sand,
From many an ancient river,
From many a palmy plain,
They call us to deliver
Their land from error's chain.


2 What though the spicy breezes
Blow soft o'er Ceylon's isle;
Though every prospect pleases,
And only man is vile?
In vain with lavish kindness
The gifts of God are strown;
The heathen in his blindness
Bows down to wood and stone.


3 Shall we, whose souls are lighted
With wisdom from on high,
Shall we to men benighted
The lamp of life deny?
Salvation! O salvation!
The joyful sound proclaim,
Till earth's remotest nation
Has learned Messiah's name.


4 Waft, waft, ye winds, His story,
And you, ye waters, roll,
Till, like a sea of glory,
It spreads from pole to pole:
Till o'er our ransomed nature
The Lamb for sinners slain,
Redeemer, King, Creator,
In bliss returns to reign.

Source: Worship and Service Hymnal: For Church, School, and Home #431

From Greenland's icy mountains. Bishop R. Heber. Mrs. Heber's account of the origin of this hymn for Missions is that,

"In the course of this year [1819] a royal letter was granted authorizing collections in every Church and Chapel of England in furtherance of the Eastern operations of the Society for Propagating the Gospel. Mr. Reginald Heber went to Wrexham to hear the Dean of S. Asaph [his father-in-law] preach on the day appointed, and at his request, he wrote the hymn commencing ‘From Greenland's icy mountains,' which was first sung in that beautiful Church." (Memoirs, vol. i. p. 519.)

The original manuscript was subsequently secured from the printer's file by Dr. Raffles, of Liverpool, and has been reproduced in facsimile by Hughes of Wrexham. On a flyleaf of the facsimile is an interesting account of its origin, by the late Thomas Edgworth, solicitor, Wrexham. Mr. Edgworth's account agrees with that given by Mrs. Heber in the Memoirs, but is more circumstantial:—

On Whitsunday, 1819, the late Dr. Shipley, Dean of St. Asaph, and Vicar of Wrexham, preached a Sermon in Wrexham Church in aid of the Society for the Propagation of the Gospel in Foreign Parts. That day was also fixed upon for the commencement of the Sunday Evening Lectures intended to be established in the Church, and the late Bishop of Calcutta (Heber), then rector of Hodnet, the Dean's son-in-law, undertook to deliver the first lecture. In the course of the Saturday previous, the Dean and his son-in-law being together in the Vicarage, the former requested Heber to write 'something for them to sing in the morning;' and he retired for that purpose from the table where the Dean and a few friends were sitting, to a distant part of the room. In a short time the Dean enquired, ‘What have you written?' Heber having then composed the three first verses, read them over. ‘There, there, that will do very well,' said the Dean. ‘No, no, the sense is not complete,' replied Heber. Accordingly he added the fourth verse, and the Dean being inexorable to his repeated request of 'Let me add another, 0 let me add another,' thus completed the hymn of which the annexed is a facsimile, and which has since become so celebrated. It was sung the next morning in Wrexham Church, the first time. E."

The text of the facsimile shows that Heber originally wrote stanza ii. line 7, "The savage in his blindness," but altered it in the manuscript to "The heathen in his blindness." In the manuscript, stanza ii., line 2, reads, "Blow soft o'er Ceylon's isle." This is altered in the Hymns, 1827, to "Blow soft o'er Java’s isle," but for what reason is unknown.
During the latter part of 1822 Heber was offered the Bishopric of Calcutta. Early in the following year a correspondent, signing himself "J.," forwarded the hymn to the editor of the Christian Observer, with a note in which, after referring to Heber's recent appointment to the Bishopric, and to the beauty of his muse, he adds, "the hymn having appeared some time since in print with the name of Reginald Heber annexed, I can feel no scruple in annexing the name to it on the present occasion." This note, followed by the hymn, was published in that magazine in February, 1823, and Heber was consecrated in the June following. In 1827 it was republished by his widow in Hymns written and adapted to the Weekly Church Service, p. 139, entitled,"Before a Collection made for the Society for the Propagation of the Gospel," and signed "R. H.," in common with the rest of Heber's hymns. It was subsequently reprinted in Heber's Works, in 1842. Its use is very extensive in all English-speaking countries; and it has been rendered into various languages, including Latin, in Arundines Cami, p. 225; and German by Dr. C. G. Barth, in his Christliche Gedichte, Stuttgart, 1836, p. 65, and repeated in Biggs's Annotated Hymns Ancient & Modern, 1867.

From Greenland's icy mountains, p. 399, i. In the Evangelical Magazine, July, 1821, p. 316, this hymn is given, the text being the same as in the original MS. It is headed "Hymn Composed for a Missionary Meeting. By the Rev. Reginald Heber." This is the earliest printed text we have seen. In the same Magazine, March, 1823, p. 132, the same text is repeated, with the following Preface:—

"A hymn said to be composed by the Rev. Reginald Heber (the newly appointed Bishop of Calcutta) for the purpose of being sung in Whittington Church, Shropshire, in which parish a Missionary Association was formed on Sunday, April 16, 1820."

The Editor was evidently unaware that the hymn was written for and sung in Wrexham Parish Church in 1819, and that he had printed it in his Magazine in July, 1821.

All tunes published with 'From Greenland's Icy Mountain'^ top 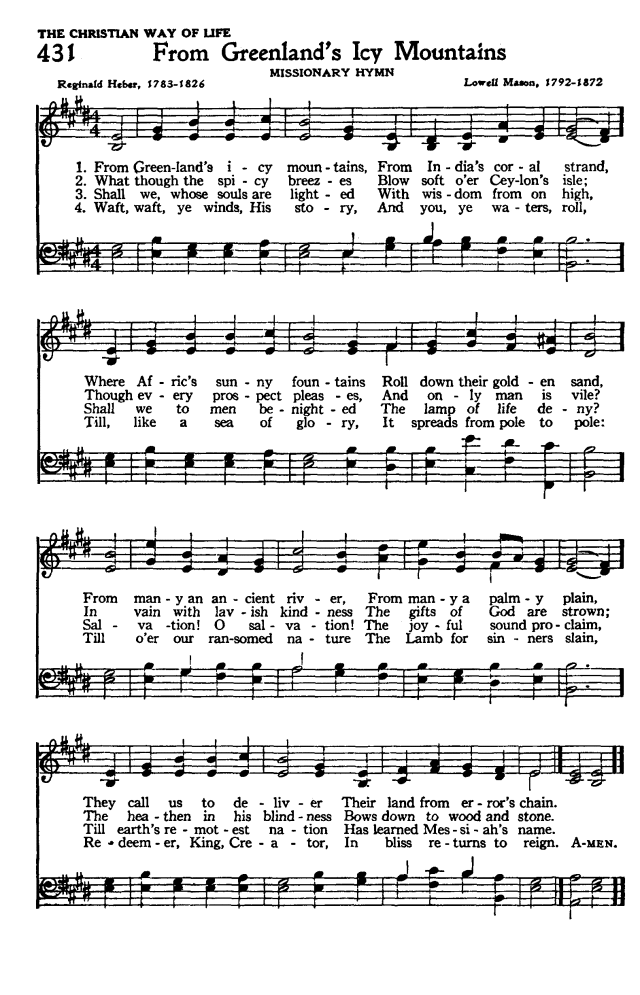 Hymns of the Christian Life #452