From Ocean unto Ocean 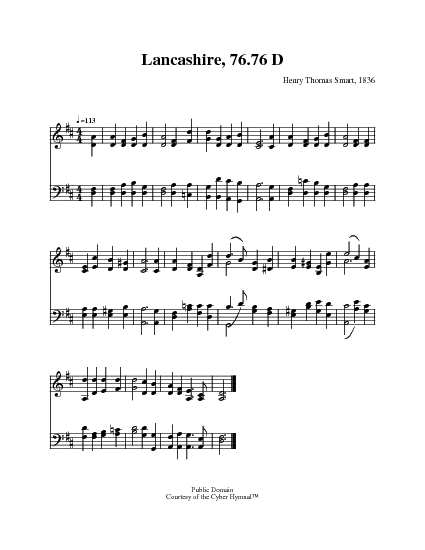 From ocean unto ocean, Our land shall own you, Lord

1 From ocean unto ocean
our land shall name you, Lord
and, filled with true devotion,
obey your sovereign Word.
Our prairies and our mountains,
the forest, fertile field,
our rivers, lakes, and fountains
to you shall tribute yield.


2 O Christ, for your own glory
and for our country's weal;
we humbly plead before you:
yourself in us reveal.
And may we know, Lord Jesus,
the touch of your dear hand,
and, healed of our diseases,
the tempter's power withstand.


3 Where error smites with blindness,
enslaves, and leads astray,
proclaim in loving-kindness
your joyful gospel day,
till all the tribes and races
that dwell in this fair land,
adorned with Christian graces,
within your courts shall stand.


4 Our Savior King, defend us
and guide where we should go;
forth with your message send us,
your love and light to show,
till, fired with true devotion
and kindled by your Word,
from ocean unto ocean
our land shall name you Lord.

Murray, Robert, Minister of the Presbyterian Church in Canada, born Dec. 25, 1832, is the author of "From ocean unto ocean" (National Hymn), and "Lord, Thou lov'st the cheerful giver" (Almsgiving), in the Scotch Church Hymnary, 1898. [Rev. James Bonar M.A.] --John Julian, Dictionary of Hymnology, New Supplement (1907)… Go to person page >
^ top

Robert Murray (b. Earltown, Colchester County, Nova Scotia, Canada, 1832; d. Halifax, Nova Scotia, 1910), editor of The Presbyterian Witness and an outstanding preacher, wrote this text. It was published with three other hymn texts, all identified with just the initial "M," in the first Canadian Presbyterian Hymnal of 1880.

Murray's text originally made reference to Canada's geography, but its opening lines, "From ocean unto ocean," recall the words of Psalm 72:8: "He will rule from sea to sea." Although many patriotic hymns express national pride, this text clearly affirms the sovereignty and healing power of God in human and national affairs and humbly admits human sin and folly. Stanza 1 confesses that the earth's natural resources will yield their bounty in praise to God (see Ps. 72: 16), and stanzas 3 and 4 profess submission to the claims of Christ. This hymn helps us to say and sing that our service to God has an impact on our daily lives, on our stewardship of resources, on our living together in community, and on our hope for and experience of reconciliation in the market¬place and in political life.

Murray began writing poetry at the age of ten. Educated at the Free Church College of Halifax, he was licensed to preach in the Presbyterian Church of Canada. His life's vocation, however, was not in pastoral ministry. Instead he served as editor of The Presbyterian Witness for more than fifty years. A member of numerous denominational committees, Murray favored Canadian confederation and the temperance movement in his editorials. A number of his hymns were first published in The Hymnal (1880) of the Presbyterian Church in Canada and its successor, The Book of Praise (1918).

Liturgical Use:
Worship that focuses on stewardship of natural resources (including harvest thanksgiving) and on justice and charity in public life; patriotic occasions and other times of prayer for national life.

All tunes published with 'From Ocean unto Ocean'^ top 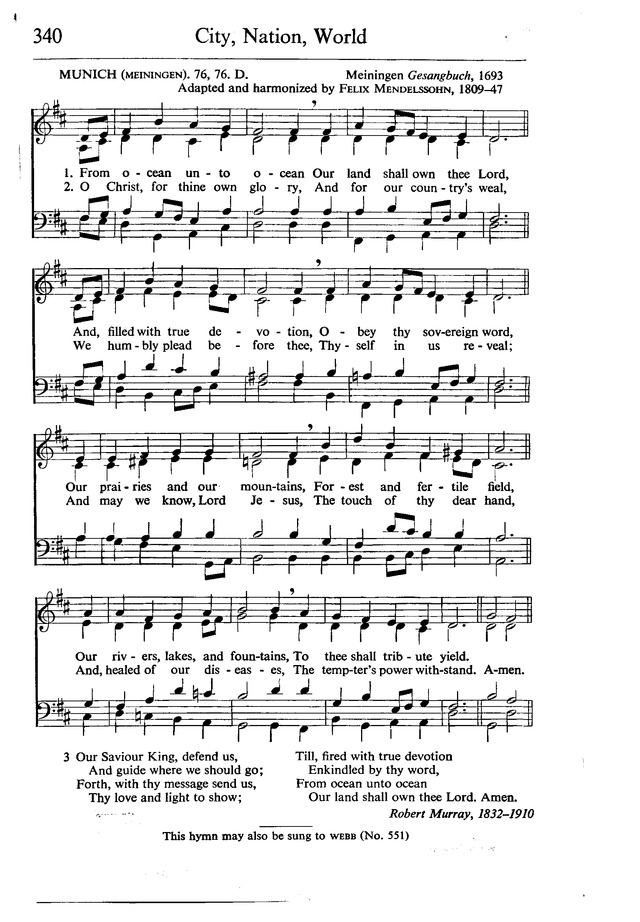