Henry Smart (b. Marylebone, London, England, 1813; d. Hampstead, London, 1879), a capable composer of church music who wrote some very fine hymn tunes (REGENT SQUARE, 354, is the best-known). Smart gave up a career in the legal profession for one in music. Although largely self taught, he became proficient in organ playing and composition, and he was a music teacher and critic. Organist in a number of London churches, including St. Luke's, Old Street (1844-1864), and St. Pancras (1864-1869), Smart was famous for his extemporiza­tions and for his accompaniment of congregational singing. He became completely blind at the age of fifty-two, but his remarkable memory enabled him to continue playing the organ. Fascinated by organs as a youth… Go to person page >
^ top

Lead on, O King eternal,
the day of march has come;
henceforth in fields of conquest
your tents will be our home.
Through days of preparation
your grace has made us strong;
and now, O King eternal,
we lift our battle song.

The Day of Resurrection

The day of resurrection!
Earth, tell it out abroad;
the passover of gladness,
the passover of God.
From death to life eternal,
from earth unto the sky,
our Christ hath brought us over,
with hymns of victory.

All texts published with LANCASHIRE^ top

Henry T. Smart (PHH 233) composed the tune in 1835 for use at a missions festival at Blackburn, Lancashire, England. For that festival, which celebrated the three-hundredth anniversary of the Reformation in England, the tune was set to Reginald Heber's (PHH 249) “From Greenland's Icy Mountains.” First printed in leaflets, LANCASHIRE was published In Smart's Psalms and Hymns for Divine Worship (1867). It was set to Shurtleffs text in the 1905 Methodist Hymnal. In some hymnals this tune is associated with "The Day of Resurrection" (390). Initially cast over a static bass, LANCASHIRE becomes quite animated in its third phrase. Sing and accompany with much energy and rhythmic vitality. --Psalter Hymnal Handbook, 1988
^ top

Text: All Hail, Thou Resurrection!

Text: An Endless Line of Splendor

Text: From Ocean unto Ocean

Text: How Many Are Your Works, Lord

Text: When War On Earth Suspended

Text: Our Father, God, and Savior

Text: The Day of Resurrection! 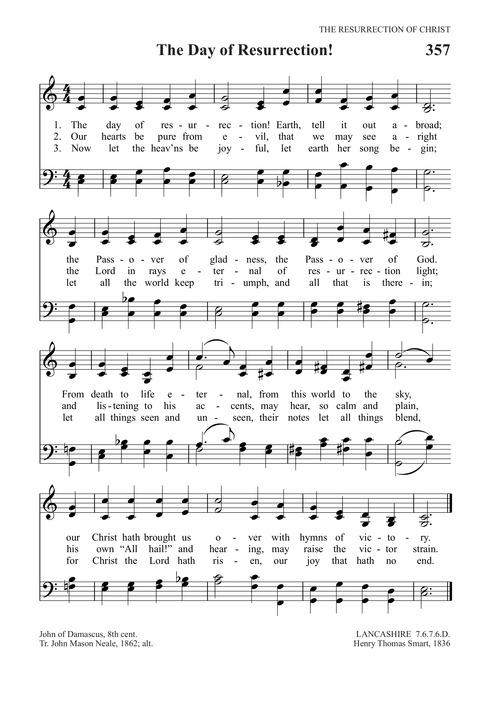 Hymns for a Pilgrim People #197

Hymns for a Pilgrim People #451

Hymns for the Spiritual Journey #5

Lift Every Voice and Sing II #48

The Hymnal for Worship and Celebration #226

The Hymnal for Worship and Celebration #483

Include 212 pre-1979 instances
All instances^ top
Suggestions or corrections? Contact us