Give Glory to God, All You Heavenly Creatures 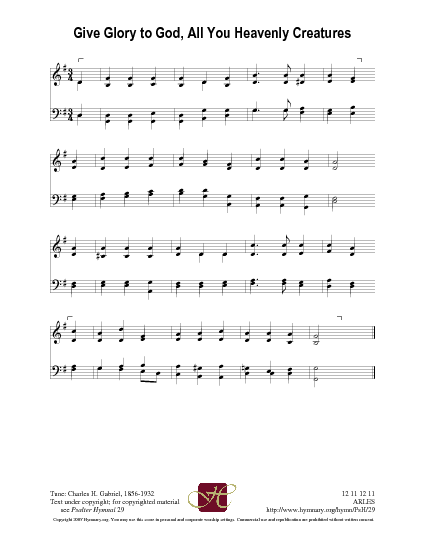 Give glory to God, all you heavenly creatures

A call to praise the Creator, whose majesty and might as displayed in the thunderstorm is the source of the people's security and welfare.

Psalm 29 attributes to the God of Israel what the Canaanites attributed to Baal–the divine majesty and power seen in the awesome sights and sounds and force of a thunderstorm. After the opening call to the great powers of creation to glorify the LORD (st. I), the main body of the psalm (st. 2-4) evokes the experience of thunderstorms in northern Canaan as they form over the Mediterranean ("the waters"), sweep across the Lebanon ranges, and spend themselves over the desert-like steppe to the east. Appropriately "the voice of the LORD," that is, thunder (in Baal mythology, the voice of Baal), sounds seven times in this psalm (vv. 3-9). Such displays of divine might may cause Baal worshipers to tremble, but true believers praise their God exuberantly, knowing that the LORD of the thunderstorm gives strength to his people and blesses them with peace (st. 5). Calvin Seerveld (PHH 22) versified this psalm in 1983 for the Psalter Hymnal.

Liturgical Use:
Whenever the people of God want to express their praise to the Lord as the One who sits enthroned in the heavens, rules over all creation as King forever, and blesses and sustains his people.

ARLES was composed by Charles H. Gabriel (PHH 24), a prolific composer of gospel hymn tunes; it was associated with this psalm in the 1912 Psalter. Named after the French city, ARLES bears energetic, rhythmically precise accompaniment and four-part singing. For variety and contrast, sing the stanzas…

All tunes published with 'Give Glory to God, All You Heavenly Creatures'^ top

Psalms for All Seasons #29C