All people that on earth do dwell

1 All people that on earth do dwell,
sing to the LORD with cheerful voice.
Serve him with joy, his praises tell,
come now before him and rejoice!


2 Know that the LORD is God indeed;
he formed us all without our aid.
We are the flock he surely feeds,
the sheep who by his hand were made.


3 O enter then his gates with joy,
within his courts his praise proclaim!
Let thankful songs your tongues employ.
O bless and magnify his name!


4 Because the LORD our God is good,
his mercy is forever sure.
His faithfulness at all times stood
and shall from age to age endure.

William Kethe (b. Scotland [?], d. Dorset England, c. 1594). Although both the time and place of Kethe's birth and death are unknown, scholars think he was a Scotsman. A Protestant, he fled to the continent during Queen Mary's persecution in the late 1550s. He lived in Geneva for some time but traveled to Basel and Strasbourg to maintain contact with other English refugees. Kethe is thought to be one of the scholars who translated and published the English-language Geneva Bible (1560), a version favored over the King James Bible by the Pilgrim fathers. The twenty-five psalm versifications Kethe prepared for the Anglo-Genevan Psalter of 1561 were also adopted into the Scottish Psalter of 1565. His versification of Psalm 100 (All People that… Go to person page >
^ top

A call to praise the LORD for showing grace and faithfulness toward "the sheep of his pasture" (v.3).

Psalm 100 brings to a close a collection of psalms that celebrate the LORD's righteous rule over all creation (93, 95-99). Like the others, it was composed to be sung by the Levites at a high religious festival that annually celebrated the LORD's kingship over the entire world (perhaps the Feast of Tabernacles). Psalm 100 is the Hebrew equivalent of a cheerleader's shout–a strong call to worship the LORD with joyful song (st. 1, 3): the LORD is the one true God who made us to be "the sheep of his pasture" (st. 2), and God's love and faithfulness never fail (st. 4).

The Psalter Hymnal includes both an English and a French versification. The English text by William Kethe (b. Scotland [?], date unknown; d. Dorset, England, c. 1594) is the oldest metrical psalm text in the Psalter Hymnal It first appeared in the Anglo-Genevan Psalter of l561 and in John Day's Psalmes of David in English Metre (PHH 69), also of 1561. Since then it has been published in virtually all English-language psalters and hymnals. The French text (opposite 101 in the Psalter Hymnal) is taken from the French hymnal Psaumes et Cantiques (1891); it is included as a tribute to the original language of the Calvinist Psalter.

Both the time and place of Kethe's birth and death are unknown, although scholars think he was a Scotsman. A Protestant, he fled to the continent during Queen Mary's persecution in the late 1550s. He lived in Geneva for some time but traveled to Basel and Strasbourg to maintain contact with other English refugees. Kethe is thought to be one of the scholars who translated and published the English-language Geneva Bible (1560), a version favored over the King James Bible by the Pilgrim fathers. The twenty-five psalm versifications Kethe prepared for the Anglo-Genevan Psalter of 1561 were also adopted into the Scottish Psalter of 1565. His versification of Psalm 100 is the only one that found its way into modern psalmody.

Liturgical Use:
Many uses beyond its traditional role at the beginning of worship.

--Psalter Hymnal Handbook
===========================
All people that on earth do dwell. [Ps. c.] The memories which have gathered round this rendering of the 100th Psalm, together with the uncertainty of its authorship, require us to trace its history, to note its true text, and to determine, if possible, its author,
I.History.—It appeared for the first time in the Psalter, published in London by John Daye, in 1560-1, and in the Anglo-Genevan Psalter, printed at Geneva, in 1561. In the full English Psalter of 1562 it is not found, but in an Appendix to the edition of 1564 (British Museum) it is given, and again in the body of the work in 1565 (Brit. Mus.). It was also included in the Scottish Psalter of 1564. From 1564 it reappeared in all editions of the English and Scottish Psalters, and is also found in most hymnbooks published during the past 150 years.
II. Text.—The original text from the only copy of Daye's Psalter, 1560-1, known, and in which it is printed in the old black-letter text of the period, is as follows:—

"Psalme C.
Al people yt on earth do dwel,
sing to yc lord, with chereful voice
Him serve wt fear, his praise forth tel,
come ye before him and reioyce.

The Lord ye know is God in dede,
with out our aide, he did us make:
We are his folck, he doth us fede,
and for his Shepe, he doth us take.

Oh enter then his gates with prayse
approche with ioye, his courtes unto:
Praise, laude, and blesse his name alwayes,
for it is semely so to doe.

In what form this text reached Geneva, whether in manuscript or in a copy of Daye's edition, cannot be determined.
III. Authorship.—This is somewhat difficult to determine. The evidence is this:—
1. Daye's Psalter, 1560-1. No signature.
2. Anglo-Genevan Psalter, 1561. "Tho. Ster."
3. Britwell Psalter, 1561. "W. Ke."
4. Scottish Psalter, 1564. " W. Ke."
5. Daye's Appendix, 1564. No signature.
6. Daye's Psalter, 1565. No signature.
7. Daye's Psalter, 1566. No signature.
8. Crespin's Psalter (Geneva), 1561). No signature.
9. Daye's Psalter, 1579. No signature.
10. Daye's Psalter, 1587. "J. H."
These are all the Psalters known which have any value in determining the question. This evidence is certainly in favour of W. Kethe, and this is the more conclusive when we remember that the Britwell Psalter, 1561, and the Scottish Psalter of 1564, are reprints of the Anglo-Genevan Psalter, with
such corrections in spelling as an English work printed on the Continent would call for, and constitute together a distinct family from the Daye Psalters. The metre is also in Kethe's favour, and decisive against both Sternhold and Hopkins. Its correct subscription is therefore "W. Kethe, 1560-1."
Although the history of tunes forms no part of our work, a few facts concerning "The Old Hundredth " may not be unacceptable. It first appeared in the enlarged edition of the French Genevan Psalter, published in 1551, as the tune to Ps. cxxxiv. The first half of the tune is a musical phrase which is found in various combinations both before and after that time; but the latter part of the tune, and the form of the whole of it, is the work of Louis Bourgeois, who, and not Guillaume Franc, is now known to be the editor of this edition of the French Genevan Psalter. Kethe's version of Ps. c. was doubtless written for this tune.

The psalmist gave Psalm 100 the title, “A psalm of thanksgiving.” The opening verses tell us how this thanksgiving is to be rendered: boldly and jubilantly. “Make a joyful noise to the Lord, all the earth! … Come into his presence with singing!” (Psalm 100:1,2 ESV) The final stanza of this hymn, which is a paraphrase of Psalm 100, tells us why God deserves such unabashed worship: “His truth at all times firmly stood, And shall from age to age endure.” Sing this psalm with your whole being, for our good God deserves nothing less than whole-hearted praise.

This hymn is attributed to William Kethe, of whom very little is known other than that he lived in the sixteenth century and was exiled to the European continent during the reign of Queen Mary in England (1553-1558). Kethe likely remained in exile after Queen Mary's death. He is credited with twenty-five psalm paraphrases for English-language psalters in the late 1550s, but this text is the only one still in use today. Since it was written, “All People That on Earth Do Dwell” has appeared in over a thousand editions of English-language psalters and hymnals (Nicholas Temperley, Hymnal 1982 Companion, p. 699), and “no comprehensive modern English-language hymnal can do without it.” (Temperley, p. 697)

“All People That on Earth Do Dwell” is a metrical paraphrase of Psalm 100. There are four stanzas to the hymn, but many hymnals add a doxology after the fourth stanza. Many hymnals have updated Kethe's frequently quaint syntax, especially in the third stanza. Psalm 100 has four groups of three poetic lines (the first of which is numbered as two verses); the stanzas of this hymn correspond to these groups.

This psalm is sung almost exclusively to the well-known tune OLD HUNDREDTH, which is sometimes called SAVOY or GENEVAN 134, after its original text in the Genevan Psalter. In fact, this association gave the tune its common title. It is “one of the noblest and most loved tunes in all of Christendom.” (Psalter Hymnal Handbook, ed. Emily R. Brink & Bert Polman, p. 270) This Genevan psalm tune is often attributed to Louis Bourgeois, who edited the original Genevan Psalter. Most hymnals contain this tune, paired with “All People That on Earth Do Dwell,” or “Praise God From Whom All Blessings Flow,” or both.

There are two versions of the tune with respect to rhythm. Usually, when the tune is used with this text, the original rhythm is maintained. However, congregations may be tempted to sing the altered, isorhythmic version, because that is often the version sung with the Doxology, “Praise God From Whom All Blessings Flow.”

This hymn can be used as an opening hymn, or any place where a song of joyful praise is needed. Many composers and arrangers have written settings for this tune, from the four-part harmonizations of Claude Goudimel and John Dowland in the sixteenth and seventeenth centuries, to the grand coronation anthem by Ralph Vaughan Williams in 1953, to the numerous organ settings available today for service music and congregational accompaniment. “Praise God!”is a jubilant arrangement for organ and handbells by Fred Bock that would work well as a prelude. David Friddle has written two organ settings of the tune in his collection “Sunday Finest”. “Three Hymn Embellishments” by Robert A. Hobby includes an arrangement of this hymn for organ accompaniment of congregational singing.

The Whole Booke of Psalmes: collected into English meeter #56a 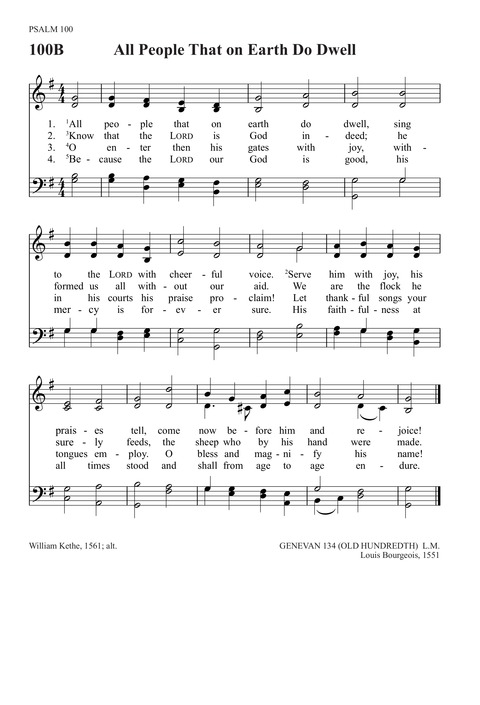 A New Hymnal for Colleges and Schools #1

A New Hymnal for Colleges and Schools #2

Hymns for a Pilgrim People #8

Hymns of Glory, Songs of Praise #63a

Hymns of Glory, Songs of Praise #63b

Hymns to the Living God #17

Lift Up Your Hearts #1

Praise! Our Songs and Hymns #27

Psalms for All Seasons #100A

Psalms for All Seasons #100B

The Book of Hymns #7

The Hymnal for Worship and Celebration #20

The New English Hymnal #334a

The New English Hymnal #334b

The Song Book of the Salvation Army #3

Include 531 pre-1979 instances
All instances^ top
Suggestions or corrections? Contact us