God did to father Abraham say 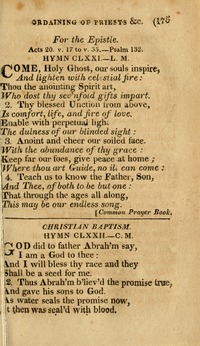 God did to father Abraham say

1 God did to father Abrah'm say,
I am a God to thee:
And I will bless thy race and they
Shall be a seed for me.


2 Thus Abrah'm b'liev'd the promise true,
And gave his sons to God.
As water seals the promise now,
It then was seal'd with blood.


3 That covenant which God had made,
With Abrah'm and his seed;
To those who his commands obey'd,
He was their God indeed.


4 His offsprings then were circumcis'd,
Tho' none, but just the male:
But male and female are baptiz'd;
Baptism is the seal.


5 To all the nations as they are:
The heathens and the Jews,
May claim an equal right and share,
As the Apostle shews.


7 Then as the water is appli'd,
And God his gifts impart;
The creature then is sanctifi'd,
And circumcis'd at heart.


Source: Church Hymn Book: consisting of newly composed hymns with the addition of hymns and psalms, from other authors, carefully adapted for the use of public worship, and many other occasions (1st ed.) #CLXXII

Church Hymn Book; consisting of hymns and psalms, original and selected. adapted to public worship and many other occasions. 2nd ed. #471