1 God of the prophets! Bless the prophets' sons;
Elijah's mantle o'er Elisha cast;
each age its solemn task may claim but once;
make each one nobler, stronger than the last.


2 Anoint them prophets! Make their ears attent
to thy divinest speech, their hearts awake
to human need; their lips make eloquent
to gird the right and ev'ry evil break.


3 Anoint them priests! Strong intercessors, Lord!
Anoint them with the Spirit of thy Son;
theirs not a jeweled crown, a blood-stained sword;
theirs, by sweet love, for Christ a kingdom won.


4 Make them apostles! Heralds of thy cross.
Forth may they go to tell all realms thy grace;
inspired of thee, may they count all but loss,
and stand at last with joy before thy face.

Denis Wortman (b. Hopewell, NY, 1835; d. East Orange, NJ, 1922) wrote the poem "God of the Prophets! Bless the Prophets' Sons" in 1884 for the one-hundredth anniversary of New Brunswick Theological Seminary, from which he had graduated in 1860. Wortman entitled his poem "Prayer for Young Ministers" and sent it with the following note to the seminary:

May I take the liberty of sending you the enclosed verses; a very humble attempt
to express the prayer that our Class of 1860, and indeed all loyal sons of New Brunswick Seminary, lift to God at this unusual anniversary, for his blessing upon her and all who go forth from her instructions.

Also educated at Amherst College, Wortman served a number of Reformed Church in America congregations, mainly in New York State. He was the denomination's secretary of ministerial relief from 1901 to 1922 and served as president of General synod in 190 I. His publications include Reliques of Christ (1888), The Divine Processional (1903), and this one hymn text.

All the stanzas were originally cast in third person ("Anoint them") since the hymn was written for clergymen; the revised text in first person ("Anoint us") now includes all God's people as ministers or servants. The text refers to various biblical offices to depict Christian ministries: prophets, priests, kings (all Old Testament offices), and apostles (the only New Testament office mentioned in this text).

Liturgical Use:
Renewal services; for commissioning the entire congregation at the beginning of a church season; for an ordination service one or several of the middle stanzas could be sung in the older form–“Anoint them prophets…” 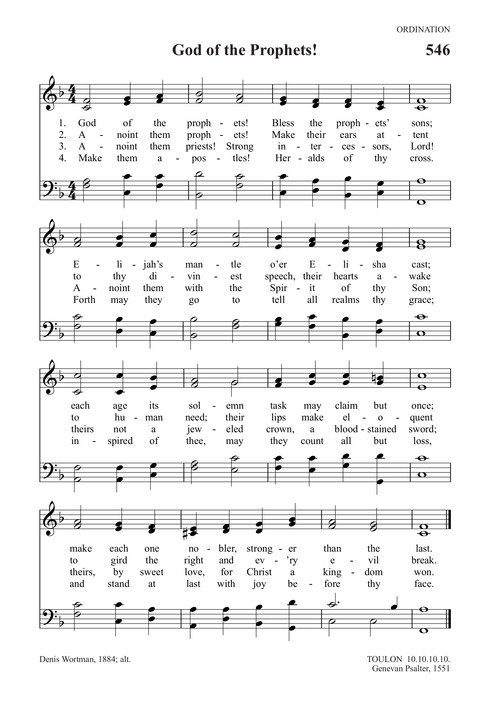