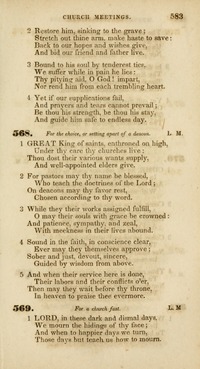 Great King of Saints, enthroned on high. [On behalf of Church Officers.] This hymn was given anonymously in W. Urwick's Collection of Hymns, &c, Dublin, 1829, No. 292, in 5 stanzas of 4 lines, and headed, "Praise and Prayer for the Office-bearers of the Church." In 1836 it was included in J. Conder's Congregational Hymn Book, No. 193, and in some copies it was signed "Conder," in the index. This, however, was subsequently omitted. The history of this hymn goes back to Rippon's Baptist Selection, 1787, No. 417, "Fair Sion's King, we suppliant bow," which was given in the 4th edition of J. Dobell's New Selection (1st edition 1806), No. 209 (second part), as, "Great King of Sion, gracious God." This was again rewritten and given in Urwick's Hymns as above. Its authorship has not been determined.

All tunes published with 'Great King of Saints'^ top 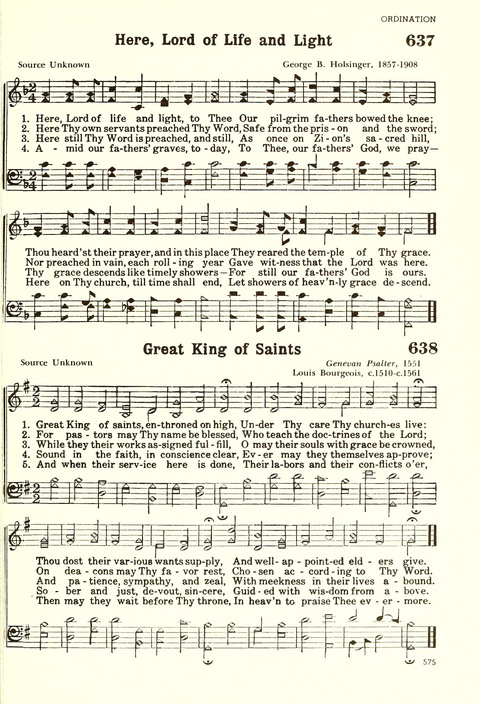 Congregational Hymn and Tune Book; containing the Psalms and Hymns of the General Association of Connecticut, adapted to Suitable Tunes #1142

Psalms and Hymns, for Christian Use and Worship #H568

The Baptist Hymn and Tune Book for Public Worship #810