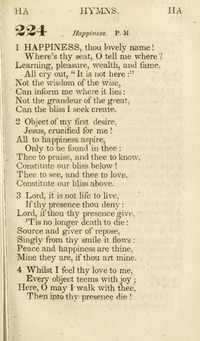 1 Happiness! thou lovely name,
Where's thy seat? O tell me where?
Learning, pleasure, wealth, and fame,
All cry out, "It is not here."


2 Lord, it is not life to live,
If thhy presence thou deny.
Lord, if thou thy presence give,
'Tis no longer death to die.


3 Source and giver of repose,
Mine it is, if thou art mine.
Singly from thy smile it flows;
Peace and happiness are thine.


4 Whilst I feel thy love to me,
Ev'ry object yields me joy.
Here O may I walk with thee,
Then into thy presence die.


5 Let me but thyself possess,
Real bliss I then shall prove--
Total sum of happiness,
Heav'n below, and heav'n above!

Source: A Collection of Hymns and Prayers, for Public and Private Worship #351

Happiness, thou lovely name. A. M. Toplady. [Happiness.] First printed in the Gospel Magazine, Oct., 1774, in 4 stanzas of 8 lines. It was not given by Toplady in his Psalms & Hymns, 1776; but appeared in 1793 in Hymns Compiled by Joseph Middleton, London, No. 27line In Bickersteth's Christian Psalmody, 1833, No. 147, stanzas i.-iii. were given as "Happiness! delightful name! " This form of the text is also in later collections. There are also "Man to happiness aspires," in Kennedy, 1863, and "Lord, it is not life to live;" but the most popular form of the hymn is stanzas ii., iii., as, "Object of my first desire." This is in extensive use in Great Britain and America. Full text in D. Sedgwick's reprint of Toplady's Hymns & Sacred Poems, &c, 1860, p. 158.

All tunes published with 'Happiness, thou lovely name'^ top 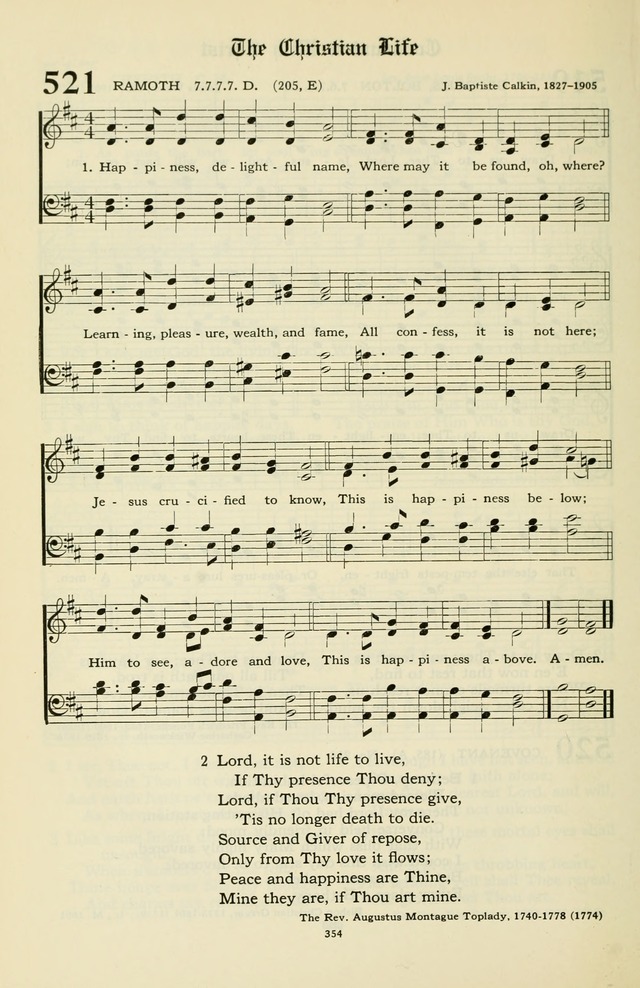 A Collection of Hymns and a Liturgy #579

A Collection of Hymns and Prayers, for Public and Private Worship #351

A Collection of Hymns, for the Use of the Protestant Church of the United Brethren. New and Revised ed. #401

A New Selection of Psalms, Hymns and Spiritual Songs #884

A Selection of Hymns for the Use of Social Religious Meetings and for Private Devotions. 7th ed. #220

A Selection of Hymns, adapted to the devotions of the closet, the family, and the social circle; and containing subjects appropriate to the monthly concerns of prayer for the success... #224

Hymnal and Liturgies of the Moravian Church #521

Hymns of the Church Militant #454b

Hymns, Selected from Various Authors, for the Use of Young Persons 3rd Am. from 9th London ed. #d82

Hymns, Selected from Various Authors, for the Use of Young Persons #d74

Psalms, Hymns, and Spiritual Songs #B90

The Halifax Selection of Hymns #d171

The Liturgy and the Offices of Worship and Hymns of the American Province of the Unitas Fratrum, or the Moravian Church #1058