Hark! a voice saith, All are mortal

Hark! a voice saith, All are mortal

1 Hark, a voice saith, all are mortal,
Yea, all flesh must fade as grass;
Only through a death-rent portal
To a better world ye pass;
Dust to dust must sink inglorious
Ere this body rise victorious
To the realms of life and light,
Won for saints thro' Jesus' might.


2 Therefore, when my Father chooses,
Willingly my life I'll yield;
He but gains, nay, never loses,
Who with Jesus quits the field;
For in my Redeemer's merit
Peace has found my troubled spirit,
And in death my comfort this:
Jesus' death assures me bliss.


3 In those bright celestial regions
All is life and peace and joy;
Souls are there in countless legions,
Happy in the Lord's employ.
There the Seraphim are dwelling
Who, in holiness excelling,
Praise with heaven's mighty host
Father, Son and Holy Ghost.


4 There the patriarchs are living,
There the prophets all abide,
There th'apostles, homage giving,
Ever dwell at Jesus' side.
There the Lord's whole congregation
Has its place of habitation;
There, to honor God, their King,
All their hallelujahs sing.


5 O blest city of the sainted,
Wondrous fair Jerusalem,
How thy beauty, pure, unattained,
Sparkles like a precious gem!
What sweet voices there are sounding,
And what joys are there abounding!
Night shall never follow day,
Light from God will shine for aye.

Albinus, Johann Georg eldest s. of Zacharias Albinus, pastor at Unter-Nessa, near Weissenfels, Saxony, 1621-1633, and at Stuhlburgwerben, 1633-1635, was b. at UnterNessa, March 6, 1624. After his father's death, in 1635, he was, in 1638, adopted by his cousin, Lucas Pollio, diaconus at St Nicholas's Church in Leipzig. After his cousin's death, in 1643, the Court preacher, Sebastian Mitternacht, of Naumburg, took an interest in him, and he remained at Naumburg till he entered the University of Leipzig, in 1645. He studied for eight years at Leipzig, during which time ho acted as house tutor to the Burgomaster, Dr. Friedrich Kuhlwein, and was then, in 1653, appointed Eector of the Cathedral School at Naumburg. This post he resigned when, in… Go to person page >

i. Alle Menschen mussen sterben. [For the Dying.] This hymn, which Koch, iii. 397, calls "his best known hymn, and a pearl in the Evangelical Treasury of Song," was written for the funeral of Paul von Henssberg, a Leipzig merchant, and was thus sung, from broadsheets, June 1, 1652. It was given in Niedling's Wasserquelle, Altenburg, 1663, and gradually came into universal use, passing through Freylinghausen's Gesang-Buch, 1704, into most subsequent collections, as in the Unverfalschter Liedersegen, 1851, No. 804, in 8 stanzas of 8 lines. It was a great favourite of P. J. Spener, who sang it regularly on Sunday afternoons; of J. F. Hochstetter, Prelate of Murrhardt, and many others (Koch, viii. 628-631).
In the Blatter fur Hymnologie, 1884, pp. 55-58, the text is quoted in full from the original broadsheet [Ducal Library, Gotha], the title of which ends "Mit seiner Poesie und Musick erweisen wollen Johannes Rosenmuller." Rosenmuller is not, however, known as a hymn-writer, and this statement is hardly sufficient to overthrow the traditional ascription to Albinus.
The translations in common use are:—

The composer of the tune is unknown; it was first published in Das grosse Cantional: oder Kirchen-Gesangbuch (Darmstadt, 1687) to the text "Alle Menschen mussen sterben" by J. G. Albinus; some Baroque organ works are associated with that text. The tune became associated with Homburg's text since the…

All tunes published with 'Hark! a voice saith, All are mortal'^ top 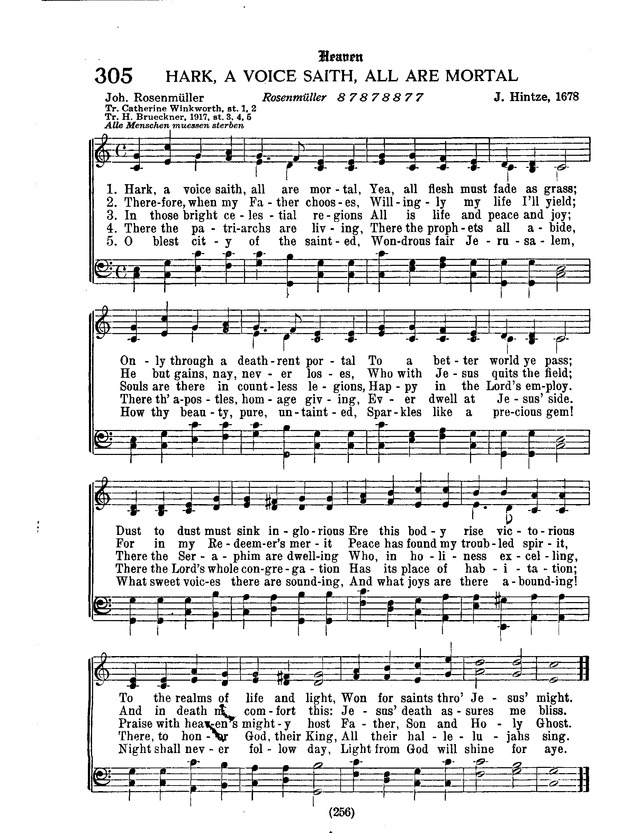 Chorale Book for England, The #196