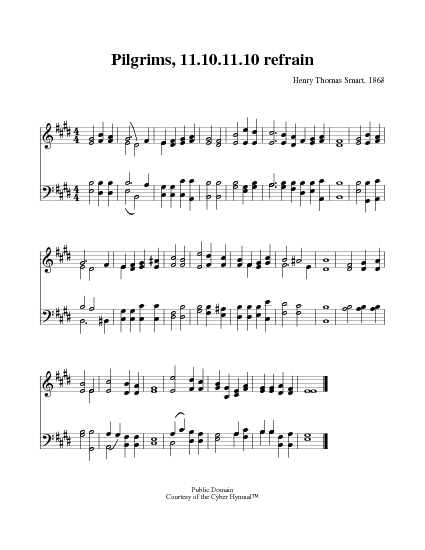 1 Hark, hark, my soul! Angelic songs are swelling
O’er earth’s green fields and ocean’s wave-beat shore;
How sweet the truth those blessed strains are telling
Of that new life when sin shall be no more.


Refrain:
Angels of Jesus, Angels of light,
Singing to welcome the pilgrims of the night.


2 Onward we go, for still we hear them singing:
“Come, weary souls, for Jesus bids you come;”
And through the dark, its echoes sweetly ringing,
The music of the gospel leads us home. [Refrain]


3 Far, far away, like bells at evening pealing,
The voice of Jesus sounds o'er land and sea,
And laden souls by thousands meekly stealing,
Kind Shepherd, turn their weary steps to Thee. [Refrain]


4 Angels, sing on, your faithful watches keeping;
Sing us sweet fragments of the songs above,
Till morning’s joy shall end the night of weeping,
And life’s long shadows break in cloudless love. [Refrain]

Hark, hark, my soul; Angelic songs are swelling. F. W. Faber. [Evening.] Published in his Oratory Hymns, 1854, and again in his Hymns, 1862, p. 385, in 7 stanzas of 4 lines, and entitled, "The Pilgrims of the Night." Five stanzas in an altered form were given in the Appendix to Hymns Ancient & Modern, 1868, No. 325. By this means the hymn was brought prominently before the public, and became exceedingly popular for a time. Its unreality, however, was excluded it from many of the best modern collections. In the Book of Prayer & Praise for use in Sir Jonah Mason's Orphanage, Erdington, 1883, No. 293, beginning, "Hark, hark, my soul, thy Father's voice is calling," is an imitation of this hymn. It is also in Allon's Children's Worship, 1878, No. 234.

All tunes published with 'Hark! hark, my soul! Angelic songs are swelling'^ top 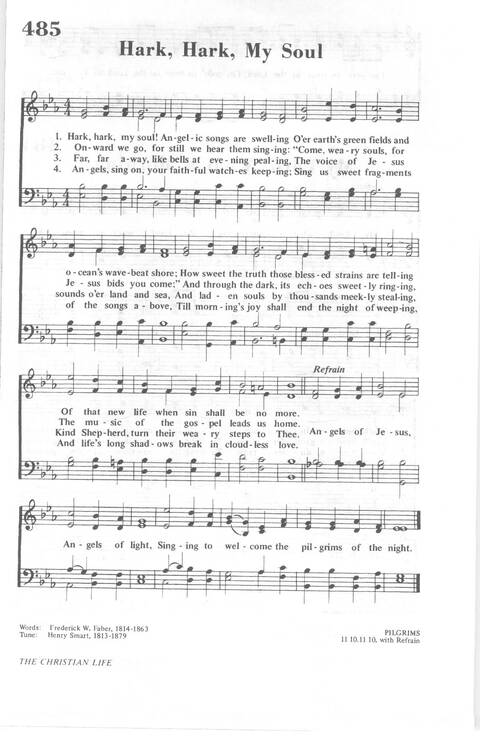 The Song Book of the Salvation Army #802