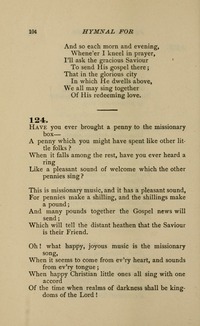 Have you ever brought a penny to the missionary box

Elliott, Emily Elizabeth Steele, third daughter of the late Rev. E. B. Elliott, of Brighton, author of the Horae Apocalypticae was born at Brighton, and now [1887] lives in London. She has contributed hymns, some of which have obtained wide acceptance, to the choir manuals, and Additional Hymns, 1866 (Nos. 8, 34) for use in St. Mark's Church, Brighton; to the Church Missionary Juvenile Instructor, which she edited for six years. Her Chimes of Consecration, a volume of 70 hymns and poems, was published in 1873, and her Chimes for Daily Service in 1880. The latter contains 71 hymns in two parts. The second part of 48 hymns is also published separately as Under the Pillow, for use as a cheap large type hymn-book (with corresponding tune-book)… Go to person page >
^ top

Have you ever brought a penny to the missionary box? Emily E. S. Elliott. [Children's Mission Hymn.] First published 1855, in the Church Missionary Juvenile Instructor. Included, slightly altered, as No. 19 of the Children's Hymns in Wilson's Service of Praise, 1865, in 6 stanzas of 4 lines. In 1873, Dr. W. F. Stevenson included stanzas iii.-vi., beginning, "O how joyous is the music of the missionary song," in his Hymns for Church and Home; and this was repeated in Wilson's Songs of Zion, 1878, and in Allon's Children's Worship, 1878. In the latter it begins, "O joyous is the music." [Rev. James Mearns, M.A.] 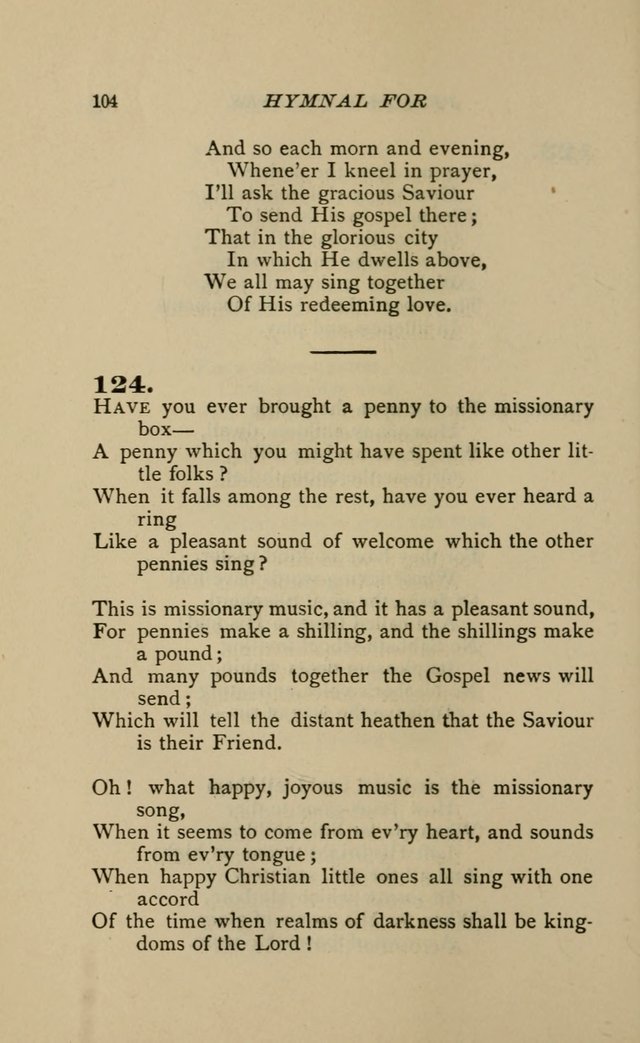 View Page
Hymnal for Primary Classes: a collection of hymns and tunes, recitations and exercises, being a manual for primary Sunday-schools (1896), p.101
^ top