How Long Will You Forget Me, LORD 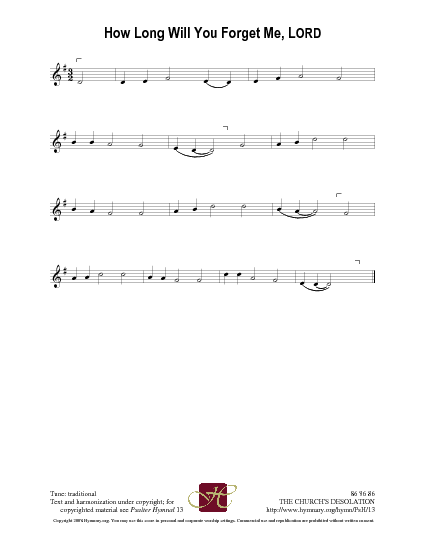 How long will you forget me, LORD, and hide your face from me?

Marie (Tuinstra) Post (b. Jenison, MI, 1919; d. Grand Rapids, MI, 1990) While attending Dutch church services as a child, Post was first introduced to the Genevan psalms, which influenced her later writings. She attended Calvin College, Grand Rapids, Michigan, where she studied with Henry Zylstra. From 1940 to 1942 she taught at the Muskegon Christian Junior High School. For over thirty years Post wrote poetry for the Grand Rapids Press and various church periodicals. She gave many readings of her poetry in churches and schools and has been published in a number of journals and poetry anthologies. Two important collections of her poems are I Never Visited an Artist Before (1977) and the posthumous Sandals, Sails, and Saints (1993). A member… Go to person page >
^ top

An anguished prayer asking God to restore the psalmist from a prolonged, serious illness that encourages enemies to gloat over the prospect of his death.

This lament appears to rise from a time of serious illness that could lead to death (v. 3). In singing it, we take on our lips the prayer of an anguished, impatient psalmist who has waited long for God to restore health and vigor and thus deliver him from the gloating of his enemies (st. 1), and who prays for restoration lest death come and the enemies triumph (st. 2). In closing, we profess confidence in God's restoring power and vow to praise the LORD for his goodness (st. 3). Marie J. Post (PHH 5) versified Psalm 13 in 1982 for the Psalter Hymnal.

Liturgical Use:
Times when God's people are weakened by sickness or other distresses and opposing forces gloat over their vulnerability.

J. T. White composed THE CHURCH'S DESOLATION in 1844 for The Sacred Harp (1844), edited by B. F. White and E. J. King. There it became a setting for the text “Well May Thy Servants Mourn, My God, the Church's Desolation.” Suitably plaintive for the text, this tune is reminiscent of other white s…

All tunes published with 'How Long Will You Forget Me, LORD'^ top