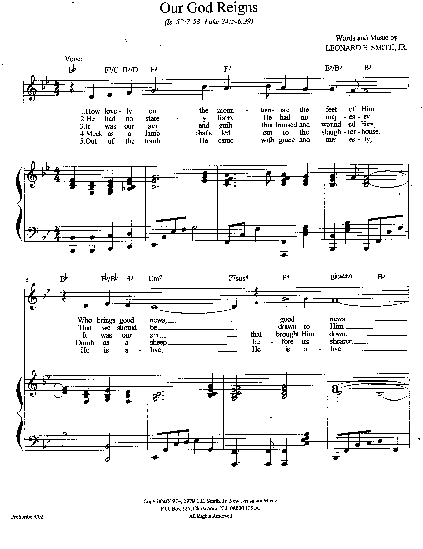 How lovely on the mountains are the feet of him

1 How lovely on the mountains
Are the feet of him
Who brings good news,good news
Announcing peace, proclaiming
News of happiness.
Our God reigns; our God reigns!


2 He had no stately form;
He had no majesty,
That we should be
drawn to Him.
He was despised,
and we took no account of Him,
Yet now He reigns
With the Most High. [Chorus]


3 Out of the tomb He came
With grace and majesty;
He is alive, He is alive.
God loves us so see here His hands,
His feet, His side.
Yes, we know
He is alive. [Chorus]

Isaiah 52:7 speaks of "good news," originally referring to Israel's delivery from captivity and return to Jerusalem. Today Christians sing these words to celebrate our delivery from sin through Christ
(Rom. 10:15-16), who brings salvation and a restoration of God's rule, resulting in peace and happiness. The song text combines Isaiah's message with the theme that rings throughout the Psalms: God reigns!

Leonard E. Smith, Jr., (b. Philadelphia, PA, 1942) composed this song in 1973 in Riverton, New Jersey. Educated at Mount St. Mary's Seminary in Emmitsburg, Maryland, where he received a BA in philosophy, Smith first taught in public high schools, but his evangelical efforts in the schools created problems, resulting in his dismissal. He then began painting houses to support his family.

One night as he was reading Isaiah 52 he was overwhelmed by the conviction that God was in control of his life and of all creation; he wrote this song that night in just five minutes. The song was first sung at New Covenant Community Church, where Smith served as worship leader. Though not published for some time, it became known internationally when evangelist Bob Mumford included it in his crusades. It was first published in a Servant Publications hymnal, Songs of Praise (vol. 2, 1977). In 1978 Smith added four additional verses. He has published over 130 Scripture songs with New Jerusalem Music Co.

Liturgical Use:
Mission services; ordination services; Epiphany; Pentecost; Ascension. The chorus alone can be used as an acclamation, especially in informal services, or it can be used as a frame to surround another hymn such as "Sing Praise to the Lord" (466), or, if transposed to C major, added to Psalm 93 or 97.

OUR GOD REIGNS is an effective tune that gains its strength and popularity from its powerful chorus, in which hammer-stroke chords (in the style of George F. Handel's oratorios) proclaim "Our God reigns!" Dale Grotenhuis (PHH 4) harmonized the tune in 1984 for the Psalter Hymnal. OUR GOD REIGNS lend…

All tunes published with 'Our God Reigns'^ top

The Hymnal for Worship and Celebration #229 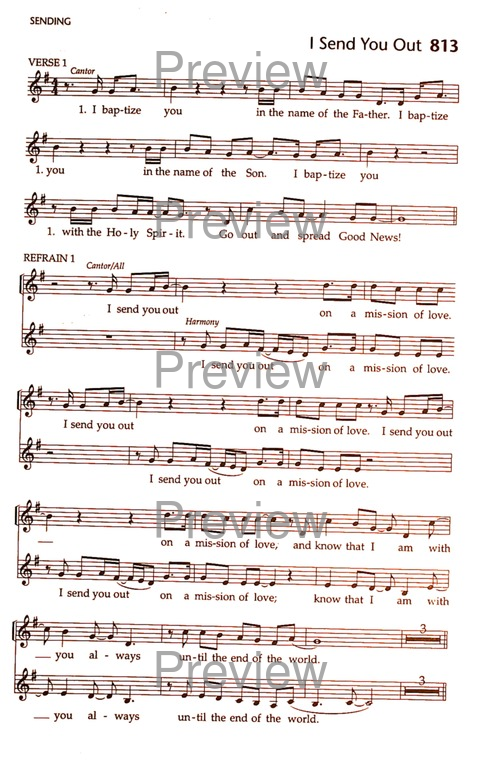 The Hymnal for Worship and Celebration #229