I come to the garden alone

1 I come to the garden alone,
While the dew is still on the roses;
And the voice I hear, falling on my ear,
The Son of God discloses.


Refrain:
And He walks with me, and He talks with me,
And He tells me I am His own,
And the joy we share as we tarry there,
None other has ever known.


2 He speaks, and the sound of His voice
Is so sweet the birds hush their singing;
And the melody that He gave to me
Within my heart is ringing. [Refrain]


3 I'd stay in the garden with Him
Tho' the night around me be falling;
But He bids me go; thro' the voice of woe,
His voice to me is calling. [Refrain] 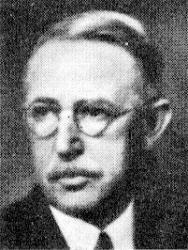 All tunes published with 'In the Garden'^ top

One occasionally hears stories of someone who disappeared and was assumed dead suddenly reappearing to their family and loved ones in a joyful surprise. Imagine how much greater Mary Magdalene's shock and elation was when Jesus, whom she had seen dead and buried three days earlier (Mark 15:40, 47), suddenly called her by name and she turned and saw Him, very much alive and in person (John 20:16). This hymn elaborates on the emotions she may have felt in that moment, when her grief was turned to joy.

This text was written by C. Austin Miles in 1912. By his own account (as given in George Sanville's Forty Gospel Hymn Stories), he saw a vivid dream after reading John 20, and was then inspired to write this hymn about the first encounter between Mary Magdalene and her risen Lord.

Miles's hymn has been criticized for being overly sentimental and even erotic. When put in the context of the Scripture that inspired it, one can see that Miles wrote the song from Mary's point of view. In it, she expresses the great joy she must have felt on suddenly hearing and seeing her beloved Savior after witnessing His death and burial (Mark 15:40, 47). However, the long and loving communion to which the refrain alludes is not recorded or implied in the biblical account (John 20:14-18), which rather indicates that their conversation was quite short – as soon as Mary recognizes Jesus, He tells her to go. Perhaps Miles means that that moment was so overflowing with the sudden change of emotions from grief to joy that time seemed to stand still.

The tune GARDEN was written at the same time as the text by C. Austin Miles. They were published for the first time together in The Gospel Message No. 2 in 1912. Originally, the tune had two-part treble harmony on the stanza and standard four-part harmony on the refrain, but in modern hymnals, the entire hymn is given in four-part harmony. Because the hymn was written from Mary's point of view, it might be good to have the women or a soloist sing the entire song, or just the stanzas (with the entire group on the refrain).

Because this hymn narrates and expands on part of the Resurrection account, it is best suited for Easter morning, whether in a simple handbell setting like “In the Garden” as a quiet prelude, or an organ setting for an offertory (as in “With Everlasting Alleluias”, or a choral anthem based on “In the Garden” before the sermon. Unlike many Easter hymns, which overflow with proclamations of victory well suited to brass and full organ, this hymn provides a relatively quiet reflection best suited to simple piano or light instruments. 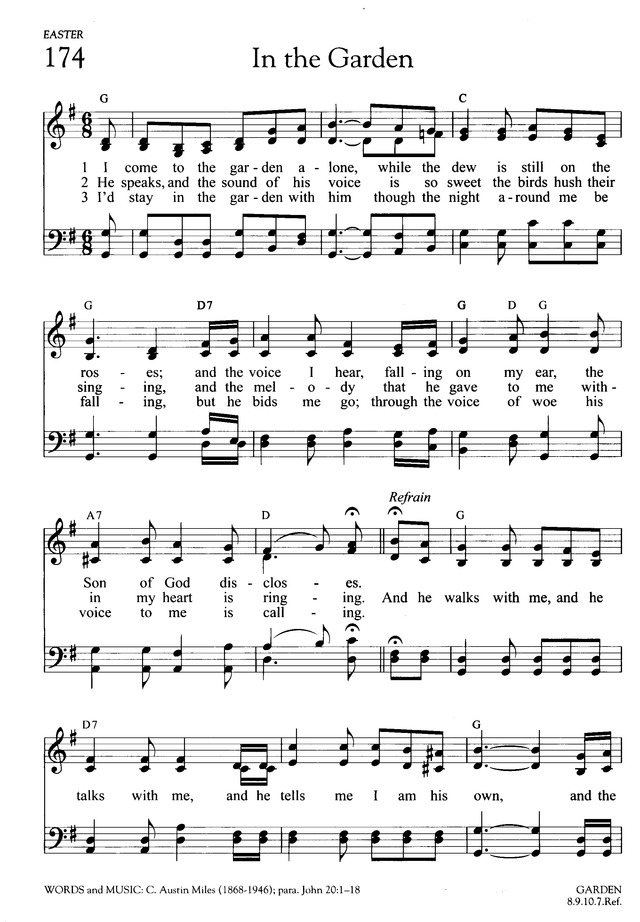 Hymns for a Pilgrim People #205

Lift Every Voice and Sing II #69

Display Title: And He walks with me, and He talks with me First Line: I come to the garden alone Tune Title: GARDEN Author: C. Austin Miles Meter: Irregular
Small Church Music #76

Display Title: In the Garden First Line: I come to the garden alone Date: 2007
Songs of Inspiration #9

The Hymnal for Worship and Celebration #425