1 The strife is o'er, the battle done;
the victory of life is won;
the song of triumph has begun.
Alleluia!


2 The powers of death have done their worst,
but Christ their legions has dispersed.
Let shouts of holy joy outburst.
Alleluia!


3 The three sad days are quickly sped;
he rises glorious from the dead.
All glory to our risen Head.
Alleluia!


4 He closed the yawning gates of hell;
the bars from heaven's high portals fell.
Let hymns of praise his triumph tell.
Alleluia!


5 Lord, by the stripes which wounded thee,
from death's dread sting thy servants free,
that we may live and sing to thee.
Alleluia!

All tunes published with 'The strife is o'er, the battle done'^ top

Although hymnologist Austin Lovelace describes this as “a poor hymn which has ridden to success on the coattails of a fine tune” (The Anatomy of Hymnody, 52), there is also something very profound and triumphant about the text which Lovelace seems to miss. There is, in this text, a sense of finality. This, in a very real sense, is it. “It is finished.” Albert Bailey writes, “The words present the theological statement that the Crucifixion was a contest between Christ and the devil’s legions, in which Christ won. This is proved by the fact that Christ did not stay dead” (The Gospel in Hymns, 278). Christ rose and brought new life, and in so doing, through his declaration, “It is finished,” was also saying, “It has all just begun!” The finality of this text is the finality of newness. It is the realization that we are continually being made new, that Creation in continually being restored, and that every day we are called to life anew with Christ. Alleluia. What a song of victory that is!

These anonymous words first appeared in the Jesuit collection, Symphonia Sirenum Selectarum in 1695. They were translated by Francis Pott in 1859, and published in five stanzas. These stanzas appear in most modern hymnals, though some, such as the Presbyterian Hymnal and the United Methodist Hymnal, leave out the fourth verse, which begins, “He closed the yawning gates of hell,” or, “He broke the age-bound chains of hell.” Other phrases or words are slightly varied between hymnals; the first verse in the Psalter Hymnal reads, “the victory of life is won,” whereas that same line in Worship and Rejoice is, “now is the victor’s triumph won.” These are all simply matters of prose, and don’t alter the meaning of the text in a significant way.

Each verse follows a similar pattern. We first proclaim some aspect of Christ’s victory over death, and then add our emotional response to this victory.

The tune VICTORY comes from the choral mass Magnificat Tertii Toni by the Italian Renaissance composer Giovanni Pierluigi da Palestrina, specifically from the “Gloria Patri.” The opening phrases of the Gloria were adapted by William Monk into the tune we sing now. He also added the final “alleluias.” The tune of the verses can actually become rather somber unless sung at a lively tempo with a festive declaration of the “alleluias.” This is a very popular hymn for handbell choir, and there are a number of arrangements to choose from, all of which can be found under “Arrangements” further down this page. The tune GELOBT SEI GOTT, composed by Melchior Vulpius, is a good alternative tune.

This Easter hymn could be sung at any point during an Easter morning service, but would perhaps be most powerful when sung at the close of worship. The great number of “alleluias” sung throughout makes it, in a sense, a final shout of joy to celebrate Christ’s victory over the grave, and propels us into further celebration after we have left our churches or places of worship. 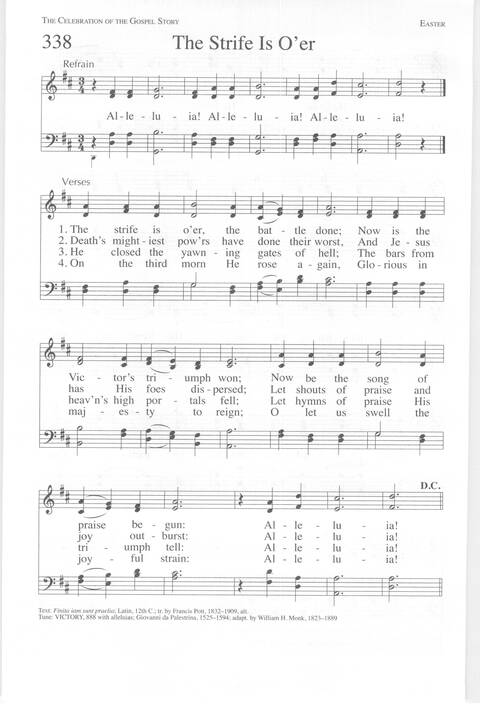 Hymns for a Pilgrim People #199

Hymns of the Christian Life #101

The Song Book of the Salvation Army #151