In the land of Galilee

Author: H. R. Jeffrey
Tune: [In the land of Galilee]
Published in 4 hymnals

1 In the land of Galilee,
Look! what is it that we see?
Surely, something more than common is at hand;
Multitudes of people pass,
’Tis a mighty, moving mass,
Moved by pow’r that’s more than mortal to command.


Refrain:
Forward, forward are they marching,
As the years still come and go;
As they’re marching hear them sing,
“We are following our King,
He’s our Leader and no other will we know.”


2 Eighteen hundred years and more,
Land to land, from shore to shore,
With the King of glory always in the lead;
Through the fire and through the blood
Persecution’s awful flood
Thins their ranks, but still they onward do proceed. [Refrain]


3 Through the darkness, through the light,
Through twelve hundred years of night,
But the morning of the day doth now appear;
See the mighty blood-washed throng,
Marching on with shout and song,
The full day of final vict’ry draweth near. [Refrain]


4 Through the dark and cloudy day
They’re still marching on their way,
See their numbers are increasing more and more;
The three days and half are past,
Light sublime has come at last—
’Tis revealing that the cloudy day is o’er. [Refrain]


5 Now they’ve reached the evening light,
Clothed in robes of snowy white,
Still they’re marching on to certain victory;
Satan’s hosts they now defy,
“God has conquered!” hear them cry,
As they reach the borders of eternity. [Refrain]

[In the land of Galilee] 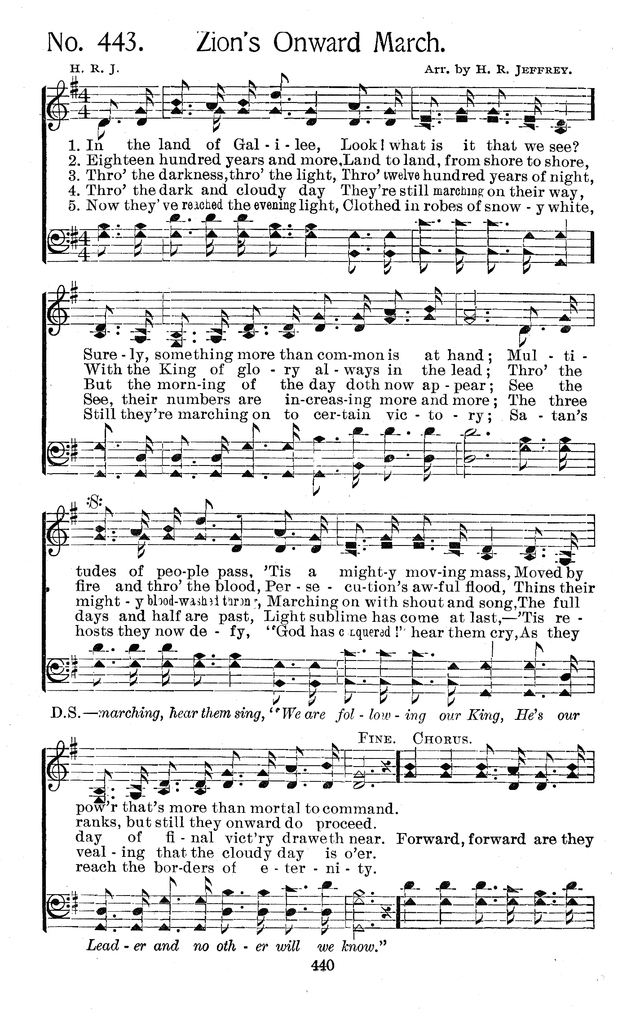