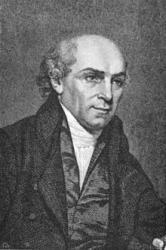 Carey, William, D.D., the first Baptist Missionary in India, was born at Paulerspury, Northamptonshire, in 1762, educated for the Baptist ministry, and left England for India in 1793. He was for some time at Mdnapatty, Bengal. Because of the hostile attitude of the East Indian Company towards missions, he with his companion John Fountain (p. 384, ii.) removed to Serampore, and placed himself under Dutch protection in 1799, and joined Joshua Marshman, then recently arrived in India. He was sometime professor of Sanskrit in Calcutta. He died at Serampore in 1834. He was the first to compose Christian hymns in Bengali, several of which are in common use in India. --John Julian, Dictionary of Hymnology, Appendix, Part II (1907)  Go to person page >
^ top

Hymns for the King's Children #d60