Jesu, with Thy Church Abide 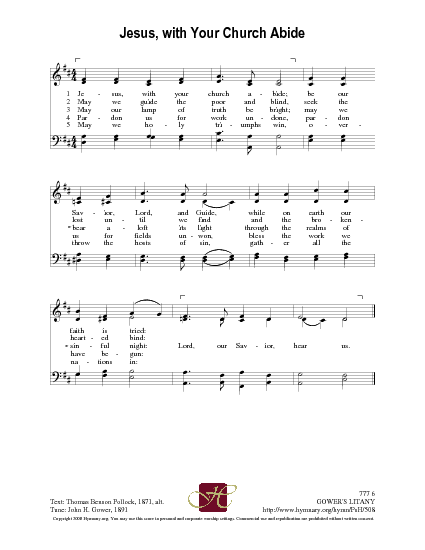 Jesu, with Thy Church abide

1 Jesus, with thy church abide;
be her Savior, Lord, and Guide,
while on earth her faith is tried:
we beseech thee, hear us.


2 Keep her life and doctrine pure;
grant her patience to endure,
trusting in thy promise sure:
we beseech thee, hear us.


3 May she one in doctrine be,
one in truth and charity,
winning all to faith in thee:
we beseech thee, hear us.


4 May she guide the poor and blind,
seek the lost until she find,
and the broken-hearted bind:
we beseech thee, hear us.


6 Save her love from growing cold,
make her watchmen strong and bold,
fence her round, thy peaceful fold:
we beseech thee, hear us.


7 May her lamp of truth be bright,
bid her bear aloft its light
through the realms of heathen night:
we beseech thee, hear us.


8 Arm her soldiers with the cross,
brave to suffer toil or loss,
counting earthly gain but dross:
we beseech thee, hear us.


9 May she holy triumphs win,
overthrow the hosts of sin,
gather all the nations in:
we beseech thee, hear us. 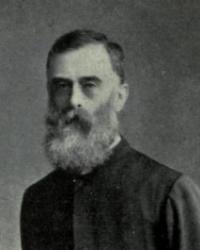 Pollock, Thomas Benson, M.A., was born in 1836, and graduated at Trinity College, Dublin, B.A. 1859, M.A. 1863, where he also gained the Vice-Chancellor's Prize for English Verse in 1855. Taking Holy Orders in 1861, he was Curate of St. Luke's, Leek, Staffordshire; St. Thomas's, Stamford Hill, London; and St. Alban's, Birmingham. Mr. Pollock is a most successful writer of metrical Litanies. His Metrical Litanies for Special Services and General Use, Mowbray, Oxford, 1870, and other compositions of the same kind contributed subsequently to various collections, have greatly enriched modern hymnbooks. To the 1889 Supplemental Hymns to Hymns Ancient & Modern, Mr. Pollock contributed two hymns, “We are soldiers of Christ, Who is mighty to save… Go to person page >
^ top

John Julian explains that the author of this text, Thomas B. Pollock (b. Strathallan, Isle of Man, England, 1836; d. Birmingham, England, 1896), was a most successful writer of metrical litanies. Many of them were published in Pollock's Metrical Litanies for Special Services and General Use (1870) and appeared in a variety of mainly Anglican hymnals. Originally written for a prayer day organized by the Society for the Propagation of the Gospel, this text was published in eighteen stanzas in Pollock's 1871 Appendix to his Metrical Litanies and was revised for the 1875 edition of Hymns Ancient and Modern. Like other modern hymnals, the Psalter Hymnal provides various parts of these different versions in a five-stanza text.

A litany is a form of prayer that has a number of petitions but usually only one response or refrain (see Ps. 136 for this structure). This text, Pollock's "Litany of the Church," has that pattern: the stanzas offer various prayers for the church, its members, and its ministries. Each prayer concludes with the response "Lord, our Savior, hear us" (originally, 'We beseech thee, hear us").

Educated at Trinity College, Dublin, Ireland, Pollock first studied medicine, but he changed his studies to theology and was ordained in the Church of England in 1861. In 1865, after serving several parishes, Pollock took the position of curate at St. Alban Mission Church in Birmingham, where his brother had the higher position of vicar.

Remaining curate for thirty years, Pollock became vicar after his brother’s death but died a year later. Although he had many opportunities to serve in more prestigious positions, he chose to work among the poor of Birmingham. He was a member of the committee that compiled the 1861 edition of Hymns Ancient and Modern.

Liturgical Use:
As a part of the main prayers of a worship service; church meetings and mission services, especially when sung in true litany fashion.

GOWER'S LITANY comes from John H. Gower's Original Tunes (1890). This serviceable tune works with the text but unfortunately lacks a suitable harmonization (the worst of Gower's chromatic harmony has been removed from the Psalter Hymnal). Try singing the hymn in true litany style: have a soloist or…

All tunes published with 'Jesu, with Thy Church Abide'^ top 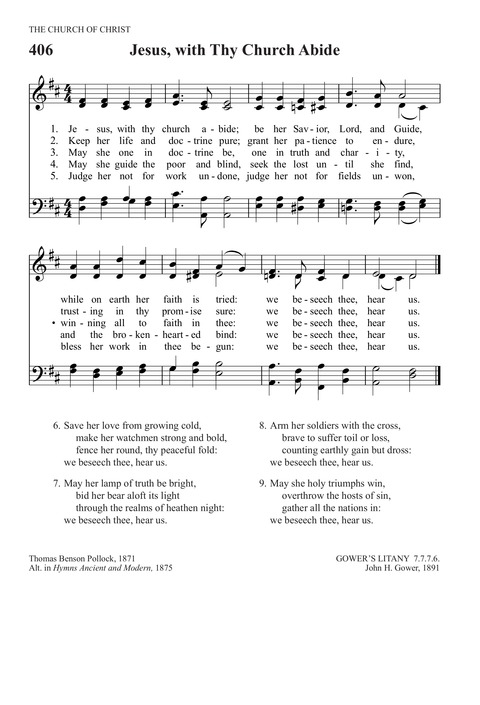