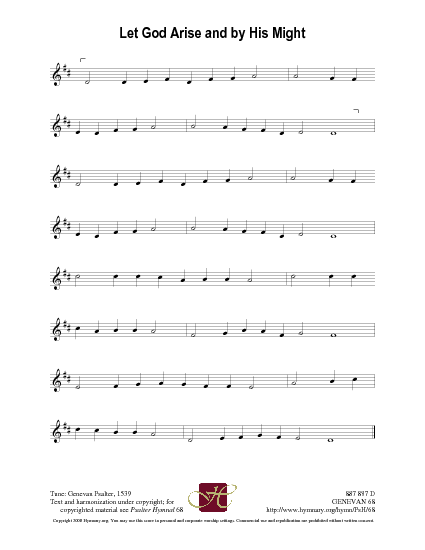 Let God Arise, and by His might, Put all his enemies to flight

A celebration of God’s triumphant march from Mount Sinai to Mount Zion–the establishment of his kingdom.

At Sinai God established Israel as the people of his kingdom, organized them as his army, and set out as their head to conquer the promised land. When the conquest was at last completed through the wars fought by King David, God's royal temple (palace) was erected on Mount Zion, marking the full establishment of his kingdom among the kingdoms of the world. That triumph gave Israel hope that God's kingdom would never fail, that it would humble all the nations, and that ultimately it would engage all the kingdoms of the earth in God's praise.

This psalm belonged to the liturgy of a religious festival celebrated at Jerusalem (perhaps the Feast of Tabernacles). It was probably accompanied by a liturgical procession that reenacted God's triumphant march from Sinai to the temple in Jerusalem (see also 24).

The striking thematic structure of the psalm is captured in the nine stanzas; the odd-numbered stanzas carry the action of the procession forward, and the even-numbered reflect on God's rule and power. Stanza 1 marks the beginning of God's march from Sinai (and of the liturgical procession; see Num. 10:35-36). Stanza 2 calls for praise of the LORD as "our salvation." Stanza 3 describes God's march through the desert to the promised land, and stanza 4 hails God's victories over the kings of Canaan. Stanza 5 reports the LORD's triumphant ascent of Mount Zion, and stanza 6 responds with praise of the LORD as the Savior from all that threatens his people. Stanza 7 celebrates the climactic entrance of the LORD (and the liturgical procession) into his holy temple on Zion. Stanza 8 offers a prayer that the LORD may continue to subdue the nations, and stanza 9 rouses all the nations to praise the almighty and triumphant King in his sanctuary.

The versification is mainly by Stanley Wiersma (PHH 25) and John H. Stek (b. Mahaska Co., IA, 1925), with some lines retained (in st. 1, 2, and 6) from the 1931 text by Benjamin Essenberg (1890-1976) included in previous editions of the Psalter Hymnal (1934, 1959). Essenberg was a Christian Reformed minister who served congregations in Michigan and Illinois; earlier editions of the Psalter Hymnal also included his versification of Psalm 81 to GENEVAN 81.

John Stek is professor of Old Testament, emeritus, at Calvin Seminary, Grand Rapids, Michigan, where he taught from 1961 until 1991. He is chair of the Committee on Bible Translation for the International Bible Society, to which he has belonged since 1965. He was translator and coeditor of the New International Version (NIV) of the Bible, of the New International Reader's Version (NIRV), and author and associate editor for the NIV Study Bible. Stek reviewed each of the psalm versifications of the PHH prior to publication for their faithfulness to the Hebrew, and he also prepared the textual commentary on the psalms for this handbook.

Liturgical Use:
Many occasions in Christian worship, especially when the church reflects on the spiritual warfare and triumph of the kingdom of God. Psalm 68 has long been associated with observance of the Reformation.

All tunes published with 'Let God Arise, and by His Might'^ top