Light of the anxious heart Jesus, Thy supplicants cheer 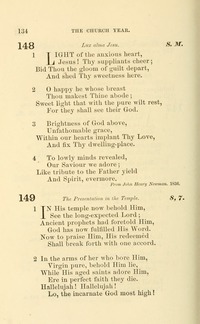 Light of the anxious heart Jesus, Thy supplicants cheer

1 Light of the anxious heart,
Jesus, thy suppliants cheer;
Bid thou the gloom of guilt depart,
And shed thy sweetness here.


2 O happy he whose breast
Thou makest thine abode;
Sweet light that with the pure wilt rest,
For they shall see their God. A-men.


3 Brightness of God above,
Unfathomable grace,
Within our hearts implant thy love
And fix thy dwelling-place.


4 To lowly minds revealed,
Our Saviour we adore;
Like tribute to the Father yield,
And Spirit, evermore.


Source: Service Book and Hymnal of the Lutheran Church in America #475

Robert Campbell was an advocate residing in Edinburgh. He is not much known as an author, but some of his hymns have been adopted in several hymnals. He was Roman Catholic. His death occurred in 1868. --Annotations of the Hymnal, Charles Hutchins, M.A. 1872.… Go to person page >
^ top

Lux alma Jesu mentium. St. Bernard. [The Transfiguration.] In the revised Roman Breviary, 1568, a cento from St. Bernard's "Jesu dulcis memoria" (q. v.), beginning "Amor Jesu dulcissime" [not the cento in Hymns Ancient & Modern "Jesu, Thy mercies are untold," was appointed for Lauds on the Festival of the Transfiguration. The lines were taken from St. Bernard's poem without the least regard to their original connection, and were considerably altered to adapt them to their purpose. We give this altered text below from the Roman Breviary, published at Rome in 1570, p. 778. In the Roman Breviary revised under Urban VIII., 1632, it was recast as "Lux alma Jesu mentium” and this recast has been repeated in all subsequent editions of that revision.
It will be noted that 1.9, “Splendor Paternae," is the first line of the well-known Ambrosian hymn, and is not from St. Bernard's poem. [Rev. James Mearns, M.A.]
The older of the above centos has not been translated into English. The translations of the Lux Jesu mentium are:—
1. Light of the anxious heart, Jesu, Thou dost appear. By Card. Newman, in Tracts for the Times, 1836, No. 75, p. 115; and again in his Verses on Various Occasions, 1868, p. 261. It has been repeated in several collections, but must be distinguished from R. Campbell's translation as given below.
2. Light of the soul, 0 Saviour blest. By E. Caswall, in his Lyra Catholica, 1849, p. 168; and his Hymns & Poems , 1873, p. 91. This is in several modern hymn-books.
3. Light of the anxious heart, Jesu, Thy suppliants cheer. By R. Campbell, in his Hymns & Anthems, 1850, p. 56. In 0. Shipley's Annus Sanctus, 1884, it is given from Campbell's MSS. as, "Light of the troubled heart."
Other translations are:—
1. 0 Christ, when Thy chaste light inspires. Primer. 1706 and 1732.
2. Jesu, Light of souls indwelling. W. J. Copeland. 1848.
3. 0 Jesus, when Thy sweetest light. J. Wallace. 1874.

The tune GORTON derives from the second movement of Ludwig van Beethoven's Piano Sonata No. 23, Opus 57 (1807); however, the arranger and any significance to the tune title are unknown. GORTON was published with this versification of Psalm 79 in the 1912 Psalter. Sing this tune in parts, beginning v…

All tunes published with 'Light of the anxious heart Jesus, Thy supplicants cheer'^ top 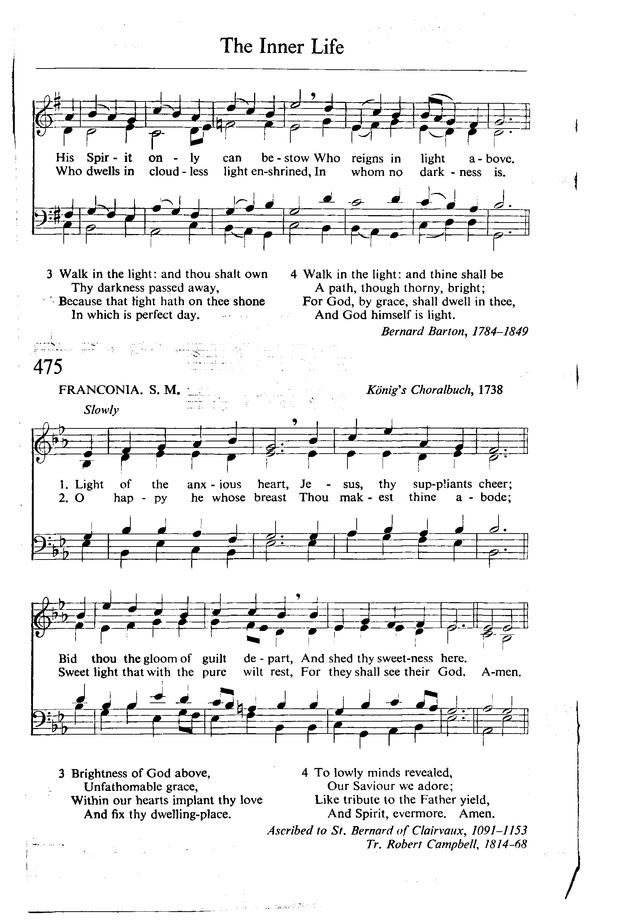 Service Book and Hymnal of the Lutheran Church in America #475

The Hymns for the Use of Evangelical Lutheran Congregations #d257