Lord, Dismiss Us With Thy Blessing 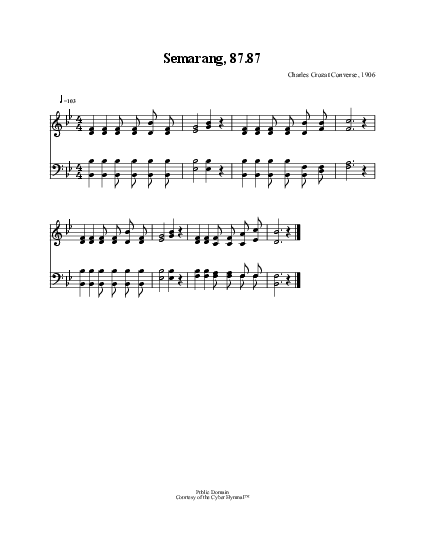 Lord, dismiss us with Thy blessing, Bid us now depart in peace

1 Lord, dismiss us with Thy blessing;
Bid us now depart in peace;
Still on heav’nly manna feeding,
Let our faith and love increase.


2 Fill each heart with consolation;
Up to Thee our hearts we raise;
When we reach our blissful station,
Then we’ll give Thee nobler praise.

Lord, dismiss us with Thy blessing. [Close of Service.] This hymn is found in Dr. Hawker's Psalms and Hymns for the Sunday School in the Parish Church of Charles, Plymouth, 9th edition, no date, 13th edition 1807. In the Crawford and Eberle Index to the Irish Church Hymnal, 1876, p. 53, the editors say:—

"It is found also, but with considerable alterations, in the Rev. Edward Smyth's Collection, Manchester, 1793. Of these two versions that of Hawker seems to be the older, and is possibly by Hawker himself. It is ascribed to him in Baring-Gould's Life of the Rev. R. S. Hawker, where, however, Mr. Baring-Gould has inadvertently quoted the hymn with Fawcett's text which is found indeed in the latest edition of the Charles Collection (1867), but was then introduced in it for the first time by the editor, the Rev. H. A. Greaves. If the eight-line stanza is by Dr. Hawker, it must have appeared in his Collection before 1793. He became Vicar of Charles in 1784, and the Sunday School was established in 1787."

From the time of its appearance in the Charles and the Manchester Collections to the present, it has been republished in numerous hymnals, including D. Simpson's Macclesfield Collection, 1795; the Wesleyan Hymn Book, 1800; Williams & Boden, 1801; Bailey's Siorts Melodies, 1813-1866, and others. In the last case it is given in two stanzas from "Smyth's Manchester Collection " as noted above.

Lord, dismiss us with Thy blessing, p. 687, ii. The date of Hawker's 11th ed. of his Psalms & Hymns as 1811 is an error. The l0th ed. is dated 1807. In his "Advertisement" to this edition the author says that alterations found in the texts of various hymns were introduced in that edition. This hymn is one of those which underwent alterations. The copy of the 13th ed. to which we refer is in the Church House Library, Westminster.

[Israel's Shepherd, guide me, feed me]

SICILIAN MARINERS is traditionally used for the Roman Catholic Marian hymn "O Sanctissima." According to tradition, Sicilian seamen ended each day on their ships by singing this hymn in unison. The tune probably traveled from Italy to Germany to England, where The European Magazine and London Review…

All tunes published with 'Lord, Dismiss Us With Thy Blessing'^ top 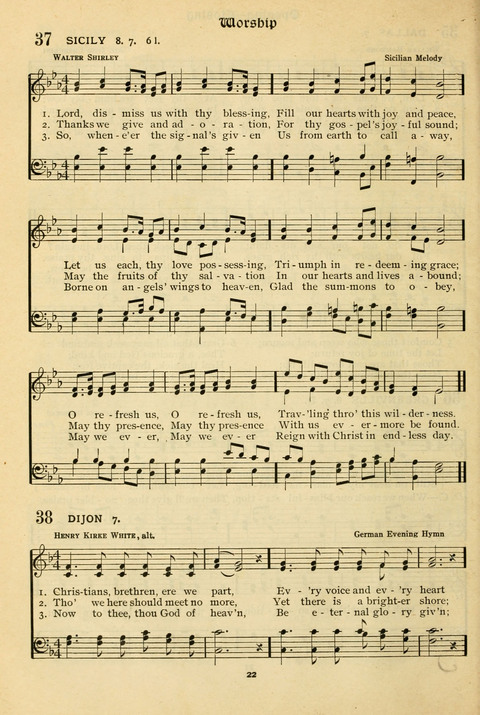 A Selection of Plain Tunes, Set Pieces, and Anthems from Indian Melodies #44

Display Title: Lord, Dismiss Us With Thy Blessing First Line: Lord, dismiss us with Thy blessing Tune Title: SEMARANG Author: Robert Hawker Meter: 87.87 Source: Psalms and Hymns for the Sunday School in the Parish Church of Charles Plymouth, 9th edition, no date (13th edition issued in 1807)
The Cyber Hymnal #8521
Include 149 pre-1979 instances
All instances^ top
Suggestions or corrections? Contact us