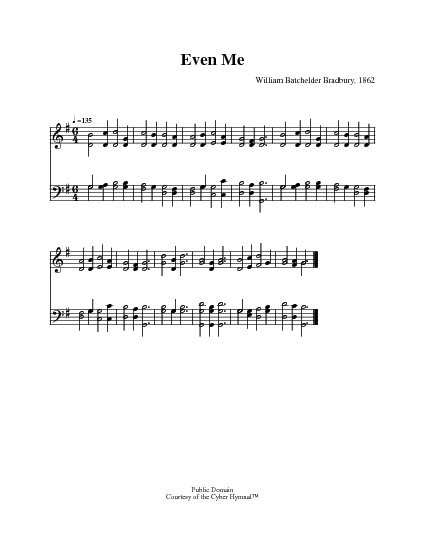 Lord, I hear of showers of blessing

Lord, I hear of showers of blessing. Elizabeth Codner. [Divine Blessing desired.] Although we have the manuscrpt of this hymn in Mrs. Codner's handwriting, sent to D. Sedgwick from Weston-super-Mare, June 18, 1866, wherein it is stated to have been "written in the summer of 1860 " [S. MSS.], we have no personal facts concerning Mrs. Codner and her work except that she published one or two small books, as The Missionary Ship; The Bible in the Kitchen, &c.; edited the periodical, Woman’s Work in the Great Harvest-Field; and was associated for some years with the Mildmay Protestant Mission ( London). "Lord, I hear of showers of blessing" was suggested by the news of the religious revival in Ireland, 1860-61. It is in 7 stanzas of 4 lines, with the refrain “Even me” and is headed "Bless me, even me also, O my Father." The original text is in Spurgeon's Our Own Hymn Book, 1866, No. 607. That in I. D. Sankey's Sacred Songs & Solos, Pt. i., which is usually regarded as the original, is altered in several instances, and stanza v. is omitted. The hymn in full, or in part, is in extensive use, and is specially popular at Mission Services. In 1867 Mrs. Codner wrote a companion hymn of Praise, "Lord, to Thee my heart ascending," in 8 stanzas of 4 lines, for the Rev. E. P. Hammond's Hymns specially adapted for Seasons of Deep Religious Interest, &c, 1867.

[Lord, I hear of showers of blessing] (Bradbury)

All tunes published with 'Even Me'^ top 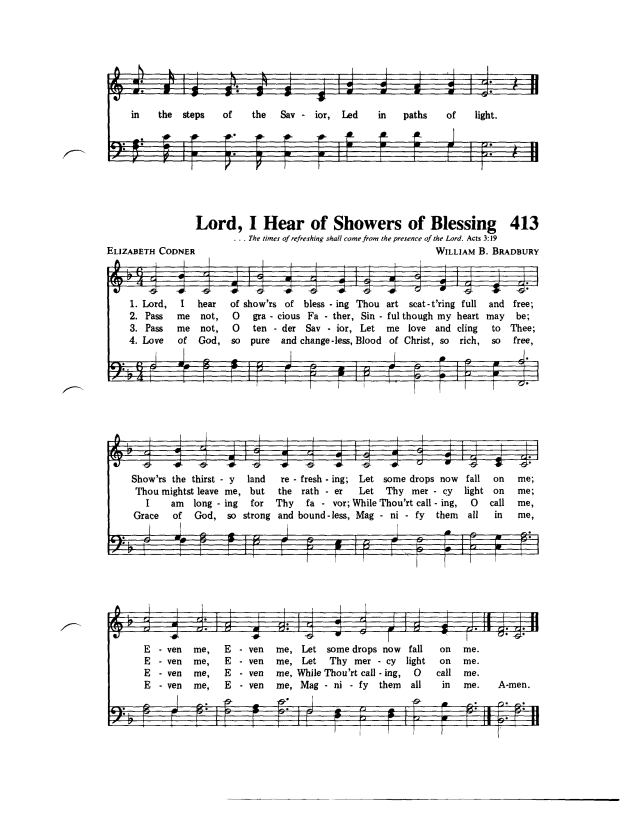 Display Title: Even me, Even me First Line: Lord, I hear of showers of blessing Author: Elizabeth Codner Date: 2012
The Baptist Hymnal #562

Display Title: Even Me First Line: Lord, I hear of showers of blessing Tune Title: EVEN ME Author: Elizabeth H. Codner Source: The Revival, April 28, 1860
The Cyber Hymnal #1379

The Song Book of the Salvation Army #295

Welsh and English Hymns and Anthems #42