Lord, We Cry to You for Help 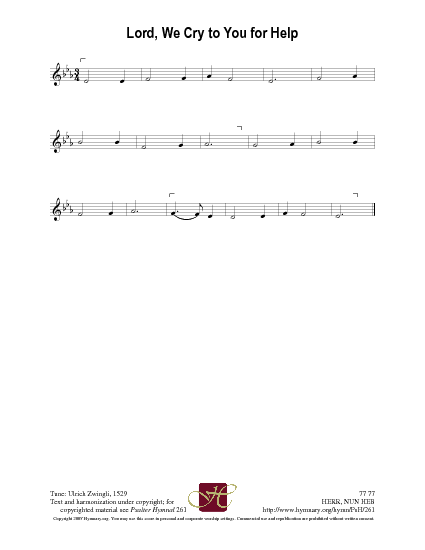 Lord, we cry to you for help 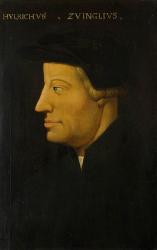 Although Ulrich Zwingli's famous Swiss battle hymn, "Herr, nun heb den Wagen selb!" originally written in three stanzas, is usually dated 1529, Markus Jenny, a Zwingli scholar, thinks Zwingli must have composed it in 1525 or 1526. The English text in the Psalter Hymnal is a loose translation by Helen A. Dickinson (b. Port Elmsley, ON, Canada, 1875; d. Tucson, AR, 1957). She deleted a "chariot" image, inserted a kyrie ("Lord, have mercy on us," st. 2), and changed the character of the hymn from a battle song into a more general lament and prayer for peace. The resulting text is a prayer similar to the penitential psalms (especially Ps. 51), which usually include a cry for help, healing, or peace (st. 1); confession of sin (st. 2); a prayer for purity or cleansing (st. 3); and a prayer for God's glory or victory (st. 4). For further commentary on the penitential psalms, see PHH 6, 32, 38, 51,102,130, and 143.

Zwingli (b. Wildhaus, Switzerland, 1484; d. Kappel, Switzerland, 1531) was ordained a priest in the Roman Catholic Church after study in Vienna and Basel. He served briefly as a chaplain in the Swiss army and in 1518 became priest of the Great Church in Zurich, a position he retained for the rest of his life. Zwingli's rift with Rome was a gradual process. Influenced more by Erasmus than by Luther, he first began preaching against some of the abuses in the church and then developed his own theological views based on Scripture and the writings of the Church Fathers. By 1519 he was preaching against purgatory and praying to the saints. In 1522 he advocated freedom from the papacy and caused the Zurich church to abolish the Mass in 1525. Eventually the break with Rome was complete–the Zurich church and several of the other cantons became Protestant. However, some of the Swiss cantons remained loyal to Rome, and a military struggle ensued–the Forest Cantons attacked the Zurich forces. In the battle at Kappel the Zurich army was routed, and Zwingli, the banner-bearing chaplain, was killed.

In matters of worship Zwingli is of interest especially on two issues. He disagreed with both Calvin and Luther as far as the Lord's Supper was concerned, believing it to be strictly a memorial meal rather than a means of grace. However, in his later writings he acknowledges the "spiritual presence" of Christ in the Supper. His view on church music also set him apart from the other reformers. Zwingli was a fine singer, instrumentalist, and composer. He encouraged singing in his home, but he came to the conclusion that singing during public worship was not appropriate. He banned not only choral and instrumental music but congregational singing as well, believing that the emphasis in the liturgy ought to be on silent, spiritual worship. For Zwingli, music was largely a physical activity with great psychological power, which would distract from spiritual worship.

Liturgical Use:
Service of confession and forgiveness, as with the penitential psalms; as a prayer for deliverance and for peace.

AUS DER TIEFE (also called HEINLEIN) was published in the Nürnbergisches Gesang-Buch (1676-77) as a setting for Christoph Schwamlein's text based on Psalm 130 "Aus der Tiefe rufe ich" ("Out of the Depths I Cry"). In that songbook the tune was attributed to "M. H.," initials that are generally acce…

Zwingli arranged HERR, NUN HEB from a folk melody; thus it is a contrafactum (in other words, adapted from a folk/ court setting for use in worship). The tune is named after the opening words of Zwingli's text. HERR, NUN HEB consists of four lines: lines 2 and 3 are identical, but the opening and cl…

All tunes published with 'Lord, We Cry to You for Help'^ top