Not in anger, Mighty God

Not in anger, Mighty God

1 Not in anger, mighty God,
Not in anger smite us.
We must perish if Thy rod
Justly should requite us.
We are naught;
Sin hath brought,
Lord, Thy wrath upon us.
Yet have mercy on us!


2 Show me now a Father's love
And His tender patience.
Heal my wounded soul; remove
These too sore temptations.
I am weak;
Father, speak
Thou of peace and gladness;
Comfort Thou my sadness.


3 Weary am I of my pain,
Weary with my sorrow,
Sighing still for help in vain,
Longing for the morrow.
Why wilt Thou
Tarry now!
Wilt Thou friendless leave me
And of hope bereave me?


4 Hence ye foes, He comes in grace;
God hath deigned to hear me.
I may come before His face,
He is inly near me.
He o'erthrows
All my foes,
Death and hell are vanquished
In whose bonds I languished.


5 Father, hymns to Thee we raise
Here and once in heaven,
And the Son and Spirit praise,
Who our bonds have riven.
Evermore
We adore
Thee whose love hath stirred us
And whose pity heard us.

This, if correct, would date it about 1655, and Koch, iii. 398, says it was printed separately in that year; The earliest hymn-book in which it is found is Luppius's Andachtig Singender Christen Mund, Wesel., 1692, p. 20. It is a beautiful hymn of Penitence (by Miss Winkworth assigned to Ash Wednesday). Included as No. 273 in Freylinghausen's Gesang-Buch, 1704, and recently as No. 535 in the Berlin Geistliche Liedersegen, ed. 1863, in 7 stanzas of 8 lines. The translations in common use are:—

All tunes published with 'Not in anger, Mighty God'^ top 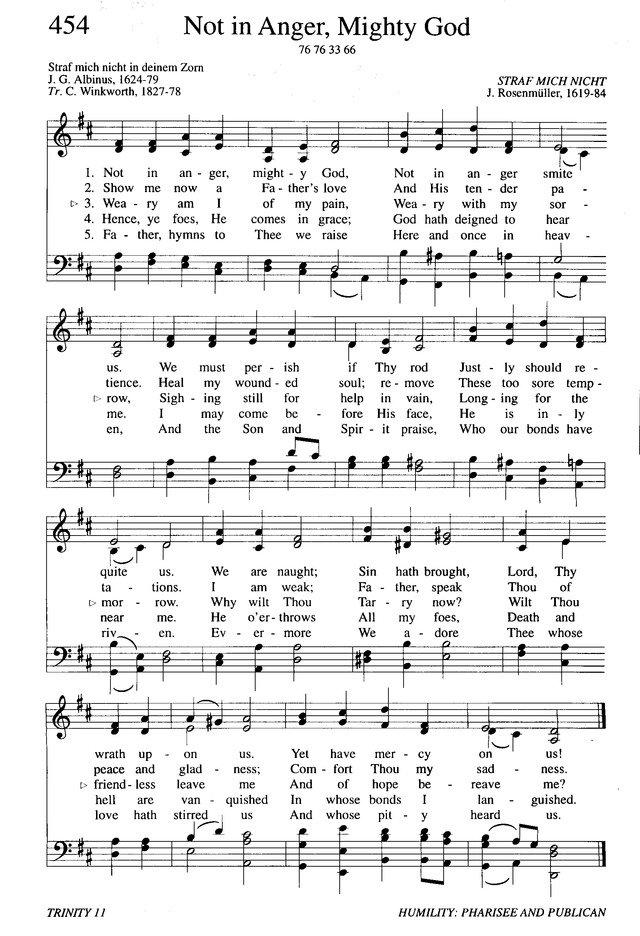