Now let us pray to God the Holy Ghost 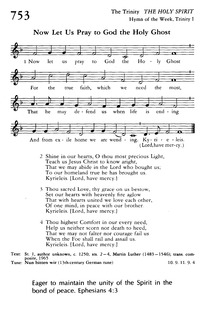 Now let us pray to God the Holy Ghost

1 Now let us pray to God the Holy Ghost
For the true faith, which we need the most,
That he may defend us when life is ending
And from exile home we are wending.
Kyrieleis. (Lord, have mercy.)


2 Shine in our hearts, O thou most precious Light,
Teach us Jesus Christ to know aright,
That we may abide in the Lord who bought us;
To our homeland true he has brought us.
Kyrieleis. (Lord, have mercy.)


3 Thou sacred Love, thy grace on us bestow,
Set our hearts with heavenly fire aglow
That with hearts united we love each other,
Of one mind, in peace with our brother.
Kyrieleis. (Lord, have mercy.)


4 Thou highest Comfort in our every need,
Help us neither scorn nor death to heed,
That we may not falter nor courage fail us
When the Foe shall rail and assail us.
Kyrieleis. (Lord, have mercy.)

Nu biten wir den heiligen Geist. [Whitsuntide.] Wackernagel, ii. p. 44, gives two versions, both in 5 lines; the one from a manuscript sermon [now at Heidelberg] of "Bruder Bertholt von Regensburg," who d. 1272, and the other from the Psaltes Ecclesiasticus, Mainz, 1550. It is one of the very few examples of popular vernacular hymns used in church in pre-Reformation times. According to Koch, i. p. 208, it was sung at Whitsuntide by the people "during the ceremony in which a wooden dove was lowered by a cord from the roof of the chancel, or a living dove was thence let fly down." It was adopted by Martin Luther. (See Nun bitten, as below.) Translated as "Now let us pray the Holy Ghost," by Miss Winkworth, 1869, p. 38. [Rev. James Mearns, M.A.] 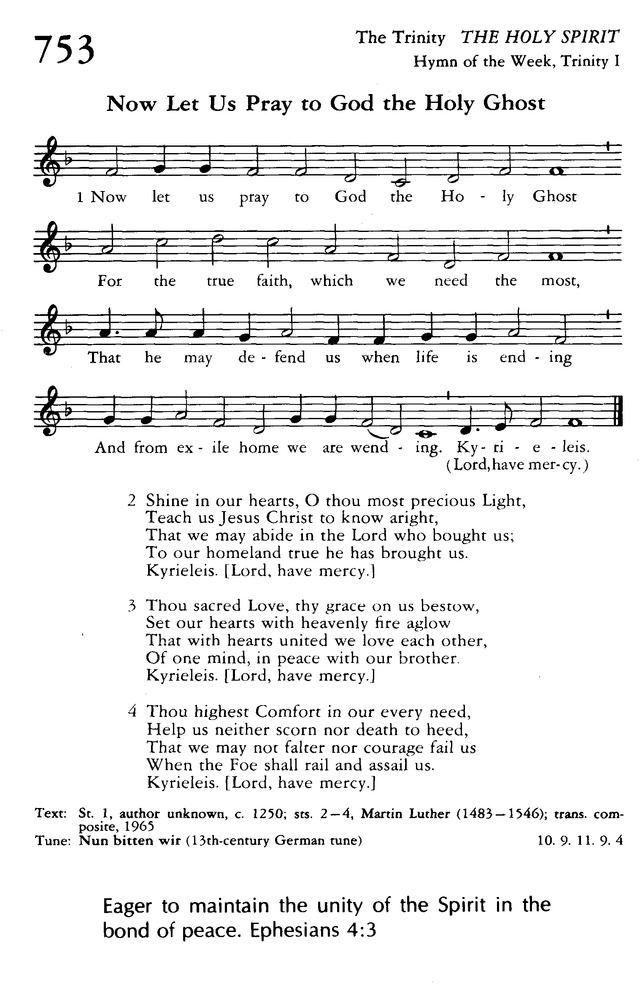