O God, My Strength and Fortitude 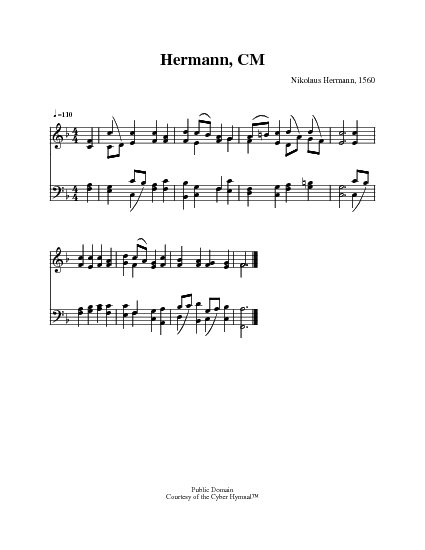 O God, my strength and fortitude

1 O God, my strength and fortitude,
of force I must love thee;
thou art my castle and defense
in my necessity.


2 When I sing praise unto the Lord,
most worthy to be served,
then from my foes I am right sure
that I shall be preserved.


3 The Lord shall light my candle so
that it shall shine full bright:
the Lord my God will make also
my darkness to be light.


4 Unspotted are the ways of God;
his Word is purely tried;
he is a sure defense to such
as in his faith abide.


5 Now blessed be the living God,
most worthy of all praise;
he is my rock and saving health:
so praised be he always.

Source: Rejoice in the Lord #86

Thomas Sternhold was Groom of the Robes to Henry VIII and Edward VI. With Hopkins, he produced the first English version of the Psalms before alluded to. He completed fifty-one; Hopkins and others composed the remainder. He died in 1549. Thirty-seven of his psalms were edited and published after his death, by his friend Hopkins. The work is entitled "All such Psalms of David as Thomas Sternhold, late Groome of the King's Majestye's Robes, did in his Lyfetime drawe into Englyshe Metre." Of the version annexed to the Prayer Book, Montgomery says: "The merit of faithful adherence to the original has been claimed for this version, and need not to be denied, but it is the resemblance which the dead bear to the living." Wood, in his "Athe… Go to person page >
^ top

O God, my strength and fortitude. T. Sternhold. [Ps. xviii.] This version of the xviiith Psalm appeared in the Old Version, 1561, and was repeated in all the subsequent editions of the Old Version. In the older hymn-books a cento therefrom was in somewhat extensive use in Great Britain and America. It began,

“The Lord descended from above
And bow'd the heavens high:
And underneath His feet he cast
The darkness of the sky,"

and consisted of stanzas ix., x. and i., in the order named. In some collections the second line reads "And bow'd the heavens most high," and an additional stanza is placed between sts. ii. and iii., as "He sat serene upon the floods," an altered form of Sternhold's version of Ps. xxix. 10.

ST. MAGNUS first appeared in Henry Playford's Divine Companion (1707 ed.) as an anonymous tune with soprano and bass parts. The tune was later credited to Jeremiah Clark (b. London, England, c. 1670; d. London, 1707), who was a chorister in the Chapel Royal and sang at the coronation of James II in…

SONG 67 was published as a setting for Psalm 1 in Edmund Prys's Welsh Llyfr y Psalmau (1621). Erik Routley (PHH 31) suggests that the tune should be ascribed to Prys. Orlando Gibbons (PHH 167) supplied a new bass line for the melody when it was published with a number of his own tunes in George With…

All tunes published with 'O God, My Strength and Fortitude'^ top 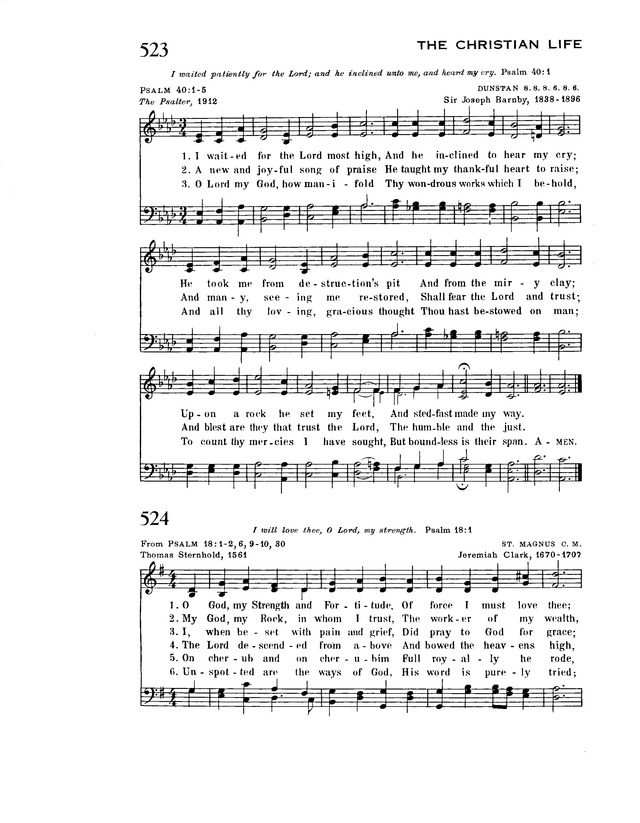