The Head That Once Was Crowned With Thorns

ST. MAGNUS first appeared in Henry Playford's Divine Companion (1707 ed.) as an anonymous tune with soprano and bass parts. The tune was later credited to Jeremiah Clark (b. London, England, c. 1670; d. London, 1707), who was a chorister in the Chapel Royal and sang at the coronation of James II in 1685. Later he served as organist in Winchester College, St. Paul's Cathedral, and the Chapel Royal. He shot himself to death in a fit of depression, apparently because of an unhappy romance. Supported by Queen Anne, Clark was a prominent composer in his day, writing songs for the stage as well as anthems, psalm tunes, and harpsichord works. One well-known piece, the Trumpet Voluntary, was long attributed to his contemporary Henry Purcell (PHH 612) but is now recognized as Clark's composition. Robert Bridges (PHH 386) and Ralph Vaughan Williams (PHH 316) reintroduced Clark's hymn tunes for congregational use in the twentieth century in the Yattendon Hymnal (1899) and The English Hymnal (1906).
Although ST. MAGNUS was originally used as a setting for Psalm 117, it has been associated with this text since they were combined in the 1868 Appendix to Hymns Ancient and Modern. The tune is named for the Church of St. Magnus the Martyr, built by Christopher Wren in 1676 on Lower Thames Street near the old London Bridge, England.

ST. MAGNUS consists of two long lines, each of which has its own sense of climax. The octave leap in the final phrase has a stunning effect, like a vault in a Gothic cathedral. Assign stanzas for antiphonal singing in unison and/ or in harmony. Organ accompaniment should be lively, with full, bright registration.

Text: Afflictions, Though They Seem Severe

Text: How Hurtful Was the Choice of Lot

Text: The Head That Once Was Crowned

Text: In All My Vast Concerns with Thee

Text: O Thou Whose Feet Have Climbed Life's Hill

Text: O Will of God Beneath Our Life

Text: The Head That Once Was Crowned with Thorns

Text: The Head That Once Was Crowned

Text: The Head That Once Was Crowned
^ top 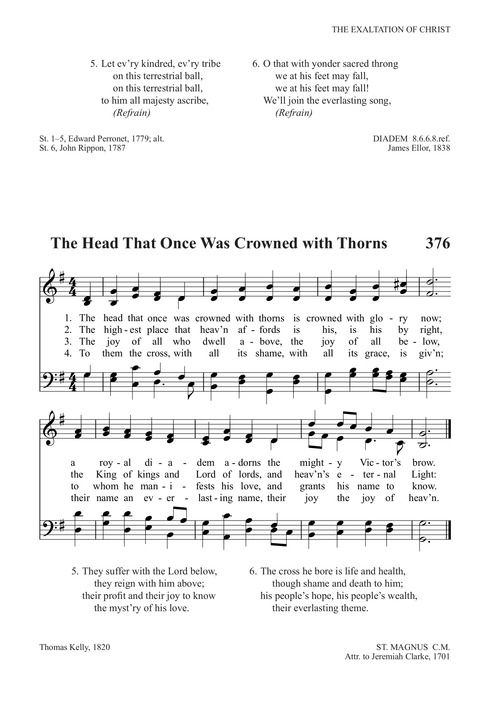 A New Hymnal for Colleges and Schools #569

Tune Title: St. Magnus First Line: The head that once was crowned with thorns Date: 1992
A New Hymnal for Colleges and Schools #569

Hymns of Glory, Songs of Praise #61

Hymns of Glory, Songs of Praise #290a

Psalms for All Seasons #90A

Tune Title: ST. MAGNUS First Line: The head that once was crowned with thorns Date: 2006
The Christian Life Hymnal #202

Tune Title: ST. MAGNUS First Line: I know not how that Bethl'hem's Babe could in the Godhead be Date: 2006
The Christian Life Hymnal #527