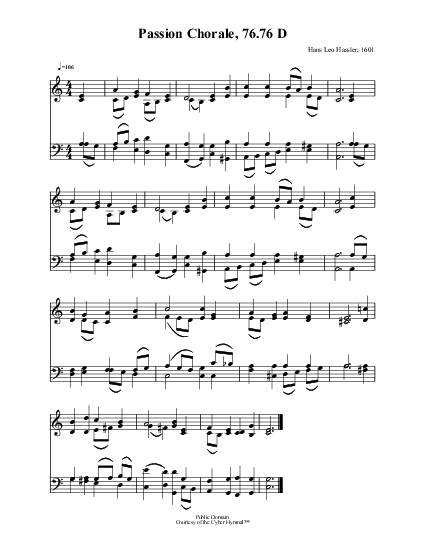 Suggested tune: PASSION CHORALE (HERZLICH TUT MICH VERLANGEN)
======================
O Haupt voll Blut und Wunden. P. Gerhardt. [Passiontide.] This is a beautiful but free tr. of the "Salve caput cruentatum," which is pt vii. of the Rhythmica Oratio, ascribed to St. Bernard of Clairvaux. Gerhardt's version appeared as No. 156 in the Frankfurt edition, 1656, of Crüger's Praxis, in 10 stanzas of 8 lines, entitled, "To the suffering Face of Jesus Christ." It is repeated in Wackernagel's edition of Gerhardt's Geistlische Lieder, No. 22; Bachmann's edition, No. 54 ; the Unverfälschter Liedersegen, 1851, No. 109; and almost all recent German hymn-books. Lauxmann in Koch, viii., 47, thus characterises it:—

"Bernard's original is powerful and searching, but Gerhardt's hymn is still more powerful and more profound, as redrawn from the deeper spring of evangelical Lutheran, Scriptural, knowledge, and fervency of faith." Stanza x. Lauxmann would trace not only to Bernard but to stanza iii. of "Valet will ich dir geben " (see Herberger); and to Luther's words on the death of his daughter Magdalen " Who dies thus, dies well." He adds many instances of its use. Thus A. G. Spangenberg, when on the celebration of his jubilee he received many flattering testimonies, replied in humility with the words of stanza iv. In 1798, while C. F. Schwartz lay a-dying, his Malabar pupils gathered round him and sang in their own language the last verses of this hymn, he himself joining till his breath failed in death.

"This classical hymn has shown an imperishable vitality in passing from the Latin into the German, and from the German into the English, and proclaiming in three tongues, and in the name of three Confessions— the Catholic, the Lutheran, and the Reformed—with equal effect, the dying love of our Saviour, and our boundless indebtedness to Him."

O Haupt voll Blut, p. 835, i. The version by Dr. Alexander, "O Sacred Head! now wounded," appears, with alterations made by the compilers, in the S.P.C.K. Church Hymns, 1903, No. 141, as "O Sacred head! sore wounded, With grief and shame weighed down." The fourth stanza would give the spirit of the original better if it read thus:—

"Be near when I am dying;
Oh! show Thy Cross to me;
Thy death, my hope supplying,
From fear shall set me free." 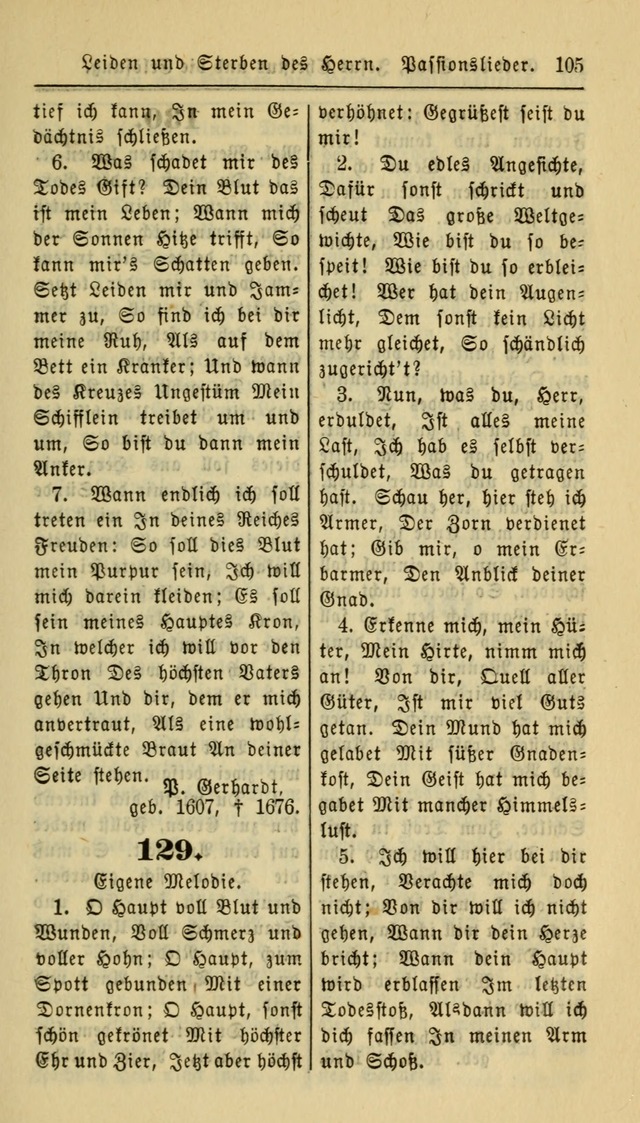