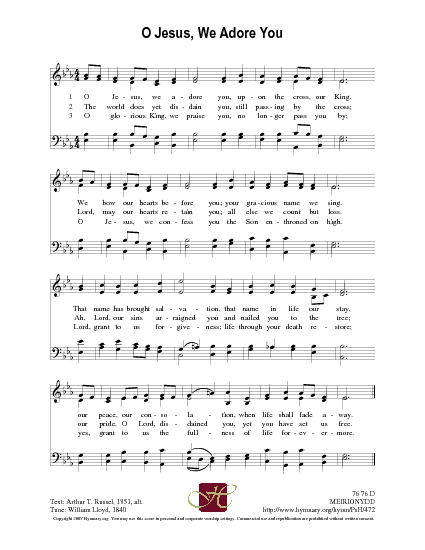 O Jesus, we adore Thee, Upon the cross our King

1 O Jesus, we adore thee,
upon the cross, our King!
We bow our hearts before thee,
thy gracious name we sing.
That name hath brought salvation,
that name in life our stay,
our peace, our consolation,
when life shall fade away.


2 Yet doth the world disdain thee,
still passing by the cross;
Lord, may our hearts retain thee;
all else we count but loss.
Ah, Lord, our sins arraigned thee,
and nailed thee to the tree:
our pride, our Lord, disdained thee;
yet deign our hope to be.


3 O glorious King, we bless thee,
no longer pass thee by;
O Jesus, we confess thee,
the Son enthroned on high.
Lord, grant to us remission;
life through thy death restore;
yea, grant us the fruition
of life forevermore.

Arthur Tozer Russell was born at Northampton, March 20, 1806. He entered S. John's College, Cambridge, in 1824, took the Hulsean Prize in 1825, and was afterwards elected to a scholarship. He was ordained Deacon in 1829, Priest in 1830, and the same year was appointed Vicar of Caxton. In 1852, he was preferred to the vicarage of Whaddon. In 1863, he removed to S. Thomas', Toxteth Park, near Liverpool, and in 1867, to Holy Trinity, Wellington, Salop. He is the editor and author of numerous publications, among them several volumes of hymns. --Annotations of the Hymnal, Charles Hutchins, 1872.… Go to person page >
^ top

Written by Arthur T. Russell (b. Northampton, England, 1806; d. Southwick, Brighton, England, 1874), this text focuses on the redemptive work of Christ on the cross, which means, as one Lord's Supper formulary describes it, "that he was condemned to die that we might be pardoned, that he endured the suffering and death of the cross that we might live through him, and that he was once forsaken by God that we might forever be accepted by him" (979).

As we sing this hymn, we praise Christ for his saving work (st. 1), confess our sinfulness which "nailed [Christ] to the tree" (st. 2), and pray for the completion of our redemption in life everlasting (st. 3). The phrase "pass by" in stanzas 2 and 3 comes from Lamentations 1:12, a passage that is often used liturgically in conjunction with the gospel narratives of Christ's passion.

Although Russell's family name was originally Clout, his father changed it to Russell. Educated at Manchester College, York, and St. John's College, Cambridge, Russell was ordained in the Church of England in 1829 and served parishes in Hunts, Caxton, Whaddon, and Wrockwardine Wood. His theology was influenced by Augustine, and he changed from a very high-church to a moderate-Calvinist perspective. His new views came to expression when he wrote several articles against proponents of the Oxford Movement, who wanted the Church of England to move closer to Roman Catholicism. A prolific writer on theological and biographical topics, Russell also wrote 140 hymns and 150 hymn translations and composed some hymn tunes. He compiled a number of hymnals, such as Hymn Tunes, Original and Selected (c. 1840), Hymns far Public Worship (1848), and Psalms and Hymns(1851), a book that included many of his translations of German hymns and also "O Jesus, We Adore Thee."

Liturgical Use:
Holy Week; Lent; worship that focuses on the doctrine of redemption (Lord's Day 23 of the Heidelberg Catechism).

William Lloyd (b. Rhos Goch, Llaniestyn, Caernarvonshire, Wales, 1786; d. Caernarvonshire, 1852) composed MEIRIONYDD, which was first published in manuscript form with the name BERTH in Caniadau Seion (Songs of Zion, 1840, ed. R. Mills). The tune is named after the Welsh county Meirionydd in which L…

All tunes published with 'O Jesus, We Adore Thee'^ top 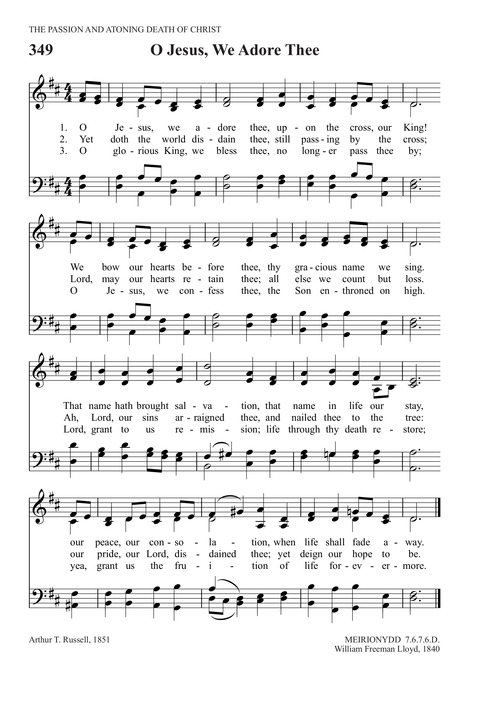