William Lloyd, a Welsh musician and music teacher, born at Rhos-goch , Llaniestyn , Llŷn , in 1786; died, according to his tombstone in Llaniestyn churchyard, on 7 June 1852 , aged 66. He is most known for his tune MEIRIONYDD. It was published under the name "BERTH" in Caniadaeth Seion ( 1840 ) published by Richard Mills. Dianne Shapiro, from Dictionary of Welsh Biography, accessed 11-8-2018 from http://wbo.llgc.org.uk Go to person page >
^ top

The Voice of God Is Calling

All texts published with MEIRIONYDD^ top

William Lloyd (b. Rhos Goch, Llaniestyn, Caernarvonshire, Wales, 1786; d. Caernarvonshire, 1852) composed MEIRIONYDD, which was first published in manuscript form with the name BERTH in Caniadau Seion (Songs of Zion, 1840, ed. R. Mills). The tune is named after the Welsh county Meirionydd in which Lloyd lived; that county is also the site of the Harlech Castle made famous in story and song. A cattle farmer and dealer, Lloyd was also a self-taught musician. He had a fine voice and conducted various singing societies in his hometown as well as in other cities.

Although generally attributed to Lloyd, MEIRIONYDD could be a traditional Welsh melody that he arranged. Shaped in bar form (AABC), the tune is set in sturdy rhythms and harmonies for choral singing. Compared to the typical triadic outlines in Welsh melodies, this tune is more stepwise. Sing it rather boldly, in balance with the tone of the text. A higher setting is found at 472.

Text: Pray When the Morn Is Breaking

Text: The Voice of God Is Calling

Text: There Where the Judges Gather

Text: O Jesus, We Adore You

Text: The Voice of God is Calling
^ top 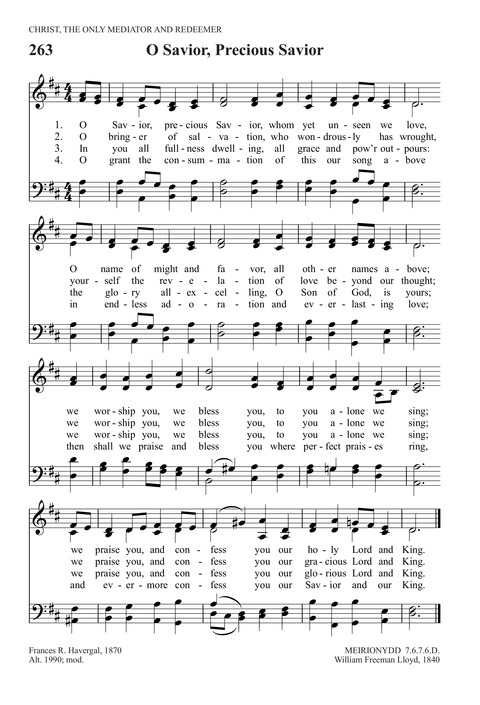 Psalms for All Seasons #82A