1 O little town of Bethlehem,
how still we see thee lie!
Above thy deep and dreamless sleep
the silent stars go by;
yet in thy dark streets shineth
the everlasting light.
The hopes and fears of all the years
are met in thee tonight.


2 For Christ is born of Mary,
and, gathered all above
while mortals sleep, the angels keep
their watch of wond’ring love.
O morning stars, together
proclaim the holy birth,
and praises sing to God the King
and peace to all the earth.


3 How silently, how silently,
the wondrous gift is giv’n!
So God imparts to human hearts
the blessings of his heav’n.
No ear may hear his coming,
but in this world of sin,
where meek souls will receive him, still
the dear Christ enters in.


4 O holy Child of Bethlehem,
descend to us, we pray,
cast out our sin and enter in,
be born in us today.
We hear the Christmas angels
the great glad tidings tell;
O come to us, abide with us,
our Lord Immanuel! 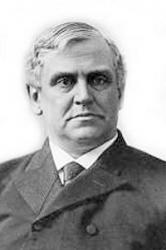 All tunes published with 'O little town of Bethlehem'^ top

In 1865, the year the Civil War ended and President Lincoln was assassinated, themes of peace and quiet would probably have been welcome to Americans. In that year, the Rev. Phillips Brooks took a trip to Israel and saw Bethlehem and its surrounding fields on Christmas Eve, which eventually inspired him to write this Christmas hymn. In contrast to some other Christmas hymns that emphasize the glory of God as seen in the grand chorus of angels, Brooks focuses on the quietness of Christ’s birth, and how little the larger world paid attention. The final stanza is a prayer that Christ would come and be present with us.

In 1865, Phillips Brooks spent some time in Israel, and was in Bethlehem for Christmas. He rode on horseback through the fields around Bethlehem, and attended the Church of the Nativity on Christmas Eve. At that time, Brooks was rector of Holy Trinity Episcopal Church in Philadelphia. This hymn was probably inspired by this journey, but Brooks did not complete the hymn until 1868. That year, he commissioned a tune for it from his church organist so that it could be sung at the Sunday school service at his church for Christmas on December 27, 1868. It was originally written in five stanzas, but the fourth is usually omitted.

The hymn focuses on the relative silence of the birth of Christ – Bethlehem was just a little town, and only a few people paid attention to the event. The heraldic chorus of angels is minimized in the lines

“While mortals sleep, the angels keep Their watch of wondering love.”

The final stanza is a prayer that Christ would come and transform our lives.

There are two tunes in common use with this text, and some hymnals include both. ST. LOUIS was commissioned by Brooks for the text in 1868 from the organist for Holy Trinity Episcopal Church, Lewis Redner. Redner delayed composing the tune until the night before it was to be sung for the first time, on December 27, 1868. He later wrote, “Neither Mr. Brooks nor I ever thought the carol or the music to it would live beyond that Christmas of 1868.” However, this tune and text pairing has lasted over one hundred forty years, and is one of the best-loved American Christmas hymns. Though the origin of the name of the tune is unclear, it was probably named after the composer by the publisher of The Church Porch of 1874, where this hymn was first published (with “Lewis” altered to “Louis”).

The other tune, FOREST GREEN is an English folk tune transcribed and arranged by Ralph Vaughan Williams in 1903. It first appeared in the English Hymnal in 1906 with this text. It was originally named “The Ploughboy’s Dream,” but Vaughan Williams named it after the village of Forest Green in Surrey, where he first heard it. This tune is more common in the UK.

This hymn is suitable for the Advent and Christmas seasons. It was originally written for children, but is used by Christians of all ages. The peaceful mood of the tune ST. LOUIS may be used to introduce or conclude a time of silent prayer. “O Little Town of Bethlehem” is an arrangement for choir and piano accompaniment with varying choral textures. “Christmas Carol Fest III” contains a handbell arrangement that can be used as an instrumental piece or to accompany singing. “O Come to the Manger” combines this hymn set to FOREST GREEN with the German children's carol, “O Come, Little Children,” employing men's voices and a children's choir with piano and flute accompaniment. Either tune may be used in a festive arrangement, such as “Hymn Introductions and Descants for Trumpet and Organ – Set 3,” which contains a setting of FOREST GREEN. 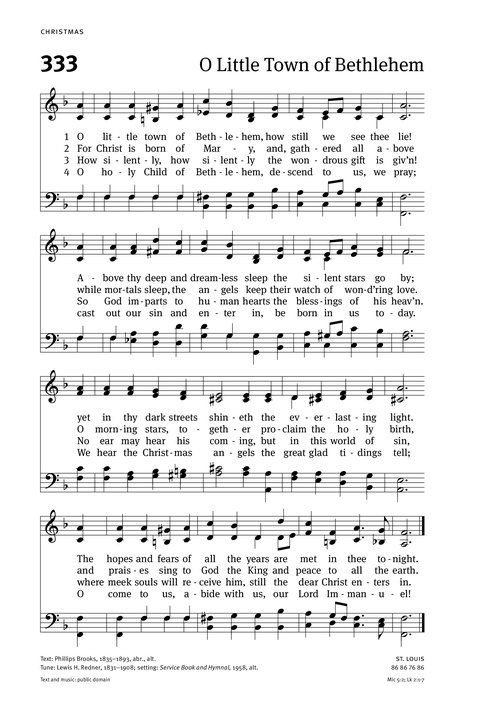 Great Songs of the Church (Revised) #193

Hymns for a Pilgrim People #111

Hymns for a Pilgrim People #112

Hymns of the Christian Life #64

The Hymnal for Worship and Celebration #141

Include 675 pre-1979 instances
All instances^ top
Suggestions or corrections? Contact us