Joy to the world! the Lord is come!

Joy to the world! the Lord is come!

Isaac Watts (PHH 155) wrote this text as a paraphrase of Psalm 98. He published it in his Psalms of David Imitated (1719) under the heading “The Messiah's Coming and Kingdom.” The paraphrase is Watts' Christological interpretation.

Consequently, he does not emphasize with equal weight the various themes of Psalm 98. In stanzas 1 and 2 Watts writes of heaven and earth rejoicing at the coming of the king. An interlude that depends more on Watts' interpretation than the psalm text, stanza 3 speaks of Christ's blessings extending victoriously over the realm of sin. The cheerful repetition of the non-psalm phrase "far as the curse is found" has caused this stanza to be omitted from some hymnals. But the line makes joyful sense when understood from the New Testament eyes through which Watts interprets the psalm. Stanza 4 celebrates Christ's rule over the nations.

Liturgical Use
Christmas Day, but also at any other time of year in relation to Psalm 98. Raised eyebrows at singing "Joy to the World!" in July will lower as soon as the relationship to Psalm 98 becomes clear.

--Psalter Hymnal Handbook
================
Joy to the world, the Lord is come [nigh]. I. Watts. [Ps. xcviii.] First published in his Psalms of David, &c, 1719, in 4 stanzas of 4 lines, as the 2nd pt. of his version of Psalm 98. T. Cotterill gave, in the first edition of his Selection, 1810, a much altered version of text, which was repeated in the authorized edition of 1820 with the repetition of stanza i. as stanza v. This arrangement is known by st. ii., which reads, "Ye saints, rejoice, the Saviour reigns," &c. Bickersteth's arrangement in his Christian Psalmody, 1833, also in 5 stanzas; but the added stanza (iii.) is from Watts's version of the first part of the same Psalm. Both of these texts have been repeated in later collections. In addition there are also the following: (1) "The Lord is come; let heaven rejoice," in Hall's Mitre Hymn Book, 1836; and (2) "Joy to the world, the Lord is nigh," in the Irvingite Hymns for the Use of the Churches, 1864. In its various forms, but principally in the original, it is in use in most English-speaking countries. It has also been translated into several languages, including Latin, in E. Bingham's Hymnologia Christiana Latina, 1870, "Laetitia in mundo! Dominus nam venit Iesus!"

All tunes published with 'Joy to the world! the Lord is come!'^ top

In Genesis 3, one of the great tragedies in all of Scripture occurs. Adam and Eve sin against God, and are banished from the garden as God puts a curse upon the ground. It is a heartbreaking rupture in God’s perfect creation, and it is hard not to read this text without feeling a twinge of despair. And yet, before the curse comes a promise. God declares that the woman shall bear offspring that will crush the head of the serpent. Jesus, the Son of Man and Son of God, will come to break the curse, to renew the creation, to make whole what is now broken.

In Psalm 98, all of creation is called upon to make a joyful noise before God, for the Lord has come to “judge the earth,” and restore His Creation. We should not fail to see our own hand at work in the destruction of creation, in our sins of waste and decadence. This “judgment of the earth” is, in some part, a judgment of us as caretakers. But God is merciful and full of grace, and rather than leave everything in our hands, He gives us the Life-giver. In this beautiful hymn, Isaac Watts makes the connection between the coming of Christ into this world and the beginning of that restoration. Christ brings “joy to the world,” a light where there is darkness, growth where there is decay. And we, along with all Creation, respond with a song of praise.

Surprisingly, this hymn was not written for Christmas. Rather, Isaac Watts wrote the hymn as a paraphrase of the last five verses in Psalm 98 for his 1719 publication, The Psalms of David Imitated. In this hymnal, Watts rewrites many of the psalms using a Christological lens. His versification of Psalm 98 is no different. Verse nine of the psalm reads, “…let them sing before the LORD, for he comes to judge the earth. He will judge the world in righteousness and the peoples with equity.” Watts unapologetically interprets this as a reference to Christ. The theme of “Christ coming” made it an apt hymn to be sung at Christmastime, and it has since become one of the most beloved Christmas carols.

Albert Bailey writes, “It is one of the most joyous Christmas hymns in existence; not in the sense of merry-making but in the deep and solemn realization of what Christ’s birth has meant to mankind” (The Gospel in Hymns, 54). Watt’s text has almost been left untouched by editors, with one exception. The line “far as the curse is found” is left out of many hymnals, since there is no reference to this “curse” in the actual psalm. However, when seen through the eyes of the New Testament and Gospel message, the reference to Genesis 3:17-18 becomes quite clear.

There are multiple theories as to where this melody came from. Some believe that Lowell Mason was the arranger; others believe he only changed four notes of an existing tune. What is quite clear, however, is that the tune, ANTIOCH, is derived from various melodies found within Handel’s Messiah. The opening phrase sounds like “Glory to God,” and the last four measures, with the text “heaven and nature sing,” sound like the beginning of “Comfort ye my people.” The tune is thus often attributed to Handel, with Mason as the arranger and combiner of text and tune.

This joyful hymn is always a favorite on Christmas day. It could be sung at the beginning of the service as an announcement of the birth, or nearer the end - a final hymn of praise in which we express the joy that has built up throughout our worship. It could also be sung as a hymn of assurance after a time of confession of how we have failed to take care of God’s creation. If you really want to mix things up, try singing the hymn during a service themed around Creation, rather than at Christmastime. Just be sure to make the connection to Psalm 98 clear!

Harmonia Americana: containing a concise introduction to the grounds of music; with a variety of airs, suitable fore divine worship and the use of musical societies; consisting of three and four parts #87 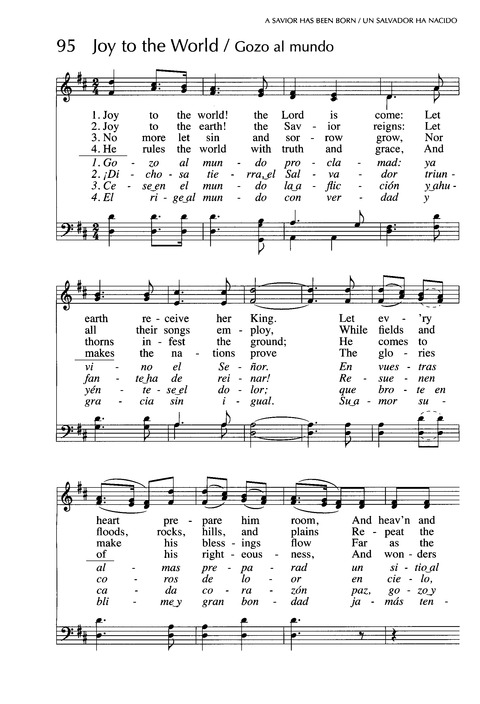 Hymns for a Pilgrim People #107

Psalms for All Seasons #98D

The Christian Harmony #62B

Display Title: Joy To The World First Line: Joy to the world – the Lord is come! Tune Title: JOY TO THE WORLD Date: 2010
The Christian Harmony #62B

Display Title: Joy to the World First Line: Joy to the world, the Lord is come Tune Title: ANTIOCH Author: Isaac Watts Source: The Psalms of David, 1719
The Cyber Hymnal #3419

Display Title: Joy to the World First Line: Joy to the world, the Lord is come! Date: 2012
The Family Hymnal #41

The Hymnal for Worship and Celebration #125

The Song Book of the Salvation Army #84

The United Methodist Hymnal #818b

Include 1625 pre-1979 instances
All instances^ top
Suggestions or corrections? Contact us