O render thanks and bless the Lord; Invoke his sacred name (Tate and Brady) 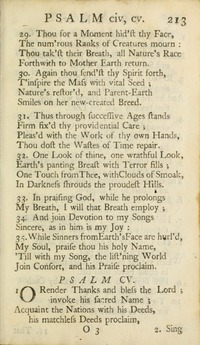 O render thanks and bless the Lord; Invoke his sacred name (Tate and Brady)

1 O render thanks and bless the Lord,
Invoke his sacred name;
Acquaint the nations with his deeds,
His great and matchless deeds proclaim:
His wond'rous works in hymns rehearse,
Make them the subject of your verse.


2 Rejoice in his almighty name,
Which only ought to be ador'd;
And let their hearts o'erflow with joy,
Who seek with humble fear the Lord:
Seek ye the Lord, his strength implore,
Seek ye his face for evermore.


3 The wonders which his hands have wrought,
Keep ever thankfully in mind;
With all the statutes of his mouth,
And Laws he hath to us assign'd:
His works are glorious to the view,
His judgments all are just and treu.


4 Know ye, his servant Abr'am's seed
And likewise Jacob's chosen race;
He's still our God, and through the earth,
His righteous judgments will take place:
His word, for thousand ages past,
Which yet for thousand Ages more,
Hath stood and shall for ever last.


5 His cov'nant first to Abra'am sign'd
By oath to Isaac made secure;
To Jacob, and his heirs, confirm'd,
A law for ever to endure:
A Testament to Israel made,
Is on a firm foundation laid.


6 That Canaan's land should be their lot,
When yet but few of them they were;
But few in number, and those few,
Forlorn and helpless strangers there:
From realm t realm secure they mov'd,
Whilst kings were for their sakes reprov'd.


7 "These mine anointed are (said he)
"let none my chose servants wrong;
"Nor treat the poorest prophet ill
"That doth to me , his God, belong:"
At last he made their corn to fail,
And through the land a dearth prevail.


8 But Joseph he had sent before,
Who for a slave was sold and bound;
His feet, secur'd within the stocks,
'Till God's appointed time and word,
Had try'd him, and did help afford.


9 The king then sent, and set him free,
And lord of all his houshold made;
His wealth he gave to him in charge,
Before him all his counsels laid;
That he might teach his statesmen skill,
And tell the princes of his will.


10 To Egypt then, invited guests,
With speed half-famish'd Isr'el came;
And Jacob, though a stranger, held
By royal grant the land of Ham:
There God his people multiply'd,
'Till they with their oppressors vy'd.


11 Their vast increase th' Egyptian hearts
With jealousy and anger fir'd;
'Till they, his servants to destroy,
With secret treachery conspir'd:
Their hearts against his people turn'd,
Their breasts with inward envy burn'd.


12 His servant Moses then he sent,
He sent his chosen Aaron too;
Empower'd with signs and miracles,
To prove their sacred mission true:
These shew'd the wonders of his hand,
And spread their tokens through the land.


13 He call'd for darkness, and it came,
Yet would they not his voice obey;
He turn'd their waters into blood,
And did their fish in numbers slay:
A noisome pest of frogs was bred,
And sent to croak at Pharaoh's bed.


14 He gave the sign, and swarms of flies,
Came from above in cloudy hosts;
While earth's enlivin'd dust below,
Bred hateful lice through all their coasts:
Hail stones he did for rain command,
And flames of fire, to plague the land.


15 He smote their fig trees and their vines,
Their lofty forest trees destroy'd;
Locus and caterpillars join'd
In dreadful swarms, the land annoy'd:
Their numbers cover'd all the ground,
And eat the fruit and herbage round.


16 He, in one night their first born smote,
The chief of all their pride he slew;
Bur from their land, enrich'd with spoils,
In health and strength his servants drew:
Egypt ws glad when they remov'd,
Who had to them so fatal proved.


17 God spread a cloud to cover them,
A fire at night was their sure guide;
He gave them quails at their desire,
And them with heav'nly bread supply'd:
He smote the rock, and from the wound,
The gushing waters flow'd around.


18 For he his promise kept in mind,
And brought his people forth with joy;
Gave them the fruit of others toil,
And did their heathen foes destroy:
That they his statutes might obey,
And to his laws due rev'rence pay.

Source: The Psalms of David: with hymns and spiritual songs: also, the catechism, confession of faith, and liturgy of the Reformed Church in the Netherlands #105

All tunes published with 'O render thanks and bless the Lord; Invoke his sacred name (Tate and Brady)'^ top 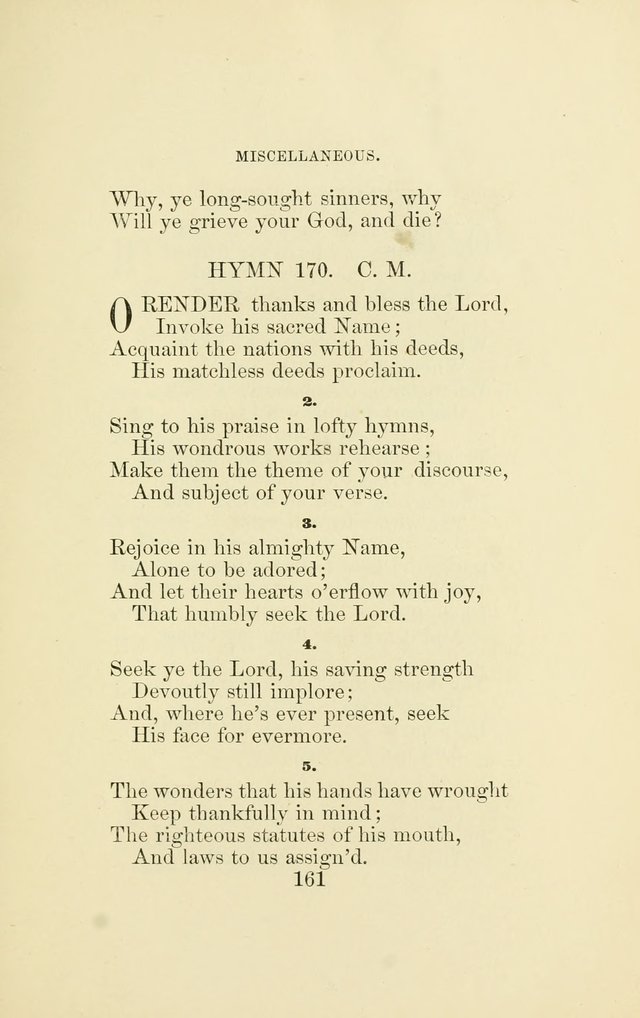 View Page
Hymns Recommended for use in the Reformed Episcopal Church (1874), p.168
^ top

A Collection of Psalms and Hymns for Publick Worship #P.CV

A Collection of Psalms and Hymns for Publick Worship (2nd ed.) #P.CV

A Collection of Psalms, Hymns, and Spiritual Songs #167

A New Version of the Psalms of David #CV

A New Version of the Psalms of David #213

A Selection of Psalms and Hymns for Every Sunday ... Diocese of Quebec #d99

A Selection of Psalms and Hymns for the Use of the Diocese of Nova Scotia. 3rd ed. #d261

A Selection of Psalms and Hymns #36d

A Selection of Psalms, Hymns and Anthems, for every Sunday and principal festival throughout the year. for the use of congregations in the dioceses Quebec and Toronto. #P105

Hymns for Social Worship, Compiled for the Use of Canadian Baptist Churches #d224

Hymns Recommended for use in the Reformed Episcopal Church #170

Melodies of the Church #d771

Selections from the Psalms of David in Metre #85

Songs of Devotion for Christian Assocations #350

The Churchman's Hymn-Book, a Collection of Hymns Old and New, for Use in the Services of the Church #d287

The Sacred Harp or Eclectic Harmony #187b

The Whole Book of Psalms #CV.I