O Thou Who Camest from Above

O Thou who camest from above

1 O thou who camest from above
the fire celestial to impart,
kindle a flame of sacred love
on the mean altar of my heart!

2 There let it for thy glory burn
with inextinguishable blaze,
and trembling to its source return
in humble prayer and fervent praise.

3 Jesus, confirm my heart's desire
to work, and speak, and think for thee;
still let me guard the holy fire,
and still stir up the gift in me.

4 Ready for all thy perfect will,
my acts of faith and love repeat;
till death thy endless mercies seal,
and make the sacrifice complete.

Source: Ancient and Modern: hymns and songs for refreshing worship #258

"There let it for Thy glory burn
With inextinguishable blaze,"

have presented difficulties which have caused its omission from many collections. Bishop E. H. Bickersteth, in his Hymnal Companion, has done much towards removing this difficulty by rendering the lines:—

"There let it for Thy glory burn
Unquenched, undimmed in darkest days."

This reading has been adopted by others. Bp. Bickersteth's note thereto explains the cause and meaning of the change:—

" The Editor believes that this admirable hymn would have been far more popular if it had not been for the very long word 'inextinguishable.' Words of five syllables must be admitted into hymns sparingly; but for a whole congregation to be poised on six, practically leads to a hymn being passed by. It is hoped that the line given in the text, which only paraphrases the same thought, will be allowed."

All tunes published with 'O Thou Who Camest from Above'^ top 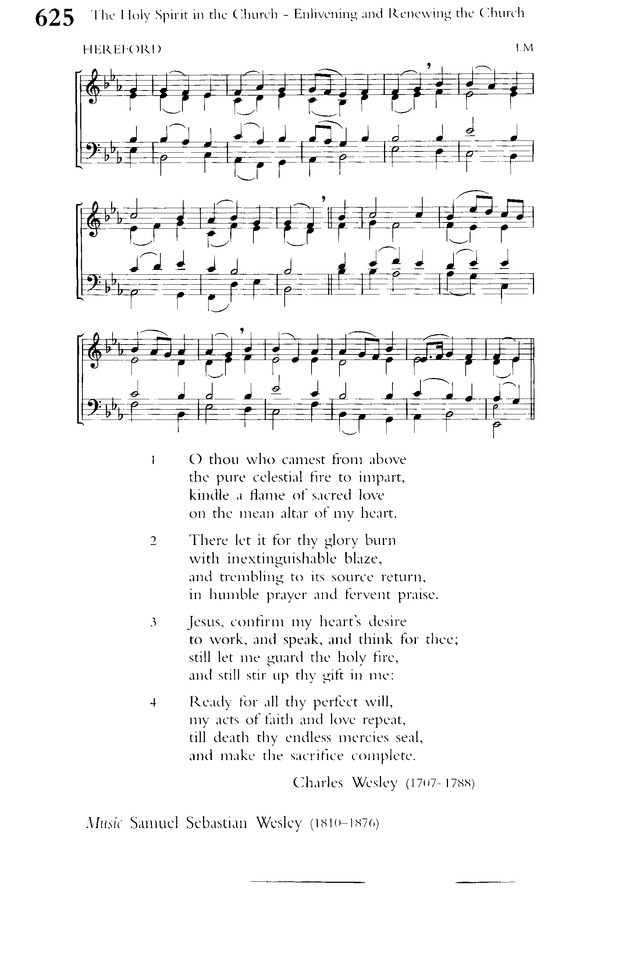 The Irish Presbyterian Hymbook #467a

The Irish Presbyterian Hymbook #467b

The Song Book of the Salvation Army #199